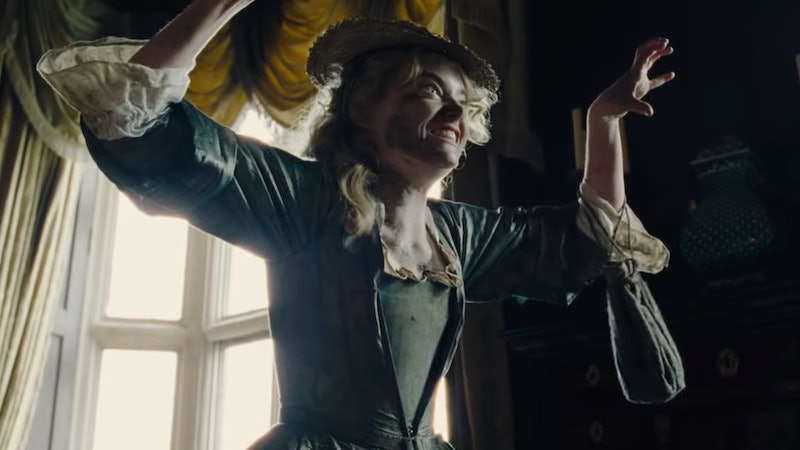 Director Yorgos Lathimos' latest film isn't set in the strange near-future dystopia of The Lobster, but firmly rooted in the past. Well, more like planted in the mud of the past. The Favourite follows intrigue at the court of Great Britain's Queen Anne, as the new queen's childhood friend and confidante has to deal with an upstart contender for the Queen's affection — her own younger cousin. The Favourite is based on a true story that shows history's less boring than often portrayed — far from a stuffy chamber drama, the film is filled with swearing, sex, and literal mudslinging.

The film is set in 1704, two years into Anne's reign. Sarah Churchill, played in the film by Rachel Weisz, was friends with the Queen from childhood onward, becoming her official Lady Of The Bedchamber (a lady-in-waiting position) after the Queen's marriage in 1683. She was banned from the court by Anne's sister (and at-the-time Queen) Mary, who disliked the headstrong, argumentative Churchill, but she was reestablished when Anne took the throne.

But two things happened in 1704 that put Churchill in a precarious position. The Queen had become tired of Churchill's politics and arguments (the Queen was a Tory, while Churchill constantly argued for the Whig political party's ideas), and she'd procured a position in the Queen's household for her destitute cousin Abigail (played in the film by Emma Stone). While the movie says Abigail's father gambled her away in a card game, in reality her father had made terrible speculations and lost the family's money. Sarah was away from the court a great deal that year, and Abigail slowly began to grow in favor with the Queen. The film posits this was partly because of Abigail's knowledge of herbs to cure the Queen's gout (an illness Queen Anne actually suffered from that debilitated her so badly during her later reign she required a sedan to move around), though some historians have pointed to Abigail's gentler nature from her cousin as likelier reason. Friend Jonathan Swift described Abigail as "of a plain understanding, of great truth and sincerity …of an honest boldness and courage superior to her sex, firm and disinterested in her friendship and full of love, duty and veneration for the Queen her mistress."

Whatever the case, Abigail was on the rise and Sarah was out of favor. The film paints this as an all-out war with both women literally fighting for the Queen's attention, firing shots, playing dirty, and wreaking havoc.

The film also certainly doesn't shy away from sex. While sites like The Daily Mail point out the rumors and accusations of a sexual relationship between Queen Anne and each of her court mates, some made by Churchill herself after she'd been kicked out of court — the burned courtier went so far as to write a memoir revealing the Queen's letters to her, filled with lines like "'I hope I shall get a moment or two to be with my dear, that I may have one dear embrace, which I long for more than I can express" — The Favourite goes a step further than insinuation, though as Lathimos expressly told Indiewire, "I just wanted to deal with these three women as human beings. It didn’t matter that there were relationships of the same gender."

While the film may paint a slightly more salacious portrait of history than you're used to, the truth is there was more court intrigue in one year of Anne's reign than all of the Kardashian's years on television. Boring is in the eye of the beholder, and The Favourite should go pretty far in correcting that notion about history.

More like this
Gabby Petito’s Family Responded To The New Lifetime Movie About Her Final Days
By Grace Wehniainen
At 14, Jurnee Smollett Was Taking Meetings With Missy Elliot & Lauryn Hill
By Chloe Foussianes
A New Scooby-Doo Movie Confirmed Velma Is Gay & Twitter Is Pumped
By Radhika Menon
Everything You Need To Know About ‘Black Panther: Wakanda Forever’
By Bustle Editors
Get Even More From Bustle — Sign Up For The Newsletter