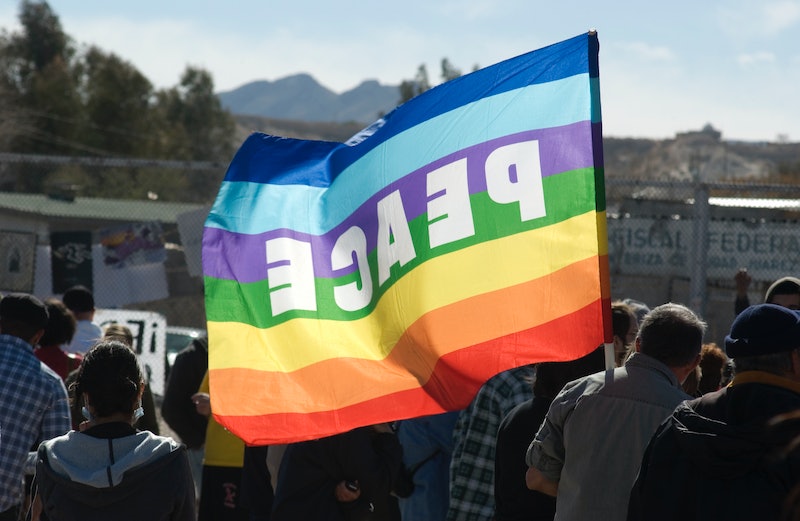 In the years since President Donald Trump’s campaign and election, the FBI has noted a steady increase in reported hate crimes against certain communities. The FBI’s latest hate crimes report shows that, while hate crimes overall may have decreased slightly, attacks on the Latinx community hit a 16-year high. The LGBTQ community also faced an increase in attacks, with crimes against trans or non-binary individuals increasing by 42% since 2017. In fact, the report found that hate crimes against people, rather than property, increased from 2017 to 2018 — but only a fraction of police departments across the country sent data to the FBI. Now, advocates from various U.S.-based organizations, are calling out Trump’s history of biased remarks as a source of fuel behind the uptick in attacks.

“Given President Trump’s incendiary — and often false — rhetoric about immigrants, it is not surprising that the FBI reports a nearly 14% increase in hate crimes against Latinos in 2018,” wrote Heidi Beirich, director of the Intelligence Project at the Southern Poverty Law Center, on the organization’s website.

After the report’s release on Nov. 12, many took to Twitter to highlight how they think the president’s comments have coincided with an increase in violence against minority groups. Wendy Suares, a news anchor for KOKH in Oklahoma City, recalled the Aug. 3 shooting at a Walmart in El Paso, Texas, where a gunman killed 22 people. “The data coincides with an ongoing debate over U.S. President Donald Trump’s hardline immigration policies and follows the August mass shooting at a Walmart in El Paso, Texas, when the suspected gunman told police he was targeting Mexicans,” she tweeted.

Janet Murguía, president and CEO of Hispanic community advocacy organization UnidosUS, called upon the president to be more mindful of the consequences his words have on minority communities. “We’re saddened but not shocked that the number of violent hate crimes against Hispanics has increased,” Murguía said in a statement sent to Bustle via email. “President Trump frequently refers to Latinos in the most hateful and bigoted ways, and words matter.”

Since announcing his bid for office, Trump has had a history of making remarks that disparage Black, Latinx, Muslim, and other communities. The president has referred to Mexicans in particular as “rapists,” and Central Americans as criminals. “President Trump should be aware that in the community’s mind, he bears some responsibility for the increase in hate crimes against Latinos,” Murguía said.

While advocates weren’t shy to call out the president as a major factor in rising hate crimes, LGBTQ rights activists at Human Rights Campaign (HRC) also noted that the FBI’s data on hate crimes is inherently incomplete. Because local police aren’t required to report all crime statistics to any federal agency, the FBI was only able to obtain data from some departments. Wyoming and Alabama reported no hate crimes, but it’s important to consider that laws delineating what constitutes a hate crime vary state to state; in Alabama, for example, crimes motivated by bias around sexual orientation are not considered hate crimes.

“We need mandatory hate crimes reporting across the country, better training for law enforcement officers to recognize bias-motivated crime and greater inclusion and equity in our communities,” HRC President Alphonso David said in a statement on Nov. 12.

HRC also highlighted the fact that the FBI’s data only paints a partial picture of the current state of hate crimes. In their report, the FBI notes that “87.4% of agencies participating in the Hate Crime Statistics Program reported that no hate crimes occurred in their jurisdictions.” That means that upward of 15,000 law enforcement agencies claim that no hate crimes whatsoever occurred in their jurisdictions. It’s also been widely reported that at least 50% of hate crime victims never report the incident to law enforcement at all.

Unlike other types of violence, hate-based violence is meant to instill fear not just in survivors, but in other members of the community, according to the International Society for Traumatic Stress Studies (ISTSS). According to the ISTSS, the prevalence of hate crimes is rising globally. Their report on the trauma caused by hate-based violence points out that there are many barriers in place that stop survivors of hate crimes from getting help, including fear of retaliation, lack of trust, and post-traumatic stress.

Though incomplete, the data sheds light on the fact that many vulnerable communities in the United States face the threat of violence simply for belonging to their communities. However, until federal oversight of these crimes increases, the data will likely remain fragmented. “It troubles us, and it should trouble everyone, that Latinos just going about their day in the most ordinary of ways are being targeted simply because of who they are,” Murguía said.