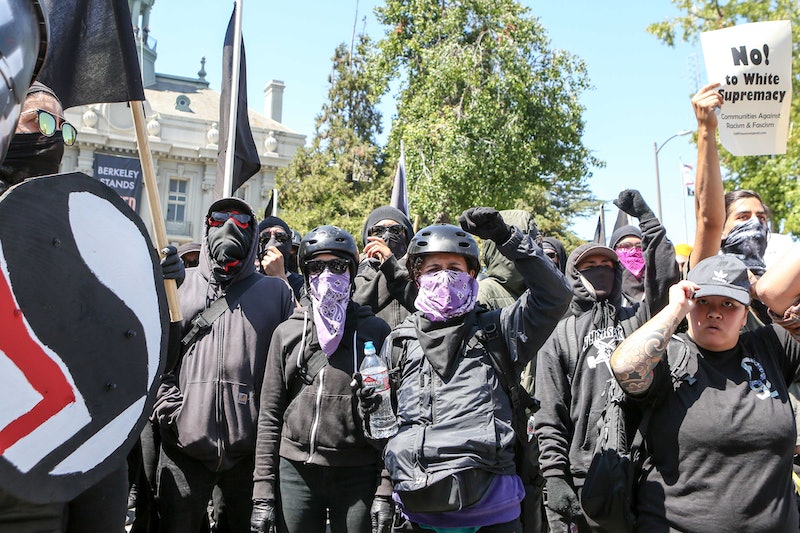 The first few months of the Trump administration have seen a rise in protest movements and unrest, whether they're large peaceful marches, or events like the white nationalist rally in Charlottesville that turned violent and led to the death of a counter-protester. After the country's attention turned to the rise of white supremacist and neo-Nazi groups, it's also looked more closely at the rise of their opponents, Antifa, short for anti-fascist. And according to Politico, the FBI has classified Antifa activities as "domestic terrorism violence" and is warning of future attacks by the movement.

According to the report, confidential FBI documents going back to April warn of a rise of violent opposition from anarchists and others opposed to "police, government and political institutions, along with symbols of 'the capitalist system,' racism, social injustice and fascism." The documents warn that the rise of Donald Trump's campaign and presidency, as well as the spike in hate groups, have led to an increase in both support and intensity of these groups, and that actions by Antifa and white nationalists can lead to growth in each other as backlash response.

Some on the left are concerned by this FBI report, feeling that it feeds into a desire by some (such as President Donald Trump himself, critics say) to treat white supremacists and those who oppose them as morally equivalent. By equating people who take to the streets opposing hate with neo-Nazis and white supremacists, it essentially defends the latter.

These concerns come in the midst of criticism of what seemed like police inaction to violence by white supremacists in Charlottesville, as well as numerous think pieces asserting that Antifa should be treated as just as dangerous an ideology as white nationalists. Many have also decried what they see as an overly draconian response by law enforcement to the Disrupt J20 protests on inauguration day, when 214 people were charged with felony rioting.

For many on the left, law enforcement treatment of protest movements are treated with intense concern and skepticism, due to memories of the FBI's infiltration and attempt to disrupt the Civil Rights and anti-war movements in the 1960s. In one prominent incident, the FBI sent a letter to Martin Luther King, Jr., urging him to kill himself.

Federal law enforcement has long treated white nationalist and far-right extremists as a threat and infiltrated them. Numerous studies have found that right-wing instigators are a bigger threat of violence in the United States than left-wing agitators or even Islam-related terror.

There have been notable incidences of violence perpetrated by Antifa, and while the group usually advertises itself as purely a response to violence and the rise of fascist ideologies, there have also been reports of them instigating violence against ideological foes, such as at an otherwise peaceful counter-protest in Berkeley last weekend.

The rise of Antifa in the public consciousness, as well as the swift backlash, reflect a continued division in American politics and society. If the FBI report is accurate, and the rise of Antifa leads to increased recruitment by white nationalist groups, and vice versa, heated confrontations may only get worse.