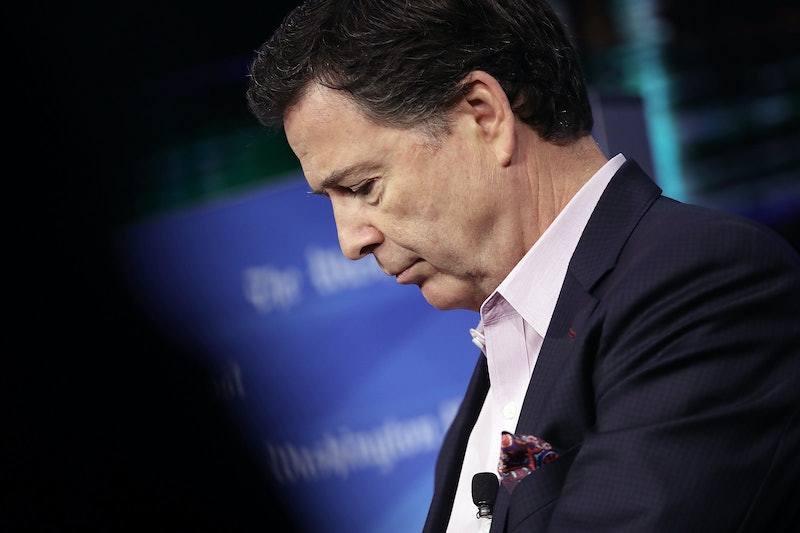 Former FBI Director James Comey's handling of the Hillary Clinton email investigation has been a subject of controversy for nearly two years. On Thursday, the DOJ watchdog released a highly anticipated report about the FBI's Clinton email probe, specifically focusing on how the FBI and the DOJ handled the investigation.

The full report — all 568 pages of it — is available here. In it, Department of Justice Inspector General Michael Horowitz said that Comey did not properly communicate with then-Attorney General Loretta Lynch on two separate occasions in 2016: Once in July, before his press conference on the Clinton email probe, and again in October, when he wrote a letter to Congress about the probe.

“We found it extraordinary that, in advance of two such consequential decisions, the FBI director decided that the best course of conduct was to not speak directly and substantively with the attorney general about how best to navigate those decisions,” Horowitz detailed.

Horowitz concluded that Comey's decision-making in the Clinton email probe "negatively impacted the perception of the FBI and the department as fair administrators of justice,” but that Comey was not acting from "political bias." Horowitz wrote that Comey "deviated" from FBI and DOJ procedures when he reopened the email investigation, Horowitz said.

Donald Trump — who fired Comey last May — has been calling on Horowitz to release this report for some time. He tweeted his eagerness last week to see the DOJ report on "Crooked Hillary and Slippery James Comey," and said he hoped that the "numerous delays" in its public release were not as a result of the report "being changed and made weaker."

According to Bloomberg and Vox, Horowitz's conclusions went beyond suggesting that Comey had deviated from department regulations. Horowitz also concluded that Comey did not have the authority to determine what a "reasonable prosecutor" should have done in the Clinton email probe. His agency, the FBI, was responsible for conducting an investigation, while the DOJ was responsible for deciding whether or not Clinton should have been charged.

In his report, Horowitz also referenced FBI lawyer Lisa Page and FBI agent Peter Strzok, Page's lover. Earlier this year, a September 2016 text message exchange surfaced in which Page and Strzok mentioned that Obama wanted “to know everything we’re doing.” Conservatives have since attacked Page and Strzok for anti-Trump bias, but Horowitz's report found that their “improper considerations” did not impact their investigative actions in the Clinton email probe — even if they did demonstrate political bias.

“We found no evidence that the conclusions by department prosecutors were affected by bias or other improper considerations,” the report said. “Rather, we concluded that they were based on the prosecutor’s assessment of facts, the law, and past department practice.”

Horowitz concluded that several of the FBI agents' exhibited anti-Trump, pro-Clinton biases during the investigation, those biases didn't affect any actions they took over the course of the probe. To the extent that anti-Trump bias within the FBI did have an impact, it was largely on the bureau's reputation, Horowitz concluded.

Horowitz added that "employees’ use of FBI systems and devices to send [anti-Trump] messages demonstrated extremely poor judgment and a gross lack of professionalism," and may have been a violation of internal FBI protocol. Ultimately, though, the report concluded that the FBI agents' personal political views did not affect the course of the Clinton investigation.