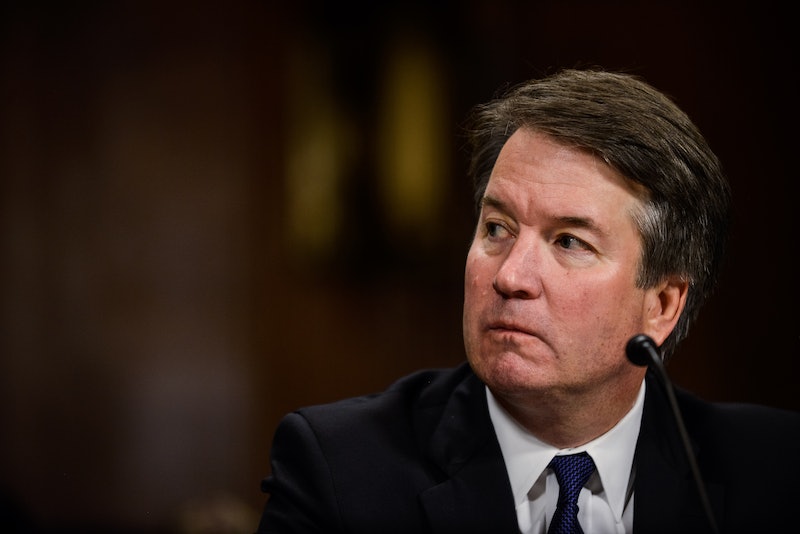 As of this Sunday, according to her lawyer, the FBI spoke with Deborah Ramirez as a part of its investigation into the allegations against Brett Kavanaugh. Ramirez is the second woman to accuse Kavanaugh of sexual misconduct. In a piece by The New Yorker, she detailed a moment in college when Kavanaugh allegedly exposed himself to her at a party. The SCOTUS nominee has denied Ramirez's accusation.

In his opening remarks before the Senate Judiciary Committee last Thursday, Kavanaugh said, "I’ve never sexually assaulted anyone. Not in high school, not in college, not ever. Sexual assault is horrific."

Since his hearing, an FBI investigation has been opened into the allegations against Kavanaugh. And though there has been controversy over the scope of the investigation, Ramirez's lawyer, John Clune, confirmed via Twitter that Ramirez spoke with the agents running the probe. Clune added that Ramirez provided the FBI with a list of witnesses to corroborate her claims. According to him, the agents were "clearly motivated" to investigate the matter.

However, Clune wrote in a subsequent tweet, "Though we appreciated the agents who responded on Sunday, we have great concern that the FBI is not conducting — or not being permitted to conduct — a serious investigation."

“It is inconceivable that the FBI could conduct a thorough investigation of Dr. Ford’s allegations without interviewing her, Judge Kavanaugh, or the witnesses we have identified in our letter to you."

NBC reports that the investigation might wrap up as early as Thursday. What's more, two sources confirmed to NBC that the FBI has not returned Ford's lawyers' calls.

On Monday evening, NBC revealed that Kavanaugh might have made efforts to refute Ramirez's claim before it even went public. Specifically, text messages acquired by NBC reveal that Kavanaugh supposedly asked classmates like Kerry Berchem to defend him under oath, prior to the release of the New Yorker story.

In a statement to NBC, Berchem said,

I have no direct or indirect knowledge about any of the allegations against him. However, I am in receipt of text messages from a mutual friend of both Debbie and mine that raise questions related to the allegations. I have not drawn any conclusions as to what the texts may mean or may not mean but I do believe they merit investigation by the FBI and the Senate.

Berchem says that she has been trying to communicate with the FBI about these claims, but has yet to be contacted by the bureau. Kavanaugh has yet to comment publicly about this latest report by NBC.

However, to Sen. Orrin Hatch on Thursday at the Senate Judiciary Hearing, Kavanaugh explicitly said that he first heard of Ramirez's claims "in the New Yorker story."