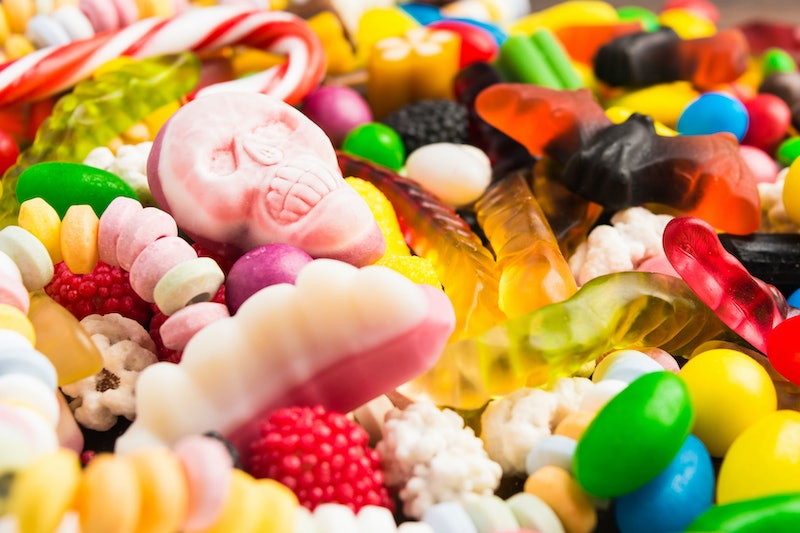 On Oct. 5, the United States Food and Drug Administration (FDA) banned seven artificial food additives commonly found in commercial baked goods, candies, and ice cream, after lab studies showed that they could cause cancer in animal studies. According to the FDA’s official statement, the seven food additives now banned include benzophenone, ethyl acrylate, eugenyl methyl ether, myrcene, pulegone, and pyridine. These food additives are used to imitate natural flavors such as cinnamon, citrus, and mint, according to Forbes, which also notes that these now-banned food additives are commonly found in breakfast cereals, chewing gum, and mints, among other packaged foods. An additional additive, called styrene, is also being banned since it’s no longer in use in the commercial food industry, per the FDA’s press release.

NPR reports that the delisted food additives aren’t usually shown on packaging labels since manufacturers are allowed to label them as just ‘artificial flavors.’ The FDA decided to officially ban these additives after reviewing a petition submitted by a number of environmental and consumer groups, including the Center for Food Safety, the Center for Science in the Public Interest, and the Natural Resources Defense Council. NPR further reports that the FDA is giving food manufacturers 24 months to remove the additives from their products and come up with new recipes, but that they will no longer be allowed for use in commercial foods due to the potential carcinogenic effects.

NPR further notes that the FDA stated that these artificial flavorings do not pose a public health risk when used in small amounts. Per the press release, the FDA states, “The synthetic flavoring substances that are the subject of this petition are typically used in foods available in the U.S. marketplace in very small amounts and their use results in very low levels of exposure and risk … While the FDA’s recent exposure assessment of these substances does not indicate that they pose a risk under the conditions of their intended use, the petitioners provided evidence that these substances caused cancer in animals who were exposed to much higher doses.”

Erik Olson of the Natural Resources Defense Council (NRDC) told NPR that “We think this is a win for consumers. ... The law is very clear that any chemical that causes cancer is not supposed to be added to our food supply.”

Per NPR, the Delaney Clause is an amendment of the Food, Drugs, and Cosmetic Act of 1938, which states that if a food additive or ingredient is found to cause cancer in humans or animals, it’s illegal for use in the U.S. food supply. Olson further explained to NPR that the now-delisted food additives are typically found in everything from packaged foods, frozen dairy items, sodas, and beer — and since manufacturers aren’t required to disclose them on packaging labels, it’s difficult to know where they’re being used and in which foods.

According to Forbes, the food additive data presented to the FDA by consumer advocacy groups was based on research linking benzophenone exposure in rats to increased rates of leukemia, kidney and liver diseases, and other cancer-related health problems. And while the banned food additives may be present in packaged foods for the next two years while manufacturers work to remove them, you can avoid them by looking for ‘artificial flavors’ on food packaging labels if you’re worried about exposure.