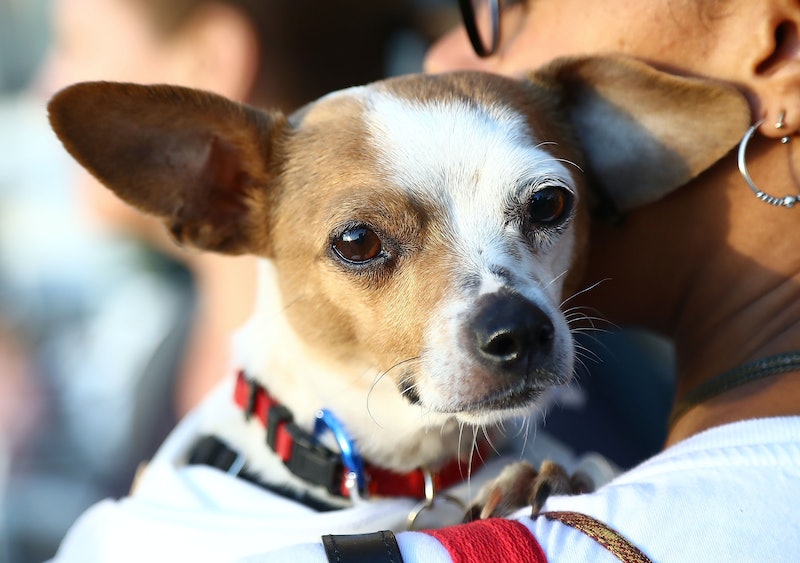 It's coming around to the present-giving time of the year, and naturally those of us with furry friends are thinking about their necessary inclusion in the bounty. (My extremely charming cat may have received more Christmas stocking stuffers last year than I did, and I still may not quite be over it.) However, this year, the U.S. Food & Drug Association has issued a warning that you should not give your dogs processed bone treats. They've released an entire consumer warning, entitled "No Bones About It" for the punsters among us, that warns that dried processed bone treats for dogs have been the subject of concern and are not viewed to be safe. The FDA hasn't proposed an official recall, so no specific products are under the microscope, but the FDA also encourages all pet owners to report any product that might have caused their pets to get ill, and has extensive guidelines on how to report potentially dangerous pet food.

Most dog owners know that chicken and turkey bones from roasts and other leftovers aren't acceptable for dogs, because of their brittleness and propensity to shatter and cause lacerations or digestive issues. But the FDA, which mediates the U.S. market in food and consumable consumer products, is now taking the step of issuing the release because it says it's received 68 different reports involving 90 dogs about pet injuries reportedly related to processed dog bone treats. The problem? Unlike the bones you might get from a butcher, many bone treats from pet stores and pet food manufacturers go through a drying process and might include preservatives or other ingredients that could prove dangerous to animals.

It's suggested that the process of domestication for dogs began when wild wolves began scavenging around human settlements for the remains of their food, though we're not entirely sure if this is accurate. So this warning against bone products may surprise dog owners, who probably assumed their dogs were more or less equipped to deal with bone products because of their evolution. However, the treatment of bones to make them into treats reportedly might make them harmful. The FDA reports that 15 dogs have died after eating processed bone treats, and the others allegedly have suffered from illnesses as diverse as digestive tract blockage, cuts on the mouth, bleeding from the rectum, choking and vomiting. And seven reports to the FDA involved allegedly defective bones, including ones that splintered when the dog bit them. (They are not meant to do that.)

Chewing is a natural part of dog behavior. The ASPCA notes that it's been seen in both wild and domesticated dogs, and that dogs chew "for fun, they chew for stimulation, and they chew to relieve anxiety." The problem isn't that dogs themselves are doing anything abnormal or strange when chewing on a bone treat, so it's not sensible for dog owners to attempt to stop chewing altogether (unless it involves their shoes). But with bone treats off the menu, consulting with a vet about the right types of chew toy — from uncooked meat bones sourced from the butcher to artificial toys — is the correct next step, according to the FDA. If you've been using bone treats to help train your dog, switching over to other treats will likely not have a big effect on their behavior.

The particular products the FDA mentions have names like “Ham Bones,” “Pork Femur Bones,” “Rib Bones,” and “Smokey Knuckle Bones,” so it pays for dog owners to be aware of what they're putting in their shopping carts. As with all other purchases, just because something says it's "all natural" doesn't necessarily mean it's safe.

If you've purchased bone treats and can return them to the point of purchase under the rules of the store, it may be a good idea to do so. And the FDA emphasizes that if your dog's eaten something and is behaving oddly, you need to get them to the vet immediately. Nothing spoils the holidays faster than a sick pupper.