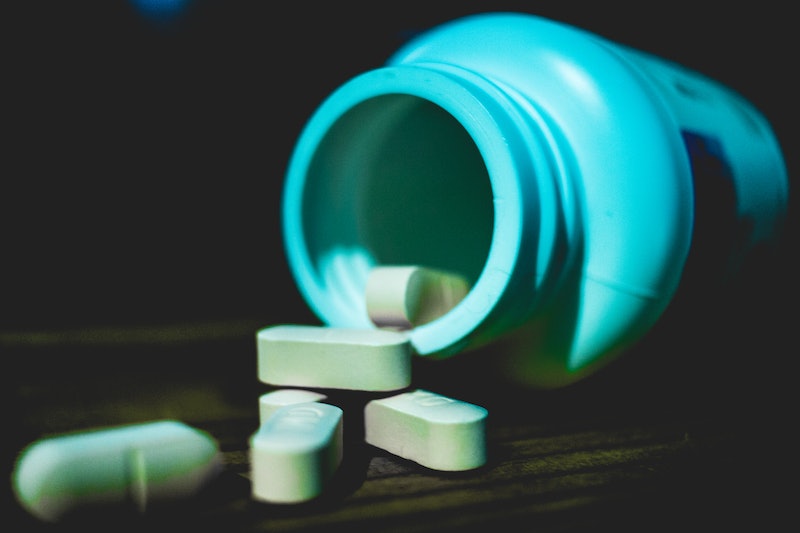 Research suggests that more than half of all patients tell their doctors they’re taking their medicine exactly as prescribed when they’re really not. Lying to your doctor can lead to incorrect diagnoses and unnecessary trips to specialists. Lying can even negatively impact your health if your doctor prescribes the wrong medicine or dosage based on false reports. But doctors may not have to rely on their patients to tell the truth anymore. The Food and Drug Administration (FDA) recently approved a digital pill that tracks when patients take it. The future is now, folks.

Abilify MyCite, the name of the new drug, is the brand-name version of a drug used to treat mental health conditions, such as schizophrenia and bipolar disorder. The pill tracks patient use through an embedded sensor. Wait, wouldn’t swallowing a sensor kind of... hurt? Nope. The sensor is about the size of a single grain of sand and it activates when it comes into contact with stomach fluids. This new technology is a great tool for doctors and patients who want to closely monitor the affects of medicine.

If you’re getting 1984 vibes from the whole concept, you’re not alone. “If used improperly, it could foster more mistrust instead of trust,” Ameet Sarpatwari, an instructor in medicine at Harvard Medical School, told the New York Times.

The medicine also comes with a smartphone app that allows the patient to share data with their doctor and four other people (usually family members). Although use is voluntary and the patient can block recipients from getting information about their medicine intake at anytime, some worry that the sensor and the app will cause patients to feel forced to take their medication.

The FDA addressed this concern in its official announcement of MyCite’s approval: “It is important to note that Abilify MyCite’s prescribing information (labeling) notes that the ability of the product to improve patient compliance with their treatment regimen has not been shown.”

Some experts believe digital pills are best for people who want to take their medicine but have trouble remembering — not for folks who feel forced. Because of the nature of surveillance associated with digital pill, medical professionals were surprised that the first digital pill to be approved will be used to treat schizophrenia. Dr. Paul Appelbaum, director of law, ethics and psychiatry at Columbia University's psychiatry department, told the New York Times that "many of those patients don't take meds because they don't like side effects, or don't think they have an illness, or because they become paranoid about the doctor or the doctor's intentions. You would think that, whether in psychiatry or general medicine, drugs for almost any other condition would be a better place to start than a drug for schizophrenia."

In their official announcement, the FDA outlined the typical symptoms of schizophrenia as “hearing voices, believing other people are reading their minds or controlling their thoughts, and being suspicious or withdrawn.” Bipolar disorder symptoms include "alternating periods of depression and high or irritable mood, increased activity and restlessness, racing thoughts, talking fast, impulsive behavior and a decreased need for sleep."

Dr. Walid Gellad, co-director of the Center for Pharmaceutical Policy and Prescribing at the University of Pittsburgh, told NPR that there are positive elements of a pill that tracks patient intake. "You will actually know if a person has taken the pill, put in in their mouth, and it's in their stomach,” he says. He also acknowledged the security concerns associated with the digital pill.

"We've seen time and time again that stuff that's being transmitted ends up in the hands of people it shouldn't," Gellad says. "There are real concerns about data security."

For those who aren’t taking a digital pill that lets doctors monitor medicine intake, it’s so, so important to be honest. “I tell [patients], ‘You can lie to your friend, you can lie to your family members, but you came here for help, and your report will determine the treatment plan. If I undermedicate you, you may have seizures and die,”’ Dr. Akikur Mohammad told NBC News.

What medicines you do or do not put in your body can have a drastic affect on your health. Being transparent with your doctor can literally save your life.