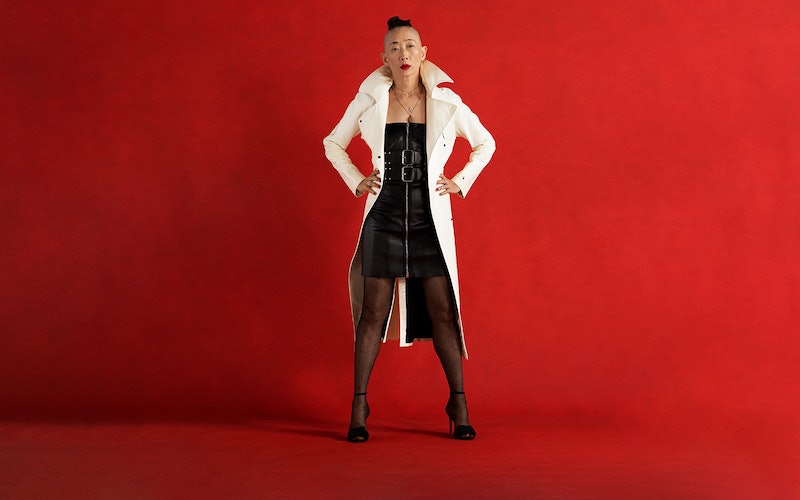 Sophia Chang is a living legend. At 54, her storied resume starts in the music business in 1980s New York City — a career that led her to become the first Asian woman in hip hop, ultimately becoming manager for members of the legendary Wu-Tang Clan — but that's not where her story ends. That union put Chang's life on a path that led her to a Shaolin monk who would become her partner, a journey into motherhood, and defining shifts that would force her to decide what kind of woman she wanted to be — and she's finally ready to tell her story.

In her Audible Original by Hello Sunshine, The Baddest Bitch In The Room, Chang shares the intimate details of how she's lived a life full of dismantling biases about what it means to be an Asian woman. From the board rooms of some of hip hop's most powerful record labels, to a defining journey to the Wudang mountains, The Baddest Bitch In The Room inspires anyone who’s ever struggled with defining their limits.

To give Bustle readers a taste of everything The Baddest Bitch In The Room has to offer, we partnered with Audible to talk to Chang about all things fearless — from diving back into the dating scene in her 50s, to changing careers, to shattering one stereotype after the next.

You mention that it wasn’t until you were 50 that you were ready to tell your story. Why is now the right time?

I wasn’t ready before I turned 50. I spent my entire 30-year career helping remarkably talented men tell their stories and it simply didn’t occur to me that mine was worth telling. That changed when I started working at [a music group] in 2014 and took on a number of young female mentees, and then the idea crystallized three years later when I participated in [a film program]. A film I was producing was chosen to be part of this event that gives you a very limited time to pitch your project to buyers.

I narrowed my resume to 60 seconds and almost every time the buyer said, "Now that’s the movie I want to see!" Although I have never fulfilled the Model Minority Myth — that I, as an Asian Canadian am not supposed to stand out, play by the rules, never upset the apple cart — I did internalize it to the point of not wanting to be in the spotlight. Obviously, that’s changed.

In The Baddest Bitch In The Room, you discuss that you admired how one of your clients valued himself while negotiating. Looking back, what did being in this job teach you about valuing yourself?

Managing [a prominent hip hop artist] taught me to be truly in service of the artist, whereas doing A&R — being the talent scout who helped get an album made and shepherd it through the system — you are beholden to the label as its employee. Working with [that artist] elevated my negotiating game. He once said to me "Soph, you’ve gotta get me more money." I realized that the fact that I don’t care that much about money is irrelevant because, again, I am in the service of my client. So I learned how to read contracts and negotiate, and now I’m an animal at it and I love the art of the deal.

You write that you were warned not to sleep with artists or you’d be “done" in the music business. How did that make you feel at the time? Would you react the same way today?

It enraged me then, as it does now. It’s all about patriarchy, isn’t it? It’s the whole pimp/ho binary: A man is lauded, high-fived, and patted on the back for sleeping with a bunch of women, but women are shamed and branded with the scarlet letter. If someone told me that now, I would say "suck a d*ck," because I can sleep with anyone that I want and that by doing so, I am neither a lesser nor greater woman.

How did you know that it was time to move on to other career opportunities?

If you read my [resume], you’d be stunned by the number of jobs in different sectors that I’ve had. I was never very conflicted about leaving one job and taking on another, even if I knew nothing about it. Partly because I had the privilege of a middle-class safety net, partly because, again, my confidence. If I f*cked up or got canned, I always knew that there would be another hustle for me. Other than with my ex, I never attached my identity too tenaciously to any one position. I think that’s a potential recipe for disaster — what happens if you get fired? Are you lost because you no longer feel whole? No, thank you.

What was your motivation for beginning kung fu training?

I never had to work out to stay thin, thanks to my mother’s hummingbird metabolism, but as I neared 30, I wanted to be more fit so I started going to the gym, which I found so boring. Then I met Wu-Tang Clan and they introduced me to kung fu flicks and the beauty of Asian culture in general, which I had rejected from childhood. I decided I wanted to start to train.

I had no idea that training would lead to me being at my strongest at 54 and the man I would partner with in business and life and parenthood. That’s a profound gift and I owe that to the Clan!

How did your priorities change when you became a mom?

My priorities changed completely as a mother. The second I gave birth I knew two things with utter certainty: That I would die for my child in an instant, and that I would kill for my child just as quickly. My child’s safety is my primal and primary concern such that every single move I make is for them — from the jobs I take to where we live to the men I date.

I don’t have a relationship with current hip hop. As a 54-year-old mother, I think it would be weird if I said that the music of today is the soundtrack to my life. It doesn’t mean I don’t enjoy certain songs and artists, but the music doesn’t speak to me the way it used to. To be clear, that’s neither a judgment nor indictment of the music; I simply got too old for it. In my eyes, it’s the most youth-centered genre of music: it’s made by the young, about the young, for the young. My 17-year-old daughter and 19-year-old son are total hip hop heads, thank god, and they tell me anything I need to know. I love and respect the culture because it gave me so much, but it’s no longer the music I listen to on the daily.

I'm curious: What's it been like to dive back into the dating scene in your 50s?

I was 42 when I left my ex and hadn’t been single since I was 30, which was in 1995. Well, guess what happened in the meantime? The internet and smartphones. When I emerged from that relationship I felt like ... "Wait, you send pictures of what, how?" But let me tell you, once I crossed that line, I was an instant pro.

What's next for Sophia Chang?

Well, at 54 I have a new career: I’m an author. I have more books in me for sure. I also have a number of TV shows in development, one that’s a scripted project about me. I will be a showrunner one day and make sure that my Asian sisters and brothers are brought into the writers’ rooms and we are properly represented.

So: What's the secret to becoming the baddest b*tch in the room?

I don’t know that there’s a secret to becoming the baddest b*tch in the room. What I do know is that it starts by self-examination and self-celebration. I hope my memoir inspires women to mine their power and see their beauty. It’s not only the amazing aggregate of our qualities that makes us the baddest b*tch in the room, it’s also claiming it. I know that’s hard, but more of us need to get there if we’re going to rule the world, right?