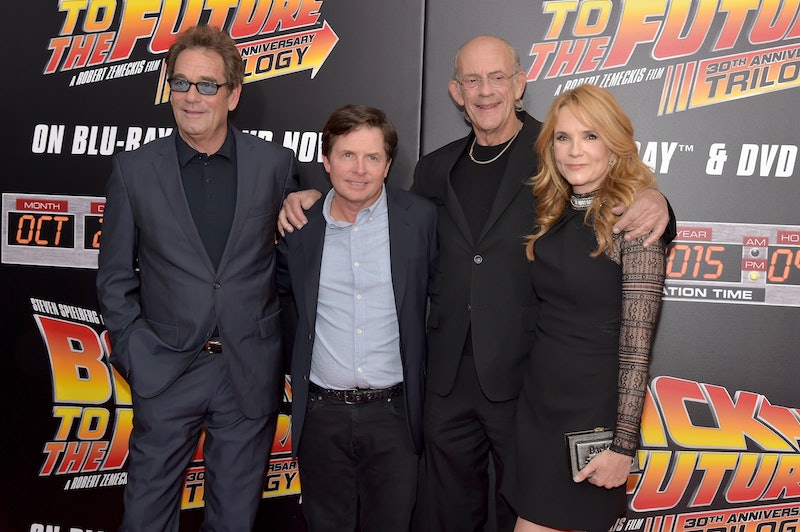 Great Scott, Back to the Future is becoming a musical — and the first original song from the production is here. "Put Your Mind To It," an original Back to the Future: The Musical song arrived Monday, June 10, on the heels of the 73rd annual Tony Awards. It's the first real taste of the musical set list for an upcoming stage adaptation, set to debut in February 2020.

The show, of course, is based on the 1985 film of the same name and will follow the adventures of Marty McFly, Doc Brown, and a time-traveling DeLorean . Back To The Future: The Musical will debut at the Manchester Opera House in Manchester, England for a 12-week limited run before transferring to London’s West End, per Playbill. Olly Dobson will take on the iconic role of Marty, who was played by Michael J. Fox in the original trilogy of films.

Dobson sings both of the songs released from the show so far. The musical will mix original songs such as "Put Your Mind To It" with classics from the movie soundtrack including the previously released "The Power of Love," first sung by Huey Lewis and the News. Entertainment Weekly reports that other soundtrack songs in the show include, "Johnny B. Goode," "Earth Angel," and "Back in Time."

Soundtrack favorites aren't the only familiar elements fans can expect from the musical. Back to the Future co-writers Robert Zemeckis (who also directed the films) and Bob Gale have joined the creative team. Music and lyrics will be by Alan Silvestri, who worked on the original trilogy and most recently composed the score for Avengers: Endgame, and Glen Ballard, who has worked on musicals including Ghost and the upcoming Jagged Little Pill.

Musicals based on movies have long been a trend everywhere from Broadway to the West End. At the most recent Tony Awards alone, nominated movies-turned-musicals or plays included Tootsie, Beetlejuice, Network, and To Kill A Mockingbird. A musical iteration of Back to the Future has been discussed since as far back as 2014, even switching directors from Jamie Lloyd to John Rando (Gettin' the Band Back Together.) It's unclear whether this musical adaptation will also make its way to Broadway after the original West End run.

Gale, who will be writing the book for the musical, had this to say about the project when speaking with The Hollywood Reporter in May:

"Bob Zemeckis and I have been trying to get this project off the ground for years, but good things take time and finally, the time is right. Our cast is outstanding, the songs are fantastic, and director John Rando is doing an amazing job ensuring the show truly captures the magic of the movie. We're thrilled that we can retell our story on stage in a brand-new way, and we're certain that Back to the Future fans all over the world will share our enthusiasm. In the words of Marty McFly, 'your kids are gonna love it' — and so will you and your parents."

So gather your Plutonium and don't forget your Calvins, because Back to the Future: The Musical will be blasting onto a stage soon.