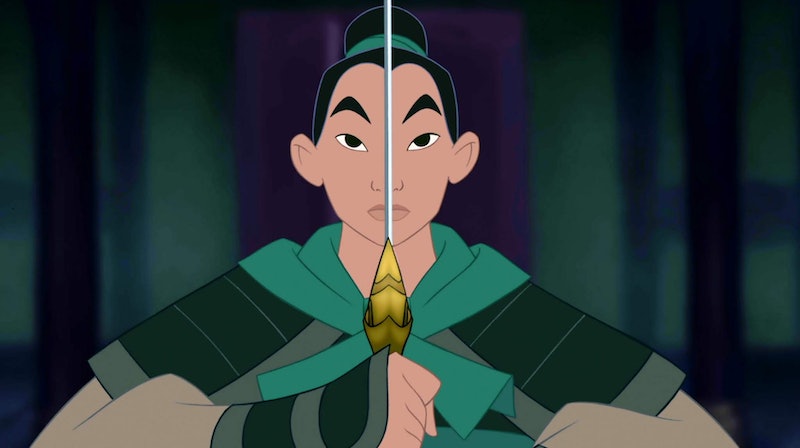 In the most recent news regarding live-action remakes of beloved classics, Disney has just released the first photo of Disney's live-action Mulan. Chinese-American actress Crystal Liu, also known as Liu Yife, is set to play the iconic warrior who goes against her father's wishes and dresses as a man in order to take his place in the Chinese army, despite the fact that it could mean death if she gets caught.

A live action Mulan adaptation has been in the works at Disney for a while, but development stalled as the studio formally announced live action remakes of animated classics Aladdin, The Lion King, and the already-released The Jungle Book. News broke in March that the new movie would be pushed back to a 2020 release date, as opposed to the original late-2018 date.

Filming was also reported to begin this month, and Disney confirmed that with a tweet accompanying the first look at the title heroine. "Production has begun on live-action #Mulan," reads the tweet. In the photo, Liu is seen wielding a sword in a powerful stance, ready to take on anyone who dares to mess with Imperial China. Those villains will be played by Gong Li and Jason Scott Lee. Li will play a witch with unclear motives (so far) and Lee will play a warrior leader who is hell-bent on avenging the death of his father. By what means, fans don't know yet.

The new villains won’t be familiar to fans of the original 1998 Mulan. In fact, other than the main character and her plot to pose as a male soldier in the Chinese army, a lot of the story of the live action movie will differ from the original. Absent from the live action movie will be Li Shang, aka one of Mulan’s war buddy— the captain, to be precise — and, more importantly, her love interest. In his place is a new character by the name of Chen Honghui, played by Yoson An. Honghui is reportedly going to be another soldier in Commander Tung’s unit, where Mulan is as well. And as you’ve probably guessed, they get pretty close. Meanwhile, Commander Tung will be played by Donnie Yen, who appeared in Rogue One: A Star Wars Story.

The new image is definitely a callback to the original cartoon; she’s dressed as Mulan in the image — not her male alter-ego — but is still in a warrior’s position with her sword. This is almost the exact position Mulan finds herself in at the end of the original film, when she’s fighting Shan Yu on the roof while trying to save the Emperor. The outfits are different, the look of determination is the same, along with the upraised palm, and the warning-fingers, letting y’all know that she means business.

Unfortunately, another change will be the removal of the musical aspect of Mulan. There won’t be new renditions of “I’ll Make a Man Out of You” or “Reflection” anytime soon, and definitely not in this Mulan. "Yes, from what I understand, no songs right now, much to the horror of my children," said Niki Caro, the director, according to MovieFone. Maybe Disney is going in a new, more serious direction with this adaptation, like it did with The Jungle Book, which wasn't technically a musical. However, it did still have songs from the original, which might be a good route for Mulan as well. Either way, this new photo is super exciting and the 2020 release date can’t come soon enough.