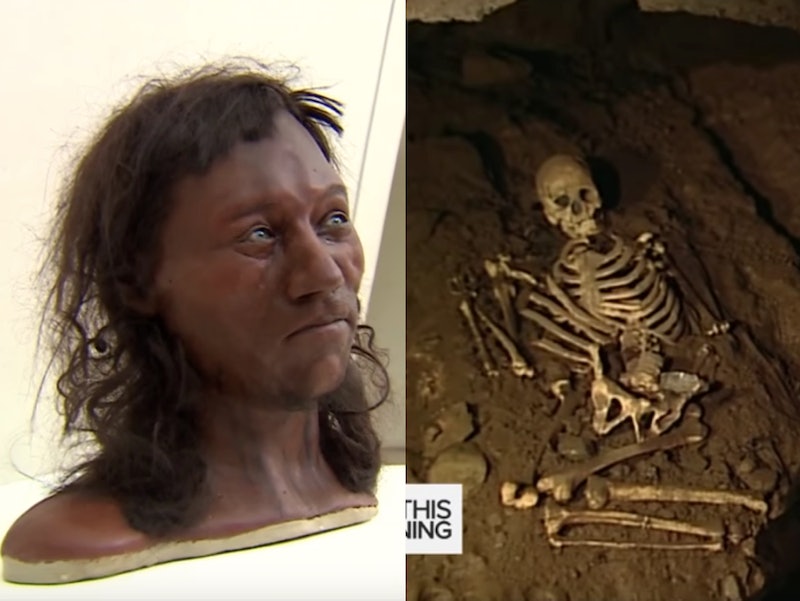 The DNA of “Cheddar Man,” a man who lived over 10,000 years ago and is believed to be the first modern Briton, revealed what the first people in Britain may have looked like thousands of years ago. Researchers from London's Natural History Museum and University College London used Cheddar Man’s DNA to recreate his facial features and, to the surprise of some, the first modern Briton likely had "dark skin, blue eyes, and brown hair," according to a write-up from London's Natural History Museum.

Selina Brace of London's Natural History Museum said in a write-up about the groundbreaking discovery, “If the body was deposited in a good environment, where there was a cool and constant temperature, then the petrous bone is a good place to find useful ancient DNA.” Cheddar Man’s remains were first found over a century ago, in 1903. It’s believed that the cool temperatures in Gough's Cave, located in Cheddar Gorge in Somerset, England helped preserve the DNA found in Cheddar Man’s skeleton.

Scientists retrieved his DNA “by drilling a 2-millimeter hole in his skull and extracting bone powder,” according to The Washington Post. Brace explained the process she and her team used to get Cheddar Man’s DNA, “To extract ancient DNA from a human or animal, what you're looking for is a dense bone which might have protected the DNA inside it as much as possible. We used to use leg bones or teeth as the thick bones and enamel keep DNA quite intact, but in the last two years we've shifted to using the petrous, or inner ear bone, which is the densest bone in the human body.”

The new discovery about Cheddar Man runs counter to many previously held assumptions about Britain’s earliest inhabitants. Dr. Tom Booth, a postdoctoral researcher who investigates human adaptation to changing environments, said in the write-up, “Until recently it was always assumed that humans quickly adapted to have paler skin after entering Europe about 45,000 years ago. Pale skin is better at absorbing UV light and helps humans avoid vitamin D deficiency in climates with less sunlight.”

Cheddar Man’s complexion suggests that he migrated to Britain from sub-Saharan Africa, according to London's Natural History Museum. “He is just one person, but also indicative of the population of Europe at the time,” Booth said. “They had dark skin and most of them had pale colored eyes, either blue or green, and dark brown hair.”

Booth pointed to agriculture becoming more prominent in society as the event that led to paler complexions. “It seems that pale eyes entered Europe long before pale skin or blond hair, which didn't come along until after the arrival of farming.”

According to experts, Cheddar Man wasn’t a farmer. Instead, Cheddar Man was a hunter-gatherer who stood around five feet and five inches and died in his 20s. “Cheddar Man belonged to a group of people who were mainly hunter gatherers,” Booth said. “They were hunting game as well as gathering seeds and nuts and living quite complex lives.” In addition to hunting and gathering, Cheddar Man, and others like him, spent the day carving tools and fishing.

Researchers also believe Cheddar Man was lactose intolerant, like all humans across Europe at the time, meaning he was unable to digest milk. Lactose intolerance is common among people of African descent. According to ProCon.org, 70 to 90 percent of people in present-day Africa are lactose intolerant.

According to those who examined Cheddar Man’s DNA, modern-day British people share about 10 percent of his ancestry even though they’re not direct descendants of him or the group of people he belonged to. If you’re interested in getting a closer look at Cheddar Man, his bust, which was created using 3-D printing, is on display in the London's Natural History Museum Human Evolution gallery.