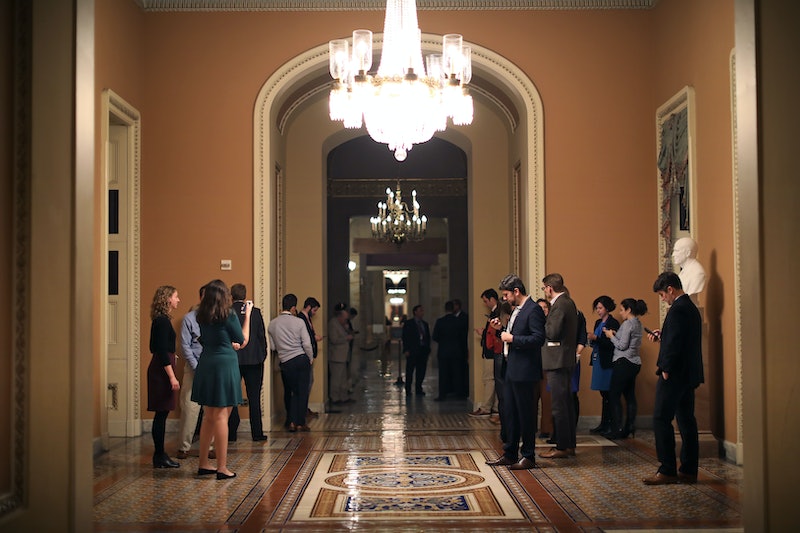 On Thursday, the House passed a criminal justice reform bill containing moderate changes to the federal system, such as proportional sentencing and anti-recidivism programs. The bill, called the First Step Act, already passed the Senate with 87 votes in its favor, and is now on its way to President Trump's desk, where he is expected to sign it. Criminal justice experts tell Bustle that the First Step Act could remedy some of the justice system's most grievous problems, though some say that it should only be the beginning of the federal government's prison reform efforts.

According to Vox, the First Step Act aims to reduce mandatory minimum sentences, and to allow thousands of prisoners to be released early by earning "good time credits." The bill would also incentivize prisoner participation in vocational and rehabilitative programs with early releases to halfway homes, in order to combat recidivism and combat prison overcrowding. Finally, the First Step Act would address the disparity in crack cocaine and powder cocaine sentences, which according to the ACLU has disproportionately impacted black people.

The First Step Act only applies to the federal system — there are 181,000 people in federal prisons currently, according to the Bureau of Prisons — but could nonetheless have a significant impact on the criminal justice system, The Washington Post reported. Ames Grawert, senior counsel in the Brennan Center's Justice Program, tells Bustle that the "First Step Act makes some long-overdue fixes to some of the most broken parts of the system," but argues that it is not enough on its own.

"The bill gives judges more leeway at sentencing, makes overdue, retroactive changes to the way pre-2010 crack cocaine crimes are sentenced, and more," Grawert says. "But the legislation is exactly what the name promises — a first step. Many individuals remain behind bars, sentenced under the decades-old draconian framework that will be changed in this bill. Full retroactivity would have helped them but got left behind."

Passage of the First Step Act has been a bipartisan effort, with both Democrats and Republicans supporting it — although Time reported that Democrats don't believe the bill goes far enough to curb unnecessary incarceration and address racial disparities in sentencing. The bill has also received support from various groups along the political spectrum, ranging from the American Civil Liberties Union to the Fraternal Order of Police.

However, some critics argued that the First Step Act does not go far enough, even though it makes some necessary changes. Vermont Sen. Bernie Sanders tweeted that the government needs to "end cash bail, end private prisons, end mandatory minimums," while California Sen. Kamala Harris described the First Step Act as a "compromise of a compromise" whose "sentencing reforms should be applied retroactively." Harris noted that communities of color, and especially black men, have been disproportionately impacted by unfair sentencing laws, and that this legislation only takes the first step toward remedying that.

New York Magazine pointed out that no second step has been finalized, and that it's unclear how lawmakers plan to follow up on this legislation. According to Essence, critics are also concerned the First Step Act does not restore voting rights or combat job discrimination post-incarceration, despite its attempts to combat recidivism and promote rehabilitation. The ACLU highlighted this particular concern in a statement earlier this month, arguing that while the bill does include some important reforms, it does not retroactively apply all of them, and prevents some inmates from benefiting from its provisions on the basis of citizenship status.

Despite these critiques, however, the bill passed both the House and Senate with overwhelming support — even from lawmakers who don't believe it goes far enough — and it is expected to go into effect once Trump signs it. As NPR pointed out, Trump has been one of the First Step Act's biggest supporters despite his "tough on crime" platform, in part due to Jared Kushner, the president's son-in-law and White House adviser. According to NPR, Kushner has been passionate about criminal justice reform ever since his own father served time in federal prison, and has urged the president to pass this bill before the end of the year.