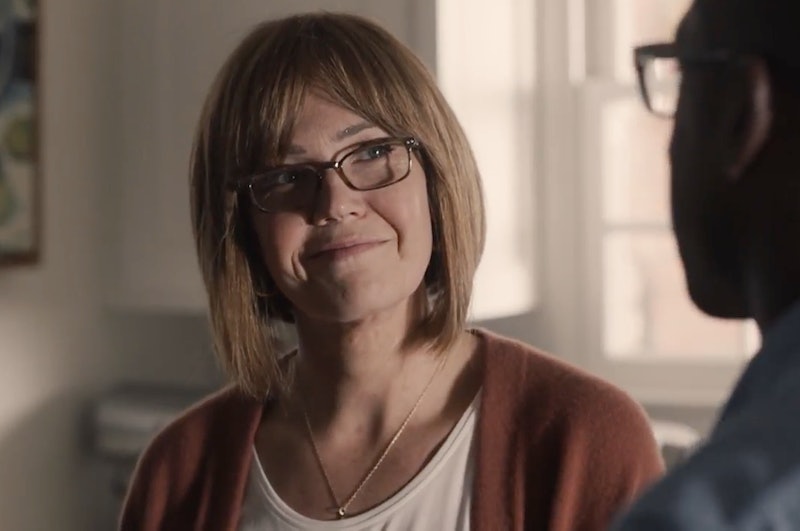 You better go and grab a box of tissues, because the first This Is Us Season 2 clip is here. The scene is an emotional one (of course) featuring Randall and Rebecca discussing adoption. What makes it all the more special is the way Rebecca talks about welcoming Randall into the family as her child.

The conversation comes up after Randall tells his mom that Beth is struggling with the idea of them adopting. In the Season 1 finale, Randall told Beth that he wanted to adopt, which would potentially give them a third child. Well, things don't seem to be going as smoothly as Randall had hoped, but enter Mama Pearson to try to make the situation better for her son.

After some pushing from Randall, Rebecca opens up about how she actually didn't want to adopt him at first, especially since she was grieving the loss of Kevin and Kate's biological sibling. However, that didn't stop Jack from pushing the idea onto Rebecca. As showcased in the pilot, Jack knew from the get-go that Randall would be their son, but Rebecca needed some convincing. She even admits to Randall that it was all very "complicated."

Rebecca then gives Randall some food for thought about marriage, which she seems to hope will help he and Beth come to a conclusion about whether or not they really want to adopt. "Sometimes in marriage, someone has to be the one to push to make the big moves," she tells him. "And often times in our marriage, yes, it was your father."

Then, she makes an emotional declaration that will most definitely bring a tear to fans' eyes. Rebecca says,

"Our marriage wasn't perfect, it's true, but none are. And your father wasn’t perfect, either, but he was pretty damn close. As close as they come. He pushed a stranger on me, and that stranger became my child, and that child became my life. He became you."

Based on this quote alone, the drama clearly hasn't lost its touch — and ability to make viewers cry.

There's no doubt that Rebecca and Randall's relationship has its flaws, but this scene shows just how strong of a bond they have. They love each other immensely and are always going to need each other when it comes to the bigger moments in life.