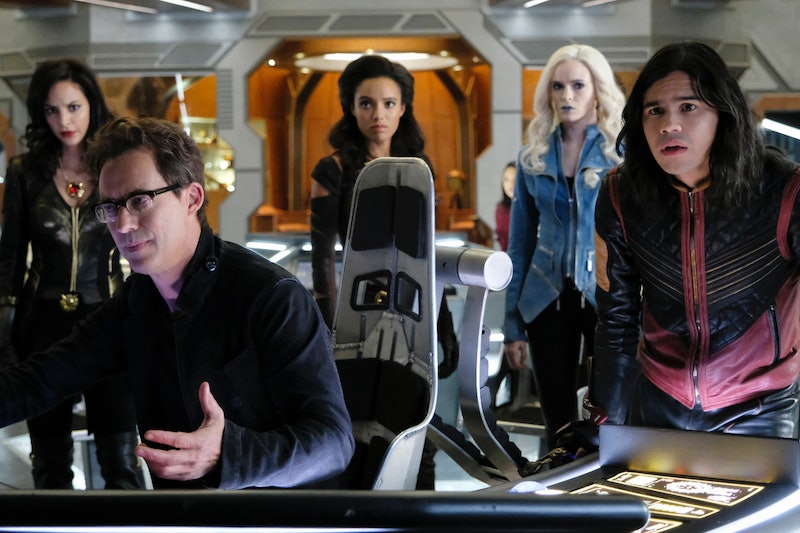 The CW's four-part crossover "Crisis on Earth-X" is one of the network's most ambitious superhero events yet. Unfortunately, this means that Barry and Iris' wedding is on hold until they manage to save the world from the invading horde of Earth-X Nazis. The Freedom Fighters from DC Comics fight alongside the heroes from The Flash, Supergirl, Legends Of Tomorrow, and Arrow in the crossover. And this comic book alliance is the perfect inspiration for the CW good guys as they begin their final showdown.

In the comics, the Freedom Fighters are a team made up of heroes who want to bring back democracy and freedom in a totally authoritarian alternate universe ruled by the Nazis. They're a collection of individuals who have canonically fought and beaten the Nazis before on Earth-X, so really, the Arrow-Verse folks couldn't be in better hands.

In the very beginning of the crossover, Dark Archer beats down a man holding a star-spangled shield, seemingly defeating him. That may have been Uncle Sam, the leader of the Freedom Fighters in the comics, who has a pretty interesting backstory. He was created in an arcane ritual by the Founding Fathers that led to the concept of American freedom to become a sentient being and superhero with superhuman strength, agility, and perhaps most importantly in this crossover, the power to go between dimensions. This ability could be very handy in helping our heroes get back home after they're trapped on Earth-X in a disturbingly realistic concentration camp.

While the power of American Idealism (seriously, a form of divine inspiration is a part of Uncle Sam's comic power set) probably won't be enough to rescue the heroes, perhaps the rest of the Freedom Fighters will chip in and help defeat Dark Archer the way they've overthrown the Nazi regime in the comics before. The other members of the team typically include Black Condor, Doll Man, Human Bomb, Phantom Lady, The Ray, and Firebrand.

Introduced in Justice League of America Issue 107, the team dates back to 1973, in an issue that shares the name of the crossover event, "Crisis On Earth-X." Since the crossover events run relatively parallel to that issue, the borrowed title is apt. In the book, the Justice League and Justice Society are trapped on Earth-X and are rescued by the Freedom Fighters, uniting all of the teams to truly defeat the alt-universe Nazi soldiers. In this version of the story, there is no Dark Archer or Overgirl orchestrating the events; that's a twist created for the TV event. Eventually, the Justice teams and the Freedom Fighters return to Earth-1 as victors. Later, the "Crisis On Infinite Earths" storyline killed off several members of the Freedom Fighters.

The second night of the "Crisis On Earth-X" TV crossover will introduce Ray "The Ray" Terrill (Russell Tovey), who will subsequently be spun off into an animated series for CW Seed called Freedom Fighters: The Ray. According to executive producer Marc Guggenheim's interview with TV Insider, the animated version of the openly gay hero will also battle the "dark" versions of the Earth-1 heroes and champion justice and freedom for all marginalized people. Guggenheim also cited the "Multiversity" comic storyline for inspiring the new interpretations of this light-wielding character. He said:

“It’s called Freedom Fighters: The Ray for a very specific reason, which is we knew we wanted to establish the Freedom Fighters and Earth-X. In Multiversity, Grant Morrison came up with an idea we really responded to: The Freedom Fighters are made up of various minorities targeted by Nazis — women, gay men, Jews. We wanted to honor that idea. At the same time, it’s an origin story about the Earth-1 iteration of The Ray.”

So the big crossover is only the beginning for The Ray and the Freedom Fighters in the larger CW/DC universe. They'll be showing oppressors who's boss in animated form, once they help their new Earth-1 friends save their world.