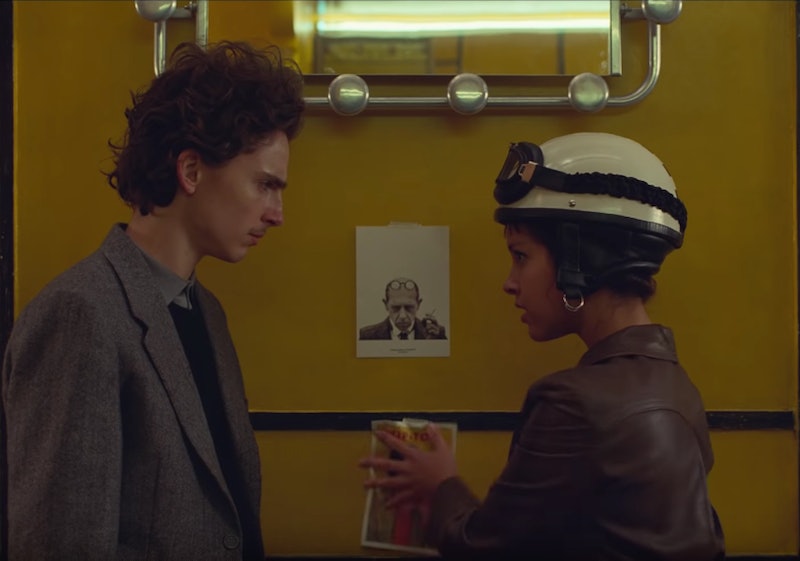 Jo March and Laurie shippers, your time is now. Wes Anderson's French Dispatch trailer brings Timothée Chalamet and Saorise Ronan together again, though based on the clip, it's hard to tell how many scenes the two will actually share, if any. After working together in 2017's Lady Bird and then again in 2019's Little Women, both helmed by Greta Gerwig, Chalamet and Ronan are back at it. This time around, it's director Wes Anderson behind the camera, and they're far from the only stars in his highly anticipated new film.

The French Dispatch stars Bill Murray as the editor-in-chief of a literary magazine, or as star Tilda Swinton describes it in her narration, "a factual weekly report on the subjects of politics, the arts — high and low — and diverse stories of human interest.” The trailer teases a few stories that the Dispatch is working on, including one about an eccentric artist and the increased demand for his work, and a piece on the young protestors who took part in the Paris riots of May 1968 (that's where Chalamet and his full head of hair come in).

Unfortunately, while Chalamet plays one of the young protestors, Ronan appears to be in a separate story entirely, involving the kidnapping of a chef.

True to form, Twitter users have been sharing their excitement for the film all day, marveling at the director's whimsical aesthetics and collectively agreeing that this may just be the most Wes Anderson movie that Wes Anderson has ever made.

But of course, people are mostly excited to see how Chalamet and Ronan are going to blow their minds this time.

The French Dispatch is set to be released in theaters on July 24, but if you can't wait until then for your Chalamet/Ronan fix, prepare to watch Lady Bird and Little Women over and over again. No, there's no such thing as watching them too many times.