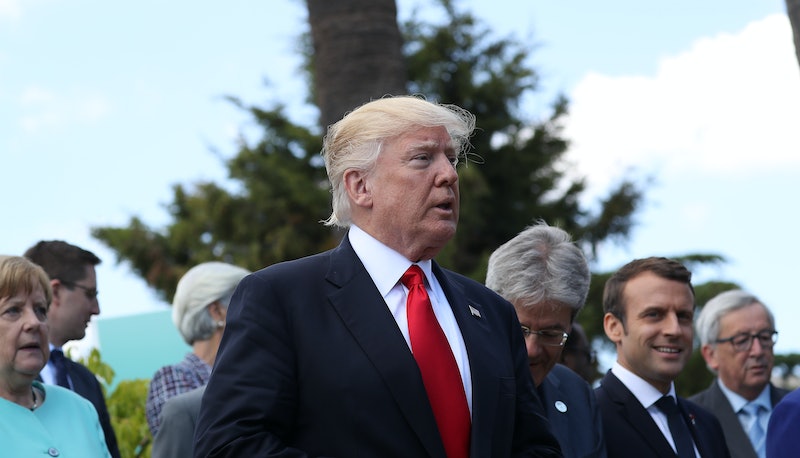 After President Trump announced that he will withdraw the United States from the Paris climate accord, the White House released a video defending Trump's decision and outlining the arguments for exiting the accord. Not long thereafter, the French government trolled Trump's Paris climate accord video, modifying the text to explain why the United States really should have stayed in the agreement.

"The Paris accord is a bad deal for America," reads the opening text of the original video. The French version, which was posted by the French Ministry for Europe and Foreign Affairs, displays this text as well, but then adds some faux-handwritten scrawls around it, so that it reads "Leaving the Paris accords is a bad deal for America and the world." And it goes on from there.

Where the Trump video claims that the deal "undermines U.S. competitiveness and jobs," the French edit scrawls a line of question marks next to that statement, and adds that "many major U.S. companies from all sectors, such as Exxon Mobil, Schneider Electric or Microsoft, disagree." While the White House says that "President Obama committed $3 billion to the green climate fund without authorization from Congress," the French version provides additional context to this, noting that $3 billion is "less per capita than many other countries [contribution to the fund], including Germany, France, the UK, and Sweden."

The French edit makes some good points. It also fits well into the ongoing feud between Trump and new French President Emmanuel Macron, a feud that Macron is winning handily.

It began when the two met at a NATO summit in Brussels in May. As he often does when meeting world leaders, Trump attempted to dominate Macron by way of an overly aggressive handshake, but Macron was prepared: After a tense couple of moments, Trump relaxes his hand in an attempt to end the handshake, but Macron doesn't, leaving the U.S. president's limp hand resting impotently in the French leader's grip. Later, Macron pointedly ignored Trump while approaching a group of European heads of state, dodging the U.S. president in order to hug German Chancellor Angela Merkel instead.

Macron later said that his handshake with Trump was "not innocent," adding that he doesn't believe in "diplomacy by public abuse."

“That’s how you ensure you are respected," Macron told French media. "You have to show you won’t make small concessions — not even symbolic ones.” The Washington Post later reported that Trump was "irritated and bewildered" to hear "smack-talk from the Frenchman 31 years his junior."

To be sure, it wasn't Macron himself who posted that edit of the White House video. He kept things much more simple, tweeting an image that read "MAKE OUR PLANET GREAT AGAIN."

The opposition to Trump's withdraw from the accord isn't confined to Europe. After the president made the announcement Thursday, a coalition of U.S. mayors and governors pledged to follow the terms of the Paris agreement regardless of the federal government's stance on the issue.