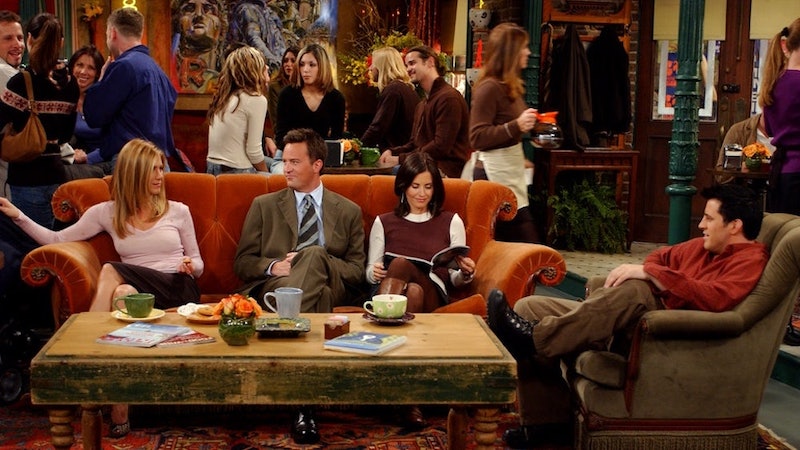 If you're a '90s kid that already feels old in a world taken over by Gen Z, get ready to feel completely ancient. September 2019 will mark 25 years since the first episode of Friends aired on television. But luckily, instead of mourning the golden era of Friends, fans can celebrate it. A Friends 25th anniversary pop-up is opening in New York City this fall to celebrate, meaning that fans will be able to live out their deepest Friends fantasies in real life — yes, this includes hanging out on the couch at Central Perk.

To celebrate the milestone anniversary of the legendary show, Superfly and Warner Bros. are teaming up to create an immersive pop-up experience which will run from Sept. 7 to Oct. 6, as reported by E! News. Of course, the pop-up will be located in New York City, where the show was set, because any other locale would just be downright inappropriate. And the space just might bring tears of nostalgia to your eyes.

The pop-up experience will let fans enter the world of Rachel, Monica, Phoebe, Chandler, Ross, and Joey for themselves. Each character will have a separate space dedicated to them, according to E!, complete with props and costumes from the show, and there will be a re-creation of the gang's hangout spot, Central Perk. I can smell the coffee already.

Fans will also be able to stick a turkey on their heads (hopefully a fake one), pose on Chandler and Joey's recliners, look through Monica and Rachel's iconic purple door, and learn some of Monica's most useful cleaning tips, among other fun things. From the looks of the layout shared by E! News, fans can even re-create the Friends opening sequence and pose at the fountain. And of course, the pop-up will also have a retail store for all of your Friends merch needs, because no good experience is complete without a stop at the gift shop.

"It's been nearly 25 years since Friends premiered, but the fascination and universal appeal of the hit TV series lives on with fans of all ages," Peter van Roden, senior vice president of global themed entertainment for Warner Bros. Consumer Products, said in a statement about the pop-up, as reported by E!. "As we celebrate the show's milestone anniversary, we are excited to bring the Friends experience to life for our fans in a way that pays homage to the remarkable cast of characters, iconic sets and instantly quotable moments."

Tickets for the pop-up will go on sale Friday, August 2, at 10a.m. EST, and will be priced at $29.50 per person. Given the popularity of the show, they just might sell out quick, so set your alarms now. And maybe play "Smelly Cat" in celebration of this momentous occasion.