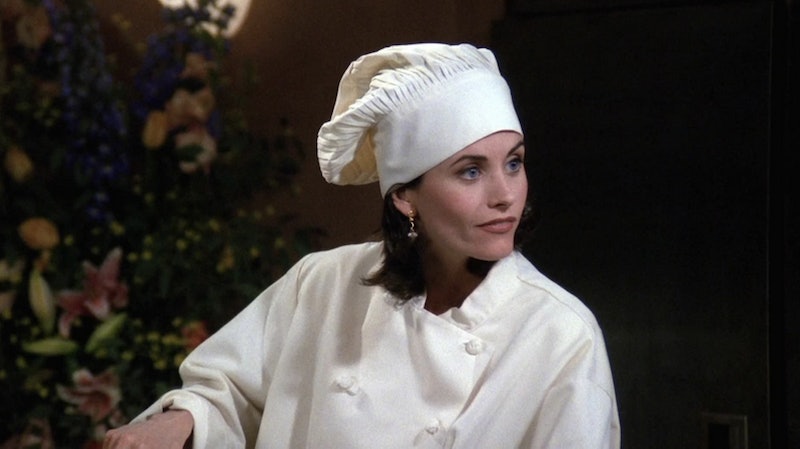 Friends has gone down as one of the most beloved shows of all time, and some longtime fans immediately knew the magic of the show from the very first episode. So they might be surprised to learn that the very first episode, "The One Where Monica Gets A Roommate," was almost very different. According to Friends co-creator David Crane, Monica's date was almost cut from the Friends pilot — for the most ridiculous reason.

Crane revealed to Entertainment Weekly that NBC was concerned about the fact that Monica Gellar (Courtney Cox) goes out with Paul the wine guy and sleeps with him on the first date. “When we were doing the pilot, Don Meyer, who was then the head of NBC, took real issue with the fact that Monica sleeps with a guy on the first date," Crane claimed. "He said, ‘We’re not going to like her!’ But we really held our ground on it.”

As EW pointed out, this was back in 1994, when women even talking about sex wasn't all that common on TV, let alone women having sex. Today, it seems unlikely that a TV network would have any problems with a female character sleeping with someone on the first date, and if they did, they'd likely face the wrath of social media. Still, according to Crane, at the time NBC was concerned that the audience wouldn't approve of Monica's one-night stand, and decided to put their theory to the test.

Director James Burrows planned to have a live audience for the network run-through of the pilot “so you can hear what’s working," according to Crane, and NBC used it to get feedback on the storyline. But their questions to the audience weren't exactly subtle. “The network gave the audience a questionnaire that was so skewed,” Crane said. “It basically said: ‘When she does this, is she a trollop? Is she a slut?'”

This type of questioning is obviously sex-shaming and wrong on many levels, and, most notably, probably would not have been asked if the character having said dalliance were Ross, Chandler, or Joey. (At least, not in such explicit terms.) However, the audience had the opposite reaction, and didn't let Monica's choice affect their perception of her. “The audience all came back with, ‘No, we still like her,'” Crane said.

Per EW, former NBC exec Meyer also finally agreed to air the storyline, even though he justified it with a much less pleasant reason: he liked that Monica ended up getting tricked by Paul's claim that he hadn't had sex in two years, which turns out to be a line he's used on multiple women. “Then Don got on board because he said, ‘Well I’m okay with it because she gets what she deserves when the guy sort of screws her over'," Crane remembered. Understandably, this was a comment that Crane's co-worker Marta Kauffman took some offense to. "I could see the steam coming out of [co-creator] Marta’s nose," he said. "And I’m tap-dancing going, ‘But you’re okay with it! So if you’re okay with it then we’re good, let’s move on, yay!'”

Of course, as fans knows, the entire story made the pilot, as it should have, and audiences embraced Monica and her sex life. The rest, as they say, is history.