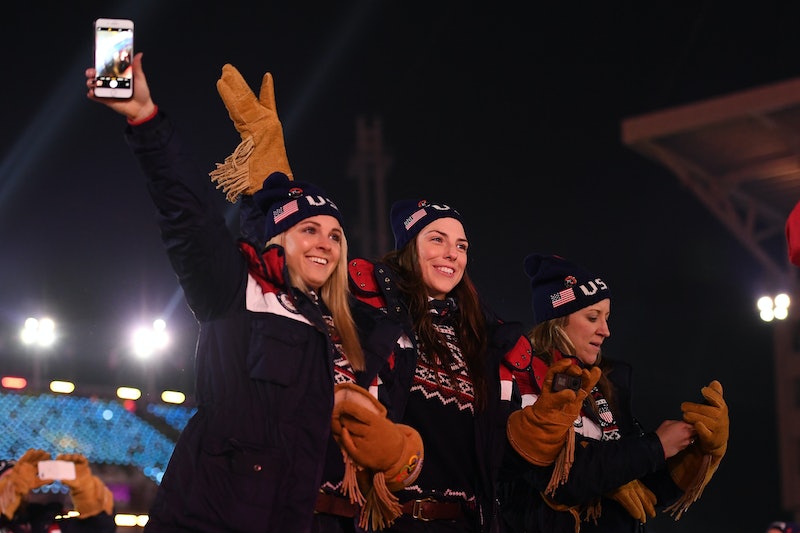 Let the games begin! The 2018 Winter Olympics are currently taking place in PyeongChang, South Korea. The internet is extremely vocal about the performance of the athletes during the intense games. The web is also quite opinionated about the uniforms the aforementioned competitors wear. Team USA's 2018 Opening Ceremony outfits were created by classic American sportswear designer Ralph Lauren. They feature camel-colored, suede-look, cowboy-inspired gloves complete with fringe. They are undeniably extra.

The Twitterverse is abuzz about this accessory, expressing itself summarily and as expected.

Upon being introduced at the Parade of Nations on Feb. 9, Team USA was rocking red, white, and blue parkas, blue knit caps, wooly sweaters, brown mountain boots with red laces, and those gloves.

The gloves are oversized, thick, and extend past the wrist. The color is a basic, bland neutral. Overall, the gloves have quite a utilitarian aesthetic — they're essentially work gloves. They look like something you'd wear when chopping wood and need to protect the sensitive skin of your hands from getting blisters. One Twitter user even likened them to what a falconer wears.

If you are left wondering what purpose they serve other than to provide warmth, you are not alone. The Internet considers them to be a curious choice, as well.

If these gigantic gloves were white, they'd be akin to Mickey Mouse hands!

In addition to the Olympic logo and the American flag, the Wild West-inspired gloves also had fringe. Fringe is certainly a trend with handbags and vest. It has found its way into Team USA's Olympic unis. Because why not?

Twitter was not having any of the gloves. These are the best reactions thus far.

This user's assessment of the gloves is astute.

Falconry should be an Olympic sport.

Twitter certainly noticed the gloves were more functional than fashionable. The question remains — which function?

The Doctor Strange mentions were plentiful.

Not everyone was hatin' on the gloves. This user appreciated the look.

LOLZ! This user is reintroducing "swaggy," aka Justin Bieber's favorite word, into the vernacular.

The shape of the Team USA gloves is similar to the rubber gloves you sport when cleaning the dishes or the kitchen.

Twitter has questions. The brown gloves didn't really match the largely dark blue ensembles. Perhaps that was the point. Team USA certainly stood out because of them...

Ouch! But Liz's question is a valid one. But the answer is Ralph Lauren. This is his sixth tenure as the designer of Team USA's uniforms, according to Yahoo.

OMG! Extra gloves that are so... extra.

In case you didn't get the Dumb and Dumber reference, watch the clip above.

The gloves were not without supporters.

Some fans were feeling them because they were such an unusual choice.

But for the most part, Team USA's gloves generated many questions.

Twitter certainly didn't hold back its feelings regarding these mittens.

Nailed it! Will "construction worker chic" be the next trend designers send down the runways? It's entirely possible.

All of the feels. Every. Last. One.

The verdict is in. Team USA's fringed gloves are gloriously extra.

At least she's having fun with the fringe while avoiding frostbite.

The clothes at the Olympics are obviously — and always— a hot topic. Even if you aren't too concerned with which countries are racking up the most medals or which sportspersons are breaking world records, you can still tune in to check out the uniforms. The fashion element of The Olympics increases the thrill of tuning in and soaking up all the games have to offer.