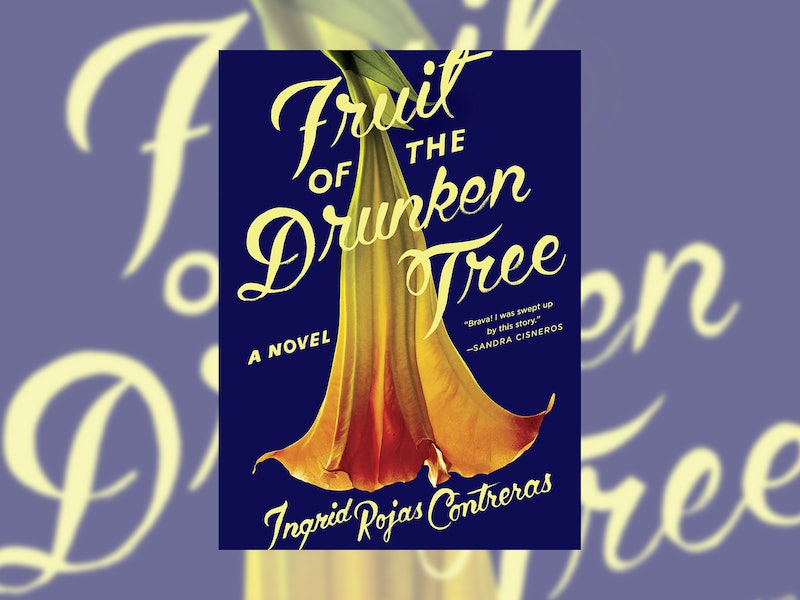 In her debut novel, Fruit of the Drunken Tree, author Ingrid Rojas Contreras transports readers to Colombia in the late '80s and '90s, a period marked by extreme violence and political turmoil. A power struggle between the government, paramilitary groups, crime syndicates, and guerrilla movements made daily violence a sad reality of the lives of Colombians. In Contreras's novel, two young girls from very different classes develop a deep bond during this time of rampant bombings, assassinations, and kidnappings. First, there's Chula, whose family lives in a gated community in Bogotá; then, there's Petrona, who hails in the slums but works for Chula's family as a live-in maid. Like her main characters, Contreras grew up in Colombia during this period of incendiary and terrifying violence, and the book was inspired by her own personal experiences in many ways.

"There's something about taking a real story or something that's inspired by real life and putting it in the territory of fiction, because suddenly you have so much more power to explore your own emotions, what it was like emotionally to be there in Colombia, not only through what you lived, but through the lives of others," Contreras tells Bustle. "Of course when you are a child there are things that you can only scratch the surface of, especially if they're political in nature, and one of the joys of writing this novel was that I was able to both see in the shoes of a child and as an adult."

Politics and the civil conflict play a critical role in this story. Chula's eyes are opened to the dangers outside her gated community when she first witnesses bombings and killings. Meanwhile, Petrona is struck by tragedy when her younger brother is recruited by a guerrilla group. As the story progresses and tensions rise, Petrona soon finds herself in an impossible position — she is caught between her loyalty to Chula's family and the loyalty demanded by the guerillas.

"Whenever I read things of Colombia in the newspapers, the story is always simplified, and of course it has to be simplified so that we can understand the situation. And living through it and talking to people who were in desperate situations in Colombia, what struck me was that there is no such thing as a pure villain, and there is no such thing as someone who is pure evil," says Contreras. "It's always what's interested me the most about Colombia, this aspect of the personal folding into the political in a kind of snake that bites its own tail, and it becomes very complicated...So, in The Fruit of the Drunken Tree, I wanted a story where there wasn't a clear map of what was right and what was wrong, there are only choices, and none of them seem to be the right choice."

The infamous drug kingpin and narco-terrorist, Pablo Escobar, played a huge role in Colombian politics and culture at the time in which this book takes place. Known as "The King of Cocaine," Escobar commissioned and executed countless acts of extreme violence in his fight to gain political power. Chula views Escobar as a mythic figure, and she lives in constant fear of what he is going to do next. Though readers are never introduced to Escobar directly, his influence upon the novel is so large that Contreras thought of him as another character.

Fruit of the Drunken Tree by Ingrid Rojas Contreras, $20.80, Amazon

"If you grew up in Colombia at the time, [Escobar] was definitely a character in your life. Every Colombian was just so invested in every bit of news that came out about him," says Contreras. "When he was finally killed, two things happened...either, depending on what class you belonged to, you were very excited that he passed away, or you were absolutely devastated."

"If you grew up in Colombia at the time, [Escobar] was definitely a character in your life."

She adds, "The other thing that happened was that, to us, we felt that he was so untouchable and so much just larger than life that we couldn't believe that he was dead. In the book I talk about people thinking that there has to be a body double, people say that maybe they saw him in Germany — those were all things that were really happening. And that was the atmosphere. That was how large he was to us: he couldn't be shot, he couldn't die."

You cannot separate this book, nor its author, from the Colombia in which it is set. But the novel is about more than violence and politics — it's about two girls who form a deep, emotional, and life-changing bond and grow up while surrounded by death: "They're purely curious about each other," says Contreras. "Younger people tend to be wonderful in this way, where the judgements about where someone comes from, where they live always tend to be not present yet, when you're that young. And, they just meet each other in this place of curiosity and this openness and tenderness, and their friendship grows from that."

But Chula and Petrona's friendship isn't the only female bond that shines in this novel. Chula also has a strong relationship with her larger-than-life mother and co-conspirator older sister. As Petrona grows closer to their family, she slowly finds a place within their tight-knit circle.

"Colombia at the time, and even now, is a country that's steeped in machismo... But growing up there, I was so lucky to be surrounded by very strong women, whose power was limited of course by the systemic sexism of the country. But because of that I think they were even more fierce and even more aggressive about carving their own space and carving their own path, and defending their rights," says Contreras. "I wanted to honor what it was like to be under the wing of strong women in your family who are trying to teach you how to be a strong woman in a country that is not interested in you having that kind of role and having that kind of power."

The Fruit of the Drunken Tree takes its title from an extremely poisonous tree colloquially named "el Borrachero" ("the drunk"). Chula's mother plants this tree in front of their house, and Contreras sees the tree as an overarching metaphor for Colombia. "It's so lush, and it's so wild, and it's so beautiful," she says. "But there's a danger that lies underneath."