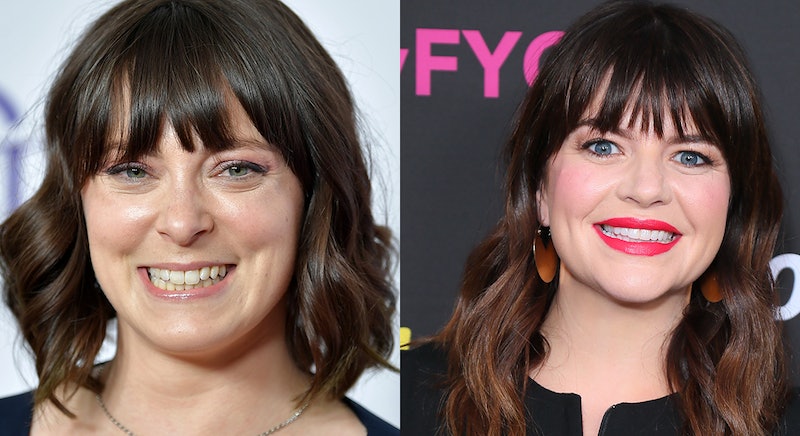 The romantic comedy has seemingly made a comeback, if the recent success of To All The Boys I've Loved Before, Always Be My Maybe, Crazy Rich Asians, and other films are anything to go by. The plucky genre was celebrated at the inaugural Rom Com Fest in Los Angeles in late June, with plenty of famous fans. Ahead of hosting screenings at the festival, Rachel Bloom and Casey Wilson reflected on the future of the rom-com and what part they hope to play in it.

Both Bloom and Wilson have made noted contributions to the genre. Bloom's CW series Crazy Ex-Girlfriend subverted many rom-com tropes, while also showing love for the genre throughout its four-season run, which concluded in April. Wilson has starred in the romantic comedy TV series Happy Endings on ABC and NBC's Marry Me; she currently plays Tiffany Georgina on Showtime's Black Monday and had a small, memorable role in Netflix's Always Be My Maybe, talking about Gubi chairs with Ali Wong.

At the festival, Bloom curated a screening of her own all-time favorite rom-com, Never Been Kissed, and Wilson co-hosted a screening of the 2009 comedy Bride Wars with June Diane Raphael; the comedy duo co-wrote the screenplay, about two female friends (Anne Hathaway and Kate Hudson) who turn into rivals while planning their respective weddings.

Though interviewed separately, Bloom and Wilson both point to Always Be My Maybe, the Wong and Randall Park Netflix rom-com, as an example of the representation that they hope to see more of in the genre. "I think [we need] more rom-coms with types of people falling in love that we haven’t seen yet: trans, non-binary, certainly LGBT in general, because it’s new stories," Bloom tells Bustle before stepping on stage to introduce Never Been Kissed. Always Be My Maybe, she goes onto say, is successful and fresh because it introduces cultures we hadn't seen explored or represented in the classic rom-com structure before.

Wilson also points out that the genre has already expanded in its scope, even venturing to dark places. For instance, she considers Phoebe Waller-Bridge's BBC/Amazon comedy series Fleabag "the darkest romantic comedy of all time." The show follows Waller-Bridge's title character as she processes grief, sex, her family, religion, and more, sharing stories about love of all kinds in a unique, witty voice.

"For me, the perfect rom-com [now] is just from a different point of view than we’ve seen," Wilson tells Bustle over the phone. "The romantic comedy is just telling a great story that we all want to see of a couple coming together, and it’s just fun. And I think it’s time to just see different voices telling those stories that we love."

With all the possibilities of the genre in mind, we asked Bloom and Wilson to cast their own dream rom-coms. Bloom says that hers would be about "a drag queen who falls in love" potentially starring Monét X Change from RuPaul's Drag Race and Queer Eye's fashion expert Tan France. As for Wilson, she wants to cast Melissa McCarthy and Regina Hall in a lesbian love story — their friends would be played by Waller-Bridge, and Pen15's Maya Erskine. The Bride Wars screenwriter even selects the hypothetical movie's antagonist: a mean boss played by comedian John Early, who stars in TBS' Search Party. "I don’t know if it will go anywhere, but I’m ready to jump in on it," Wilson says. Studios, are you listening?

The future is wide open for the newly revived genre, so who knows? Bloom and Wilson may see these ideas — or others like them — come to theaters someday.