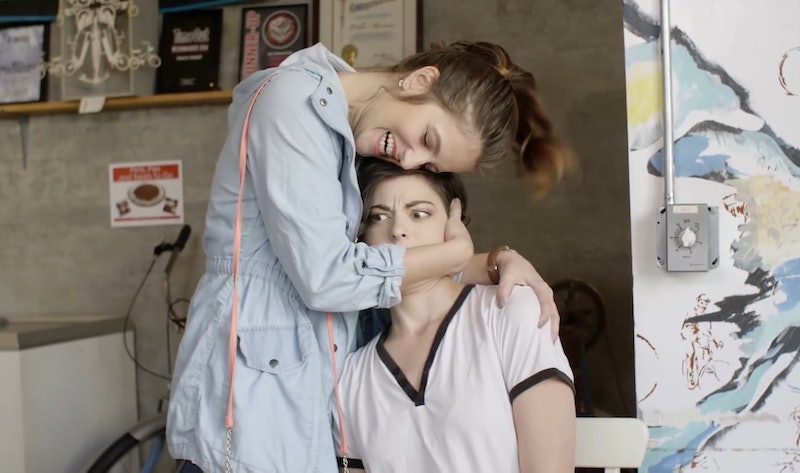 Female friendships and relationships can be uplifting, supportive, confusing, and dramatic, all at the same time — and the web series Gal Pals perfectly encapsulates that chaos in a unique way. The comedy focuses on a group of women in Los Angeles navigating both romantic and platonic relationships with other women, and it's already receiving critical acclaim — Gal Pals is up for award consideration at Stareable Fest within the event's short form comedy selections.

The entirety of Gal Pals Season 1 is already available on YouTube, with Season 2 coming on June 20. There are eight installments in the inaugural season, all around 5 to 8 minutes long, making it a quick watch, but one that's well worth the time you do spend. The very first episode of the series features the character of Bee (Katie Lynn Stoddard) catfishing straight women into dates by pretending to be a Jeff Goldblum-type on a dating app (using an actual photo of Jeff Goldblum — who wouldn't swipe right?) and then inviting them to join her at her table when Jeff ultimately fails to show up.

"Look, everybody thinks Jeff Goldblum is attractive," she says. "Gay, straight, Apple, Android — doesn't matter." She eventually lands a pseudo-date with a woman using this method, proving her skeptical roommate wrong. It's a ridiculous and absurd plotline, but one that feels lighthearted and genuine.

There's a wealth of material that Gal Pals could tackle into its second season, especially since each episode is just a few minutes long. As Season 1 goes on, Bee attempts (with questionable success) to woo Dylan (Anna Wyatt), one of her Jeff Goldblum Tinder targets, as she tries to gauge if Dylan would ever be into women or not. She and her roommate Olivia (Skarlett Redd) are a delightful duo, and the rest of the supporting cast is just as solid, so if Gal Pals continues on its current trajectory, Season 2 already seems promising, even before its premiere.

The show's often hilariously too real portrayals of romance and dating in this modern age have apparently struck a chord, and fans are obviously excited for the return of the show. Though Gal Pals might not have exactly hit the mainstream just yet, the series' channel does have more than 27 thousand subscribers on YouTube, and there's also been some buzz on social media about the web series' return.

Gal Pals is just one of the web projects that'll be featured at Stareable Fest, and you can take part in the festivities if you're able to snag tickets and be in New York City late next month. The event is set to be held from July 20–22, 2018 at Town Stages in Tribeca, and tickets are available online.

Stareable is a community of web series creators working to push worthwhile independent web content (like Gal Pals) to a bigger audience. And though the weekend-long event does include awards and screenings, it's really "half industry marketplace, creating face-to-face connections between independent filmmakers and decision makers at major platforms, and half creator convention, with workshops and panels about how to be a more effective filmmaker," according to the official site.

In addition to the projects that'll be screening at Stareable Fest, there are also a few panels focusing on not just content creation, but also other super important topics like the under-representation of women, the LGBTQIA+ community, and people of color in media. With projects like Gal Pals and conversations like these, the fest is primed to pave the way for more diverse and interesting entertainment.

Disclosure: Bustle is a sponsor of Stareable Fest, which takes place in New York City on July 20-22, 2018.