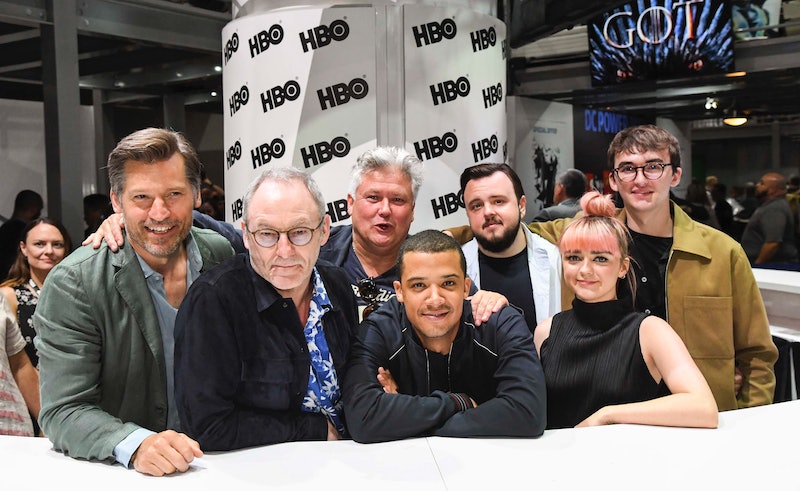 Photo by Jeff Kravitz/FilmMagic for HBO

According to Winter Is Coming's live tweets, the panel began with a sizzle reel including clips of scenes from the show's eight-season run. At one point, there was even a reference to the famous coffee cup that was accidentally left in a Season 8 scene (and later removed by HBO). Entertainment Weekly's James Hibberd then asked each of the actors for updates on their characters: Williams said Arya was probably channeling her inner Dora The Explorer, and Anderson predicted that Grey Worm started a new society in Naath. When Coster-Waldau said Jaime's death "made sense to me," EW's liveblog noted that the crowd groaned, which can be heard in a video posted by Variety's Twitter account. This led to the cast members addressing the backlash to Season 8 and they unequivocally show their support.

Hill has been noted by fans for voicing his frustration about the show's later seasons, but he supported how Game of Thrones ended while at the panel. “It was picked over like a whale on the beach," he said. "I loved all my 10 years on Game of Thrones…It was a life-changing experience ... We were never divisive as a cast. We never fought amongst each other. This is the reality rather than a media-led hate campaign.” He later added that he thought Varys had a "cool death."

Coster-Waldau brought up the widely-circulated petition to "remake Game Of Thrones Season 8 with competent writers," which was signed by over 1.5 million people. “The absurdity of the online petition," he said, according to EW's liveblog. He continued:

"Like HBO was going to change the whole thing. That’s the power of HBO! Every season we had controversies: Ned Stark’s death. The Red Wedding. I feel so lucky to have met so many people and so many fans of this show; it has brought so many people together. If you come to an end, it’s going to piss you off no matter what, and, of course, at end of day, it’s absolutely fine If you hated the ending, if you loved it, that’s great — just don’t call people names.”

During the panel, Coster-Waldau also voiced his support for Jaime and Brienne, a duo that only consummated their love before he died in King's Landing with his twin sister, Cersei. Earlier in the day, he shared a series of Instagram stories showing how excited he was for the panel. "When I was here the first time, eight seasons ago, it was when I realized that the show was probably going to stay on the air for a while," he said in the IG stories. "We're here basically to say thank you to all the fans that come here and to say thank you to all of you for following our show."

He shared another IG story a few minutes before the panel began, featuring Wright and Cunningham.

Game Of Thrones' final SDCC appearance was announced in June, but at the time, there were a few more notable names in the panel line-up, including Nathalie Emmanuel (Missandei), Iain Glen (Ser Jorah), and showrunners David Benioff and D.B. Weiss. It would have been Benioff and Weiss' first public appearance since the controversial and divisive eighth season of the HBO series aired.

But then on July 17, the official GoT Twitter announced that Benioff and Weiss would no longer be a part of the SDCC panel. Fans speculated that the writing duo, who will next tackle the Star Wars franchise, declined to attend due to the backlash against the final season. According to Variety, HBO stated that Benioff's and Weiss' absences are due to "production and schedule conflicts," but had "no further comment."

Since Game Of Thrones' series finale aired in May, the HBO series has been nominated for a record-breaking 32 Emmys this year, which included acting nominations for Emilia Clarke (Queen Daenerys), Coster-Waldau, Williams, Gwendoline Christine (Ser Brienne of Tarth), Sophie Turner (Sansa Stark), Alfie Allen (Theon Greyjoy), Lena Headey (Cersei Lannister), and Peter Dinklage (Tyrion Lannister). In total, the show has been nominated for 160 Emmys throughout its eight-season run, according to the Academy of Television Arts & Sciences.

So fans may actually see their favorite Westerosi back together one last time — on the Emmys stage in September.