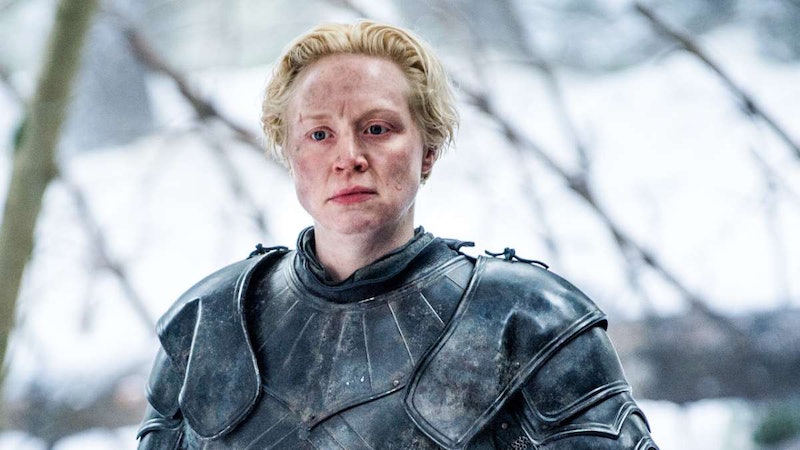 Buckle up Game Of Thrones fans: Brienne of Tarth says the last season of the HBO fantasy series could do a number on your mental health. Talking to E! News, Gwendoline Christie said that the Game of Thrones final season might send fans straight to a therapist's office — her exact words: “you’re going to need therapy.” And if fans don’t need some psychoanalysis, the cast certainly will, because the actors are having a hard time saying goodbye to Westeros.

At the Welcome To Marwen premiere on Tuesday, Dec. 11, Erin Lim from E! News tried to get any morsel of a spoiler she could from Christie, who simply said: “You’re going to need therapy.” Does that mean people will be dying? Unfortunately, Christie is a solid HBO employee and kept mum, but she did add this: “I just think the show ending is going to send all of the world into professional help.”

And while she had nothing to say in the way of spoilers, Christie admitted that personally for her and her castmates, wrapping the series has taken its toll. "I think it's going to make me incredibly emotional," she said. "We're all emotional about the fact that this is the end, and this is the end of something incredibly significant for all of us, and it's been a truly incredible thing to be a part of."

Christie isn’t the only one feeling wistful. Peter Dinklage, who plays the series’ breakout character Tyrion Lannister, told Vulture in October that his last day of filming as Tyrion was bittersweet, and saying goodbye to the other actors was even tougher, especially the younger cast. "I won’t say their name or their character’s name, but one of the young people on the show wrapped this past season and everybody was a wreck," Dinklage said. "This person had grown up on the show, you know? They were a child and now they were an adult. And then they’re done. It’s like we were witnessing this person saying good-bye to their childhood. I know Game of Thrones is just a TV show, la-di-da, but it was our life." The show first premiered in 2011.

As for Tyrion’s fate? Dinklage told Vulture, "I think he was given a very good conclusion. No matter what that is — death can be a great way out.” Obviously that’s not to say that Tyrion dies for certain; it’s just a perfectly diplomatic answer.

As far as Brienne of Tarth’s ending, Christie might not be able to give any answers, but she doesn't mind being asked. At the Welcome to Marwen premiere, she revealed that her co-star in the movie Janelle Monae is a huge GoT fan, and the singer even tried to get info from her. "People are always incredibly respectful," Christie said. "They know it's your job to protect the secrets of the series, so nobody ever really tries to catch you out."

It looks like fans really will just have to wait until the April premiere of Game of Thrones Season 8 to find out what becomes of Brienne of Tarth.