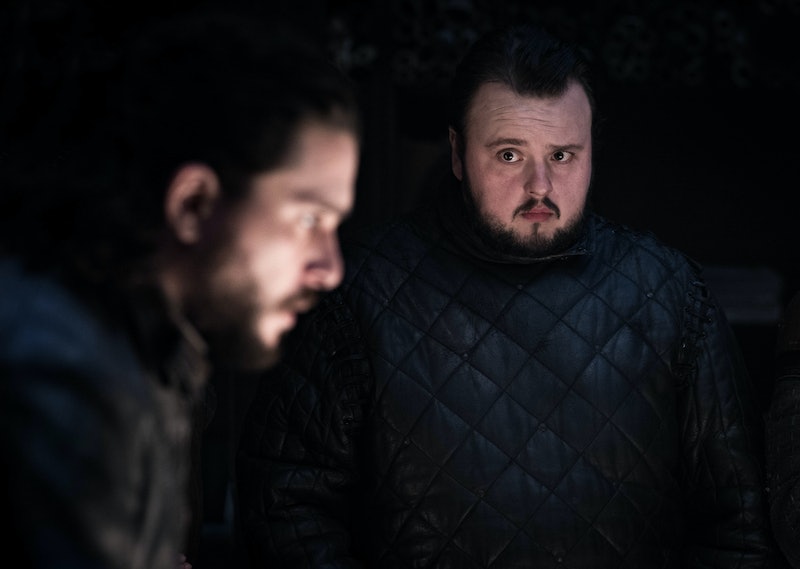 Learning from your mistakes is a part of life, but it looks like the production team behind GoT didn't get that memo for the final season. If you're still reeling from #CoffeeCupGate from 'The Last Of The Starks', be prepared for a whole new dose of memes because a water bottle was spotted on Game Of Thrones after several observant fans spotted it peaking out beside Samwell Tarly's foot during the final episode of the series last night. (Don't worry, there aren't any spoilers for the final episode).

During a scene where he and a bunch of other characters were sat on chairs, if you look very closely at Tarly's boot, you can see a plastic water bottle. It's not as glaringly obvious as the coffee cup since you'd more than likely be looking at the actors faces rather than their feet, but once you clock the bottle, it's hard to unsee it.

Another user also pointed out that not only was there one by Tarly, but there was a second water bottle in shot next to Ser Davos's boot as well. Yikes.

HBO has yet to acknowledge the mistake like they did with #CoffeeCupGate in where a coffee cup could be seen in front of Daenerys during 'The Last Of The Starks' when it first aired on May 5. HBO has since removed the cup from the episode, so if you've been on the look-out during re-runs of the episode, you won't see it. As Variety reports, "[a] rep for HBO confirmed the coffee cup was deleted and that future airings of the episode, 'The Last of the Starks', would be of the updated version." While there's no word as of yet that HBO will do the same for this episode, it wouldn't surprise me if they had something as witty up their sleeves as they did did with #CoffeeCupGate.

While it's a little concerning that two mistakes like this have occurred in pretty close proximity to one another, but it's actually more common than you might think. In an interview with The Guardian earlier this month, on-set dresser Rodney Sterbenz (he's worked on the likes of Boardwalk Empire and Unbreakable Kimmy Schmidt) explained how that although "this list of people who probably should have caught this is long," those who watch the scene before it's aired are "just not looking for it".

Video editor Nina Hospedales also explained to the publication that she "wasn't surprised by it" either. "As an editor, I try to get my content out against a deadline so I think it's pretty easy to miss little details," she said. "I've done it before and I'm sure every editor has at some point. I'm also sure that very few producers watch the episodes since they don't want leaks."

When it comes to the actual screening, and a mistake is noticed, Hospedales noted that "[a]t that point, you just one hope no one notices." Well if they do, as has been with Game of Thrones, at least the technology is available to remove the mistake for re-runs, streaming, and home media.