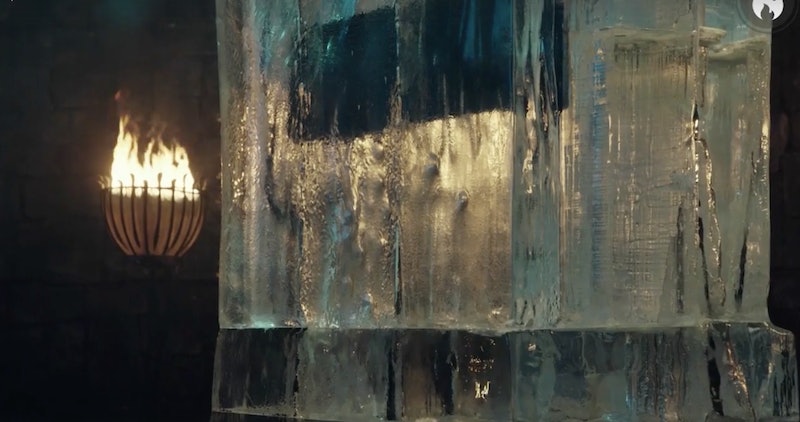 Game of Thrones on Facebook
By Jordana Lipsitz
March 9, 2017

Shortly after 2 p.m. things got... interesting. The live video showed a giant block of ice with some sort of metal plate frozen inside sitting on a dais surrounded by the sort of lanterns Daenerys Targaryen used to kill the roomful of Khals. Fans were prompted to type "FIRE" in the comments, so someone off screen with what looked like a flamethrower could torch the ice block, revealing the date. Unsurprisingly, torching a giant ice block takes a zillion and a half years, so fans sat for 10 minutes, staring at this slow-melting (perhaps slower than other large blocks of ice) icy cube. Meanwhile, cast members like Bran Stark actor Isaac Hempstead Wright urged fans to comment "fire" as a means of melting the ice.

And then the video abruptly ended, leaving fans bewildered and wondering when they'd get that beloved premiere date. The video has continued to flicker on and off throughout its live stream.

While we were all losing our minds — and the video was finally coming back — some fans had the best reactions.

1. The One That Referenced Technical Difficulties

2. The One That Accepted Their Game of Thrones Obsession

Hey, we're all in the same boat. No judgments here.

3. The One That Called HBO Out As Trolls

Seriously, maybe they should officially rename the series.

4. The One That Couldn't Deal

None of us have any chill about this and that's OK.

5. The One With Some Side-Eye

6. The One Who Acknowledged There Was No Turning Back

At least we're all in this together, right?

7. The One Who Decided To Just Start Watching The Series Again

Maybe we should all stop staring at this block of ice and join in a good ole-fashioned rewatch.

8. The One Who Kept It Short And Sweet

9. The One Still Trying To Keep Cool

Embrace the world of no chill, friend. There's thousands of us with you.

10. The One Who Admitted They'd Rather Watch Ice Melt Than Be In Class

11. The One That Threw Shade At The Freys

12. The One That Called For Wildfire

If only 'twere a true substance.

13. The One That Recommended Rehearsals

It's always nice when GoT teaches the life lessons.

14. The One With An On-Point Jon Snow Gif

Always a pleasure to see you, Mr. Snow.

Wow. I think I need to jerk my eyes away from Facebook and watch a quick cat video after that assessment of humanity.

16. The One That Was Still Hopeful

17. The One Who Actually Liked It

Guys, "genial" means "awesome" in French. Are watching the same thing as this person?