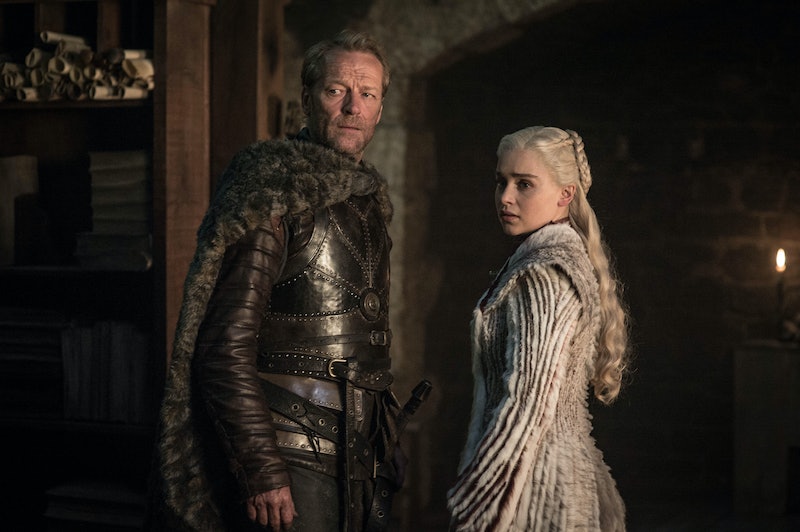 For all the changes that have come to Westeros during Game Of Thrones' eight seasons, the opening credits sequence has stayed the same, showcasing different setting from an overhead view. The Season 8 Game Of Thrones opening credits, however, show just how far the series has come by completely changing how fans are supposed to view the fictional world.

The Game Of Thrones opening sequence has always been fluid, showcasing primarily what locations will be relevant to a particular episode. While there are some mainstays — there has never been a GoT intro without Winterfell, King's Landing, and The Wall represented — the intro sequence had the flexibility to show off locations that required shorter visits, such as Pentos, The Twins, or Eastwatch when it saw fit. Eagle-eyed fans were able to predict who or what location where important depending on the credits.

The Game of Thrones Season 8 intro, however, is shortened its scope and heavily featured the show's three most important locations by presenting them in an entirely new light. Where the camera of the familiar Game of Thrones opening sequence used to fly over the show's various settings, the new credits sequence features new visuals that provide audience with a close-up look at the machinations of the crafty board that has led audiences into the world of Game Of Thrones for eight seasons.

The new etchings suggest that the story of Game of Thrones doesn't care much for royal houses anymore and is more concerned with who will survive against an army of the dead. As the camera moves south, it goes through the gap left in The Wall at the end of Season 7 and sweeping by Last Hearth, the seat of House Umber, which doesn't get a very in-depth sequence (likely because it's the seat of House Umber) before flying into the depths of Winterfell.

The new interior looks of the opening also extend to King's Landing, which explores the streets of the city before diving down a spiral staircase of the Red Keep and visiting the room where Cersei and Qyburn previously tested their Dragon-Killing super crossbow before coming to the Iron Throne, with the Lannister sigil hanging above it. By the end of the series, it's entirely possible that that lion could change to a Dragon, a Wolf, or anything that isn't a Rose (R.I.P. House Tyrell.)

It's far too soon to tell whether these changes will be consistent, or if Game of Thrones is planning to do deep interior dives into some of the series' most famous locations before the show comes to a close. Perhaps fans will be treated to a vision of the camera going through the Moon Door if the opening sequence has reason to visit The Eyrie, or a more detailed look at Dragonstone or Pyke, some of the few minor locations that are still relevant in late-GoT.

The show's final season is likely to bring a lot of changes to Westeros, and the season used its opening moments to prove that the series still has plenty of tricks up its sleeves.