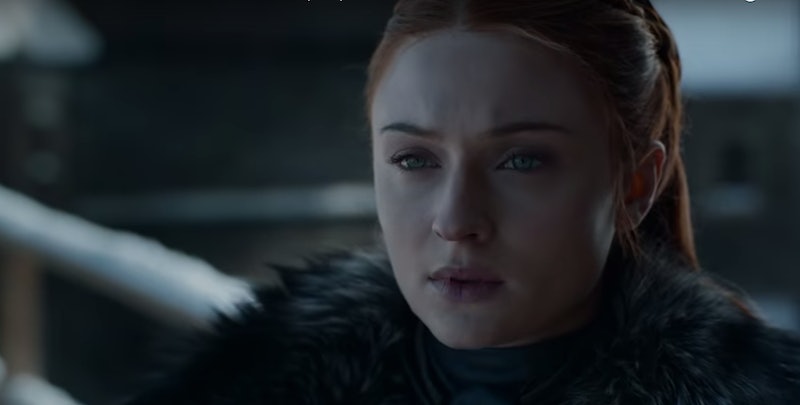 The moment you've all been waiting for is finally here. The official, full-length Game of Thrones Season 8 trailer has now dropped and it's just as epic and you wanted it to be. Not only does it show the return of all your favorite characters, most of whom are sharing screen time for the first time in a very long time, but it also shows the dead finally arriving at Winterfell and it's enough to make chills run up and down your spine.

The war for the Iron Throne has been the focal point of pretty much every season, but if the Season 8 trailer tells us anything it's that the Iron Throne is being put on the back burner for now (well, for everyone except Cersei that is) because there's a new villain to take care of first if anyone hopes to have any chance of sitting on any throne in the near future. The war they're all preparing for isn't just for some silly crown — it's for humanity itself. Westeros is in more danger than it has ever been before and the severity of the situation can be felt all throughout the two-minute clip. War and winter aren't just coming: they're officially here.

Considering that there's a lot to unpack in this new footage, let's break down some of the most noteworthy moments to help get a better sense of what we know so far.

Arya Is Running From Something... Or Someone

It's hard to picture the youngest Stark sibling of being scared of anything these days, so what is it that's making her flee in such terror? Most likely it's the same thing (or person) that caused that nasty wound on her forehead.

She's Also Adding A New Face To Her Collection

As the scene shows Arya running down dark corridors, her voiceover says: "I know death. He's got many faces. I look forward to seeing this one." Cut to Arya pointing a dagger at someone. Could this be the person that she's running away away from? She doesn't have a bloody forehead yet, so this could be how it comes to happen.

It was pretty much known already that these guys survived the devastating collapse of The Wall, but it's good to have actual video proof of this nonetheless.

Could Sam & Bran Be Telling Jon The Truth About His Heritage?

"Everything you did brought you where you are now, where you belong: home," Bran is shown telling someone while Sam hesitantly looks on. It's unclear who Bran is speaking to at the time, but his words indicate that it could be Jon. Is this the moment he finds out who his parents really were? It's difficult to say from just this short interaction alone, but it's definitely possible.

Dany & Jon Arrive Together To Winterfell

But while it's good they are able to make it safely back, tensions are bound to be high now that the Mother of Dragons is in their midst.

Sansa Gets Her First Look At Dragons

Is that shock in her eyes or just plain terror?

The Crypt Makes Another Appearance

Earlier this year, HBO released a GoT teaser that featured Jon, Sansa, and Arya walking through the Stark family crypt before coming face-to-face with their own statues, which seemed to indicate that their deaths could be on the horizon. (Stark members only receive a statue in the crypt once they're dead.) The crypt is also where Lyanna Stark is buried, so Jon's visit down there in the trailer could signify yet again him learning the truth about his lineage once and for all.

Gendry Is Gearing Up For Battle

And hopefully reuniting with Arya in the process. Please?

Seriously here for this love story, which probably means one (if not both) of them are going to die by season's end because Game of Thrones fans can't have nice things.

“I promised to fight for the living, I intend to keep that promise," he says in the trailer. Looks like this Lannister is doing a lot more than paying his debts these days. Honor is a good look on him.

Cersei Is Hanging Out At The Red Keep

And drinking wine because, obviously.

Her expression is all of us right now watching this trailer.

Jon May Get To Actually Ride A Dragon

It's impossible to say this with absolute certainty, but both Jon and Dany are shown approaching Drogon and Rhaegal out in the middle of nowhere. Are they about to mount them and ride off together? It definitely seems that way.

Being the queen's hand is tiring work indeed, especially when the dead are on their way.

Whether they're soaring through the wintery landscape of Winterfell or breathing fire at enemies, these guys are the true stars of the show — and will hopefully be able to save these characters from a terrible fate.

A Glimpse Of The Forthcoming Battle

The battle of Winterfell is said to be the biggest fight scene in Game of Thrones history, which means countless lives are sure to be lost. Hence why it's so worrying to see Podrick and Brienne of Tarth on the front lines.

The Dead Have Arrived

And life in Westeros will never be the same.

Needless to say, April 14 can not get here soon enough.

More like this
'The Sandman’s Ending Is A Departure From Neil Gaiman’s Comic Book Series
By Kadin Burnett
The 'PLL: Original Sin' Creators Say A’s Identity Will Be “Very Clear” By The Season Finale
By Alyssa Lapid
Everything To Know About 'Evil' Season 4
By Meguire Hennes
Gabby & Rachel Reveal How That 'Bachelorette' Rose Ceremony Twist Happened
By Grace Wehniainen
Get Even More From Bustle — Sign Up For The Newsletter