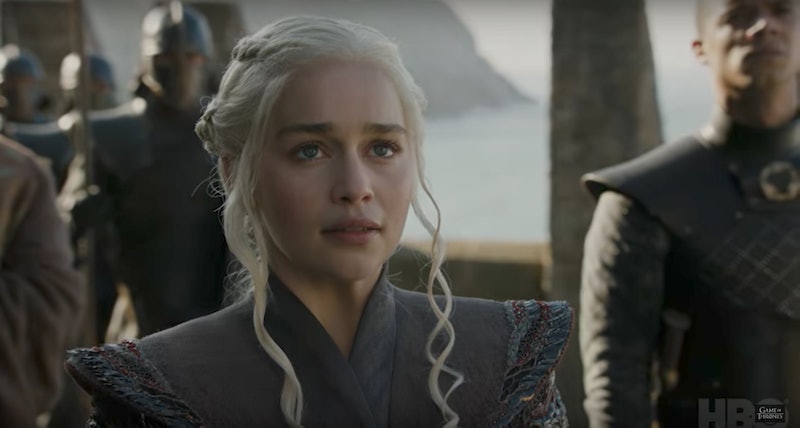 Things aren't looking any more peaceful for the inhabitants of Westeros. In a new trailer for Season 7, the Great War is about to break out; while White Walkers descend from the North, the battle for the Iron Throne will continue in the Seven Kingdoms. Amidst the chaos, the Game of Thrones trailer puts its female leaders front and center. Cersei Lannister is seen settling in to defend the throne, which, for now, she has won. Daenerys Targaryen prepares troops, complete with dragons, to seize the kingdoms. Arya Stark is seen traveling alone in the North. It's clear that no matter what suspenseful turns the new season brings, its female characters will be at the center of the action.

As the new trailer opens, all eyes and ears are on Cersei. At the end of Season 6, the ruthless queen scorched her enemies at King's Landing, accidentally driving her last son to suicide, but securing her position on the iron throne. The queen has desired this spot since the beginning of the series, and now, since it came at the cost of her children's lives, she's unlikely to give it up without a brutal fight. Her voiceover in the trailer shuts down any doubt of this fact. "Enemies to the east, enemies to the west, enemies to the south, enemies to the north; whatever stands in our way, we will defeat it," she says, likely to Jamie Lannister, her last ally.

However, Cersei isn't the only leader ready for a fight. Daenerys is back as well, and as far as armies go, hers looks pretty formidable. The Mother of Dragons raised her creatures well, because they're now, well, completely gigantic. She also has Tyrion Lannister, the spy Varys, Theon of Greyjoy, and the Queen of Thorns on board just for good measure. Did we mention the dragons? There are three of them, they're huge, and they breathe fire. It's clear that Daenerys is positioned to lead some of the final season's most dramatic moments.

It isn't just these embattled women who take center-stage in this new clip. Arya Stark is given plenty of screen time, wearing new fur-clad armor. There have been major rumors that the whole Stark clan will reunite in the new season, making it the first time in five years Arya, Sansa, Jon Snow, and Bran would be together. This trailer also all but confirms the suspicion that Arya would become a fighter of the North. When Cersei assesses the threat at all sides, we see a clip of the Arya atop a horse, looking not-at-all pleased. If the House of Stark is going to band together one last time and try and reclaim what's been taken from them, they are likely to rest their hope on Arya, who has become independent and resourceful in the past seasons.

War is imminent in Westeros. While Game of Thrones has always given viewers complex, powerful female characters, it's clear that they will lead the upcoming battles. These kick-butt women have always been one of the biggest draws of the show, and it's only right that one of the most dramatic, fast-paced seasons center around their stories. It's looking like it might be destruction for the Seven Kingdoms and beyond, but before the White Walkers doom everyone, there's sure to be a spectacular, battle-ridden, dragon-filled, contentious, women-centric season.