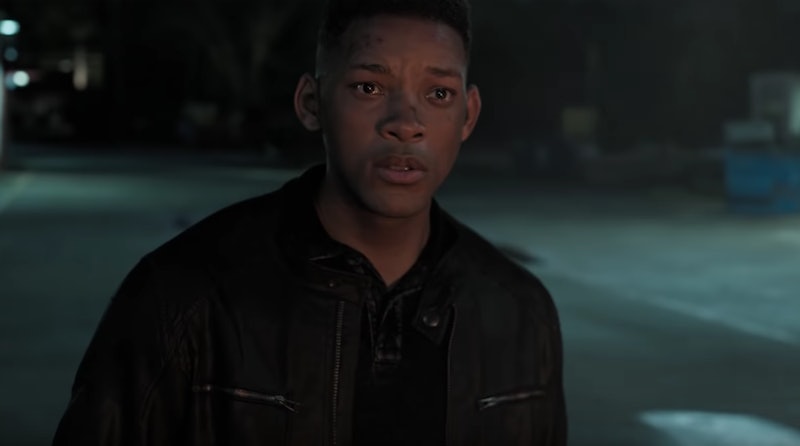 Could you kill a clone of yourself? That's probably not something you have ever considered before, but once you see the new trailer for Will Smith's Gemini Man, you might just consider that hypothetical question for the first time. On Tuesday morning the first trailer for Gemini Man came out, and it won't just meld your mind because it pits two Will Smiths against each other, but also because the upcoming Ang Lee film uses de-aging technology that makes one of the Will Smith characters look much younger than the other. One is the Will Smith of 2019, the other looks like the Will Smith of 1990. The film showcasing the time-melded twin assassins is set to come out on Oct. 11, but fans can enjoy the mind-blowing Will Smith vs. Will Smith tease right now.

The first images of Smith's two characters in Gemini Man debuted earlier in April at CinemaCon, to which Smith sent in an audio recording to introduce the film, per Variety. "I’m 50 years old now, and I don’t know that I would have had the experience to play a 23-year-old me [earlier in my career]," the actor said. It's certainly true that Gemini Man seems way more intense, both physically and mentally, than the kind thing that Smith was filming when he actually was 23, namely The Fresh Prince of Bel-Air.

In the new trailer, it really looks like the doe-eyed Fresh Prince is back, as the mind-blowing technology seems to have turned back time.

In a press statement for Gemini Man, director Lee commented on the digital de-aging, saying, "Thanks to incredible new digital technology, not only can we finally see both younger and older Will Smith embodied together on screen, but we can also experience the story in a deeply immersive way," per Entertainment Weekly. Smith added that the "physical challenges of making this film have been the most demanding of my career." Carrying a whole film by playing two different people can't be easy, especially in an action movie like Gemini Man. That said, it's also becoming a bit of a trend at the moment, what with the recent success of Jordan Peele's Us and the future use of digital de-aging technology.

Lee's October film isn't necessarily a horror movie like Us, but the younger version of Smith still might inspire some level of existential dread. Many of Smith's fans reacted to the upcoming movie's trailer on Tuesday, oftentimes remarking upon how wild it is to see current Will Smith face off against younger Will Smith.

As The Wrap pointed out, Gemini Man is just one among numerous movies using the digital technology that can return an actor's appearance to an earlier visage. Marvel used the technology for Captain Marvel to make Samuel L. Jackson look like his younger self while playing Nick Fury, and Robert De Niro, Al Pacino, Joe Pesci, and other actors will appear as younger characters thanks to de-aging effects in the first half of Martin Scorsese's The Irishman. None of these other movies actually put the two versions of the actors together in fight scenes, though, so you can bet that Gemini Man will be totally un-matched.