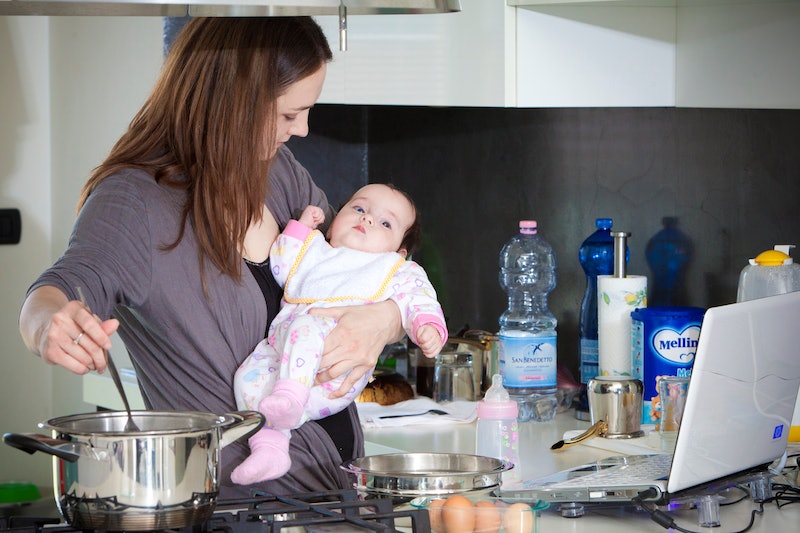 Workplaces around the world have a lot of room for improvement when it comes to ensuring working moms and dads are compensated equally. Based on a National Bureau of Economic Research study published in January 2018, the gender pay gap for first-time moms is especially devastating. And according to NBC, the study suggests this drop in their earnings never catches up.

This particular economic paper was written by researchers Henrik Kleven, Jakob Egholt Søgaard, and Camille Landais, who based their findings on Danish administrative data from 1980 to 2013. The trio's research on first-time working mothers noted that their income falls by 30% and doesn't completely recover after that.

In particular, the authors of the study noted that, financially speaking, things had only gotten worse for working moms. "The fraction of gender inequality caused by child penalties has increased dramatically over time, from about 40% in 1980 to about 80% in 2013," they wrote.

In contrast, there seems to be a so-called "fatherhood bonus," according to the United Kingdom trade union group known as Trades Union Congress. Its 2016 study noted, "Contrary to the situation for mothers, fathers working full-time at the age of 42 receive a raw wage 'bonus', earning 22% more on average than non-fathers in full-time work." For working mothers, Kleven, Søgaard, and Landais' study noted that inequality in earnings between moms and dads created "a gender gap in earnings of around 20% in the long run."

In America, researchers have argued that working mothers aren't paid on an equal level with their male counterparts. According to a 2018 study conducted by the nonprofit advocacy group National Women's Law Center, working mothers are paid 71 cents for every dollar working fathers earn. The wage gap for these working moms ultimately results in a loss of $16,000 wages on an annual basis, according to the organization.

Sociologists and economists have long pointed to the inequality working mothers face in their professions. Under such a "motherhood penalty," the researchers for Bright Horizons, a childcare provider group, wrote that "working moms are often perceived to be less committed or less competent than other employees." Such a perception ultimately affected a "woman's hiring and promotion potential," according to the research. The study also noted that 72% of both working mothers and fathers believed that working moms faced economic setbacks after they started their own families while working dads did not.

The gender gap for working married women who don't have children may not be much better. A separate study by the Institute of Labor Economics noted in April that married women in their 30s who didn't have children still seemed to lose job opportunities and promotions. This was apparently based on hiring bias that these women might have kids later on.

As the Trade Union Congress noted in its 2016 study, the motherhood penalty not only hurts working moms' chance to professionally thrive, it also weakens the labor market. The paper noted that workplaces with transparency and equanimity were both fairer to working moms and improved a nation's economy.

More like this
This Is When Netflix Is Going To Start Charging You For Sharing Passwords
By Darshita Goyal
Twitter Has *A Lot* To Say About The "Single Penalty”
By Sam Ramsden
Watch Jacinda Arden’s Devastatingly Honest Resignation Speech
By Sam Ramsden
Adam Levine & Behati Prinsloo Welcome Their Third Child Together
By Jake Viswanath
Get Even More From Bustle — Sign Up For The Newsletter
From hair trends to relationship advice, our daily newsletter has everything you need to sound like a person who’s on TikTok, even if you aren’t.