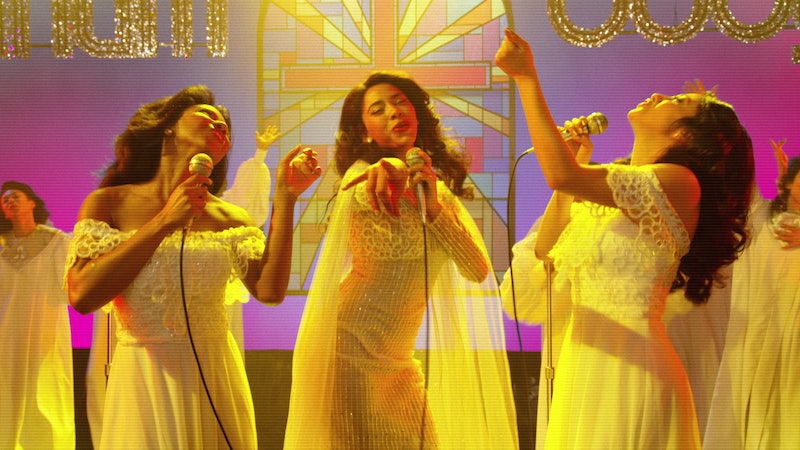 The Get Down Brothers are back again in Baz Luhrmann’s Netflix creation, and the music is going to be a serious game changer. The Get Down Part 2 is now streaming, and a lot of the hype around its release was about the musical numbers. But the soundtrack of Part 2 promises to be one of the better adjustments made between the two halves of The Get Down. It blends music from the ‘70s with artists of today, updating classic tunes with a modern spin. I won't deny that Part 1's soundtrack was bumping with its mix of classic artists and modern ones, but Part 2 promises to up the ante. The Get Down Part 2 soundtrack will be released April 21, so get ready to stream the songs all day every day.

Artists featured this time around range from Donna Summer to John Legend to Sia, who has collaborated with Luhrmann since the beginning of The Get Down creative process. "If you look at the music, we’ve got all of the classics, both dead and alive," Luhrmann tells press at the show's premiere. “But we also have new works, some surprising, new, very famous artists," he says.

Luhrmann’s no-rules approach ensures that the The Get Down does more than just tell the story of hip hop. The soundtrack adds to the madness, producing something entirely new. "I didn’t want it to be like a photocopy [of the time period]," Luhrmann says. "The idea is that some of the [songs] are very close, and then some of them are not. Some of them are saying, 'That was hip hop then, now here’s hip hop now. That was disco then, here’s disco now.' So quite often, we’re drawing the line between those two points." Luhrmann has always adapted his pieces to make them feel modern, like when he had Beyoncé sing in The Great Gatsby or Christina Aguilera do a cover in Moulin Rouge!

Somehow, having both The Jackson 5 and DJ Cassidy on one album totally works and reinvents this story from the past. Nelson George, supervising producer of the show, tells Bustle that even though "everything's built on a foundation of truth," they also let their imaginations take over in the process. "The way the music is used, no one have ever done it before, the mix of hip hop and disco," George says. "It’s not a documentary, it’s a Baz Luhrmann extravaganza."

"September" by Earth, Wind & Fire might seem expected on a soundtrack for The Get Down, but a single by Alessia Cara definitely isn't. Hidden gems like Sam Dew and Dillon Cooper are also featured on the album. The show’s music lives up to the hype, filled with catchy songs you won't be able to get out of your head.

Stefanée Martin, who plays Yolanda, says that the music is what makes The Get Down so special, because it's what connects to the audience the most. "There's something about music that when you don't have the words to say or when you're in a certain kind of mood, music speaks for you and says the perfect thing or gets you out of that mood," Martin tells Bustle.

The soundtrack’s approach allows the audience to relate to people in the ‘70s who were just hearing this kind of music for the first time, according to Luhrmann. “I want you to understand by using new music how sexy, exciting, popular, and youthful that music was when they first heard James Brown,” Luhrmann says. “So rather than being a museum piece, it’s both the best of the museum and the best of now.”

The cast followed Luhrmann's lead by drawing inspiration from the classics of the '70s. Martin says that most of the women in the cast looked to Donna Summer for inspiration. "But for me, for Yolanda, who really got her spirit was Damita Joe Jackson, who was one of the main dancers on Soul Train," she tells Bustle.

From the characters to the clothing to the soundtrack, The Get Down is one giant mash-up of present and past with the addition of dramatic flair. It’s Baz Luhrmann’s world and you're all just living in it.

More like this
An Ultimate Guide To The Music Of 'Rap Sh!t'
By Brad Witter
Everything To Know About The HBO Max & Discovery+ Streaming Service Merger
By Brad Witter
Here’s When 'She-Hulk' Takes Place In The MCU
By Brad Witter
'Better Call Saul’s Co-Creator Explained Jimmy & Kim’s “Happy Ending” In The Finale
By Brad Witter
Get Even More From Bustle — Sign Up For The Newsletter