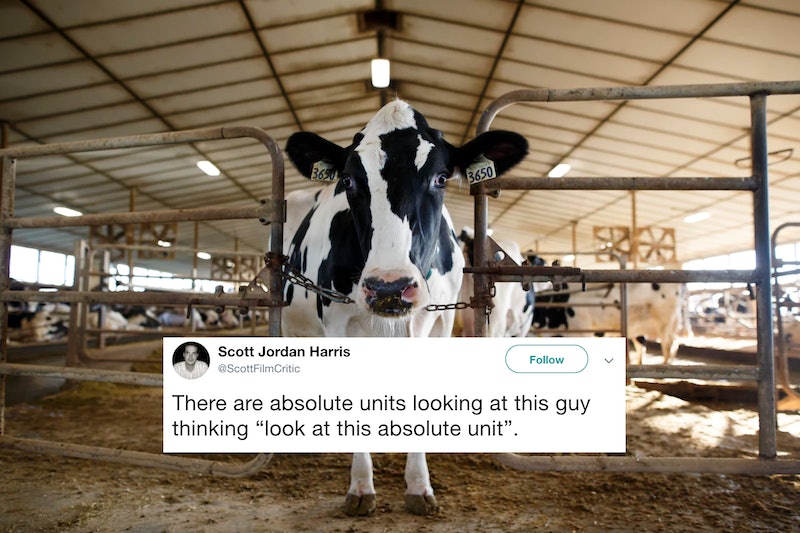 The year is coming to an end, as is our sanity and patience with 2018. The internet seeks distraction, and so, the internet has fallen in love with a big cow named Knickers if for no reason other than he is literally too big to be slaughtered. Big cow is a big, big mood.

Let’s start with some context. According to one cattle industry website, the average adult cow weighs about 1,500 pounds and stands at 58 inches tall. Knickers, of course, is not average. He’s big.

Knickers, the seven-year-old bovine, is 75.5 inches tall. (For scale, Dwayne “The Rock” Johnson is 6’5”.) Our big, big cow—yes, he is all our responsibility now—weighs 1.4 tons or 3,086 pounds. (For scale, Dwayne “The Rock” Johnson weighs about 260 pounds, according to some quick Googling I just did right now.) So Knickers weighs, like, almost 12 Dwaynes. Basically, he’s big and that’s all the internet needed to know to be like, “We love it! We’re obsessed! Give us more big cow!!!”

According to the Mirror, Knickers’ owner Geoff Pearson tried to sell him at an auction last month (rude). However, meat processors said they wouldn’t be able to take him because he’s too big for their machines. (JUSTICE!!!)

If we’re being technical (which we’re not...we’re just trying to talk about a large cow), Knickers isn’t technically a cow. As The Verge points out, our beloved big cow is actually a Holstein Friesian steer: “Cows are female cattle who have had a calf; a steer is a neutered male.”

I am not a bovine scientist, but I say let Knickers! Be! A COW!!! Mostly just because “big cow” is more fun to say than “big steer.”

Knickers’ owner Geoff Pearson says he first bought the cow as a “coach,” which is a male cow that’s been castrated (AKA a steer) and used to leads other cattle. That’s right. Knickers has a job. We love a big, employed cow!

How did Knickers get his name? Pearson told BBC, “When he was young, when we first got him, we had a Brahman steer [a different breed of cattle] which was a friend of his.” (Knickers made friends! Big cow has friends!!!) “So his name was bra... so we [had] bra and knickers,” Pearson continued. “We never thought he would turn into a big knickers.”

Big cow is named after underwear. Just another reason why big cow is all of us.

Luckily for Knickers and the internet as well, the world’s favorite big, big cow has officially been saved from the slaughterhouse. Knickers is set to live out the rest of his days on a feedlot in Myalup, Australia, about 85 miles south of Perth.

Though Knickers is “Big Cow” he is not the biggest cow currently living. According to Guinness Book of World Records, the tallest living steer is a Chinaox named Bellino and lives in Rome. As of March 27, 2010 Bellino was 6ft 6.5inches tall, which is about two inches taller than Knickers.

Now, there’s only one thing left to do. If the internet can reunite two childhood friends who met on a dinner cruise in 2006, surely it can find a way to make the two big cows (I mean, steer, sorry) meet.