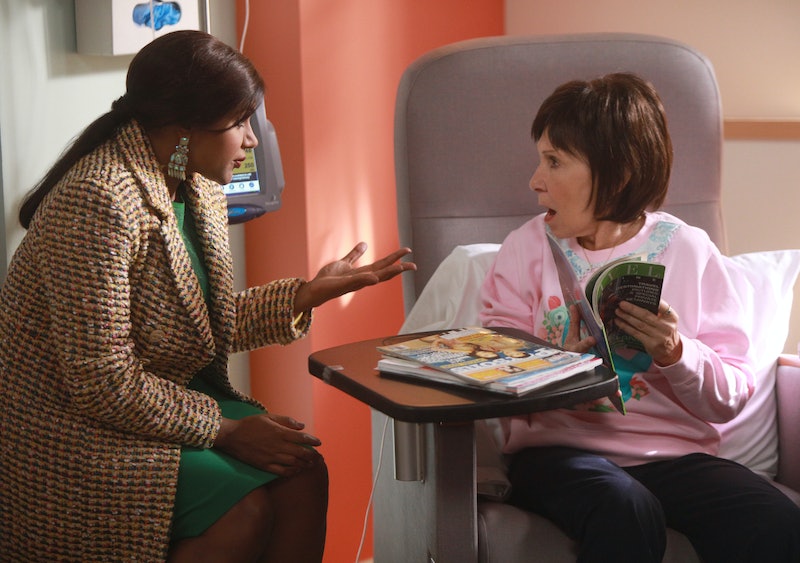 The Mindy Project is full of pop culture references, but, as a romantic comedy, the majority of references are from films. Thankfully, in the penultimate episode of the series, fans finally have proof that Mindy Lahiri loves Lorelai. The Mindy Project referenced Gilmore Girls in a way that reminds us fans why the show is important to us — while poking fun at it just a tiny bit.

While Danny's mom is undergoing chemotherapy, Mindy brings her Gilmore Girls Season 4 on DVD to marathon and take her mind off things a bit. Mindy describes the show as being full of "quirky white people," which is accurate. Compared to what Annette Castellano is going through, Stars Hollow is pretty care-free. It's the epitome of "white people problems" and can feel a little dated in terms of representation on television in 2017.

That said, Mindy and Annette happily discuss whether or not Rory will end up studying art history abroad and working on her water colors — which isn't an actual Season 4 plot. As cool as it would be to see Rory pull a full Amy March in Little Women, she's clearly more of a Jo. Also, in this fake plot, Emily is pro staying in Stars Hollow and taking a job bookkeeping, while Lorelei is urging Rory to go to Paris (the city, not the Liza Weil character), which would never ever be the case on Gilmore Girls. It's fine. Why hypercritize? It's totally fine. They are seen watching the real Season 4, though. In fact, the episode on screen in the hospital is "Ted Koppel's Big Night Out."

Later, Danny has the world's coldest and most expected take on the GG series. "I don't get this show," he says. "Why do they gotta talk so fast? Anytime anything happens, someone's got a little remark." Annette says it's just good writing. "You want good writing," he says, "I'll show you J.A.G. sometime." Sure Danny, OK.

The point is that Gilmore Girls is something that us fans reach to when we're sad, or stressed. It can be gut-punching and dramatic at times, but mostly it's a low stakes show that makes you feel good. It's just what Annette needed during chemo, and Mindy knows that. Danny wants everyone to focus on the cancer, but sometimes that just isn't healthy. Not all care is medical. Watching Gilmore Girls and getting caught up in a problematic fave is not avoiding a problem or taking it lightly, it's a valid coping mechanism.

Does this point towards Mindy and Danny getting back together? At the end of the episode, Danny not only admits that Mindy makes his mom feel better but that she has a good effect on him as well. He keeps coming over to her apartment unannounced. It's sweet, but the way the season has been going, doesn't necessarily say anything. There's still a chance that The Mindy Project will find a way to keep Danny and Mindy in one another's lives without a big splashy romantic reunion. But, since they have a child together, the show could be headed towards a more mature statement on loving relationships.

All that happened, in part, thanks to Lorelei and Rory. See all the good that Gilmore Girls can accomplish in this life? It's also astounding that nobody compared Danny to Luke Danes, not even once. They're practically the same character, and Danny and Mindy have basically the same banter-filled relationship. Of course Mindy Lahiri has Gilmore Girls on DVD. She totally sees herself as Lorelei. She probably assumes that her son Leo will grow up to be her best friend, just like Rory. With all of the nods to romantic movies on The Mindy Project, it's nice that Season 6 slipped in these references to a TV show for once. If only the episode had cleared up whether Mindy's Team Dean, Logan, or Jess? Probably Marty, let's be real.