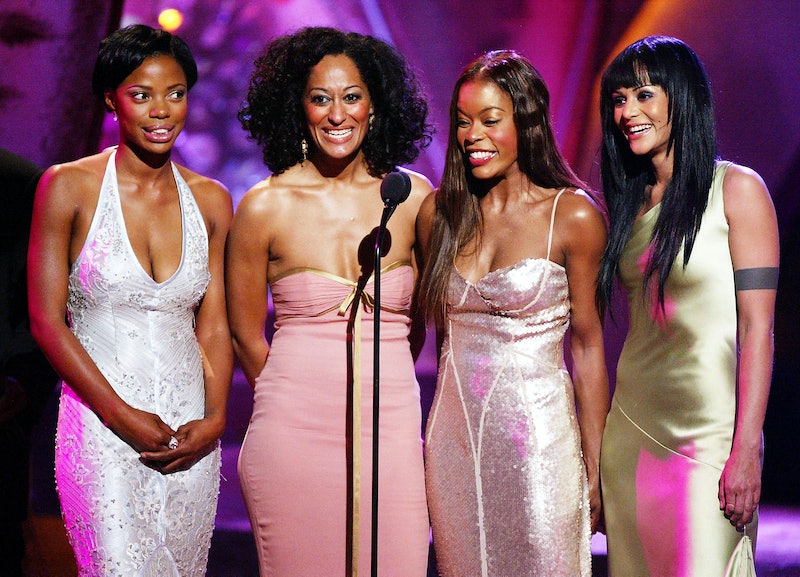 Tracee Ellis Ross is screaming with excitement, and she's not the only one. Of course, the actor has always made it known when she's very happy, and everyone loves her for it, but this time, she's yelling for a very special reason: she's reuniting with her Girlfriends. Eleven years after the end of the hit sitcom, the Girlfriends cast is reuniting on black-ish, Ross' current hit show, and she could not be more ecstatic about it.

On Thursday, Sept. 12, Ross posted a video to Instagram announcing the news alongside her Girlfriends co-stars, Persia White, Golden Brooks, and Jill Marie Jones. "So we have an extra special episode of black-ish," she hilariously told fans. "It's a feminist episode, so I brought in some back-up from some of my girlfriends," she said before panning the camera to her former co-stars as they started collectively freaking out. It's safe to say that their chemistry is still very strong.

"The timing was perfect to be able to bring Girlfriends to a whole new audience," Ross told Entertainment Weekly. "We haven’t all been together on camera since 2006. Girlfriends ran for eight years and was important to so many people. Being able to merge the worlds of black-ish and Girlfriends was surreal for me — and so much fun. These are women I grew up with and love deeply and it was easy to tap back into the magic of our chemistry and how much we love each other. It was giggles on top of giggles on top of giggles."

According to Entertainment Weekly, the Girlfriends reunion will happen during the Oct. 8 episode of black-ish, which has been called “Feminisn’t". The official synopsis reads:

“When Bow (Ross) learns that Diane (Marsai Martin) and Ruby (Jenifer Lewis) don’t believe in feminism, she brings Diane to meet the women in her feminist group. Bow’s friend Abby (guest star Nadia Quinn) thinks the group needs to be more inclusive, so Bow invites three of her girlfriends to join. Meanwhile, Junior (Marcus Scribner) and Jack (Miles Brown) help Dre (Anthony Anderson) after he realizes he is out of touch with modern day feminism.”

Girlfriends aired for eight years on UPN before the network became The CW. The show ended in 2008 after eight seasons, but as one of the only shows on television at the time that featured an African-American cast, it definitely left a mark on the television landscape. The success of the show even spawned a spin-off, The Game, which lasted for four seasons on The CW. So it's no wonder that fans immediately took to Twitter to celebrate the reunion news.

Although it took over a decade for a Girlfriends reunion to happen in some form, the four stars have been talking about it for much longer. Jones revealed in an interview with The Breakfast Club back in May 2018 that they all want to film a Girlfriends movie based off the show. "We all want to do it," she said, according to Shadow and Act. " I think it’s a timing thing and also the legal stuff. When you sell a script you don't actually own it anymore so whatever CBS and Paramount want to do."

Although it may not be the continuation of the classic series that fans may desperately want, seeing Ross and her girlfriends onscreen again on black-ish is sure to be completely heartwarming regardless.

More like this
The Banned 'Friends' Ad Shows Monica As You’ve Never Seen Her Before
By Sam Ramsden
'Friends' Star Maggie Wheeler Offers Support To Matthew Perry After Reading His Memoir
By Alyssa Lapid
'That '90s Show' Star Callie Haverda Got Advice From Mila Kunis & Ashton Kutcher
By Brad Witter
Mel B Thinks These Celebs Should Play Them In A Spice Girls Movie
By Alyssa Lapid
Get Even More From Bustle — Sign Up For The Newsletter
From hair trends to relationship advice, our daily newsletter has everything you need to sound like a person who’s on TikTok, even if you aren’t.