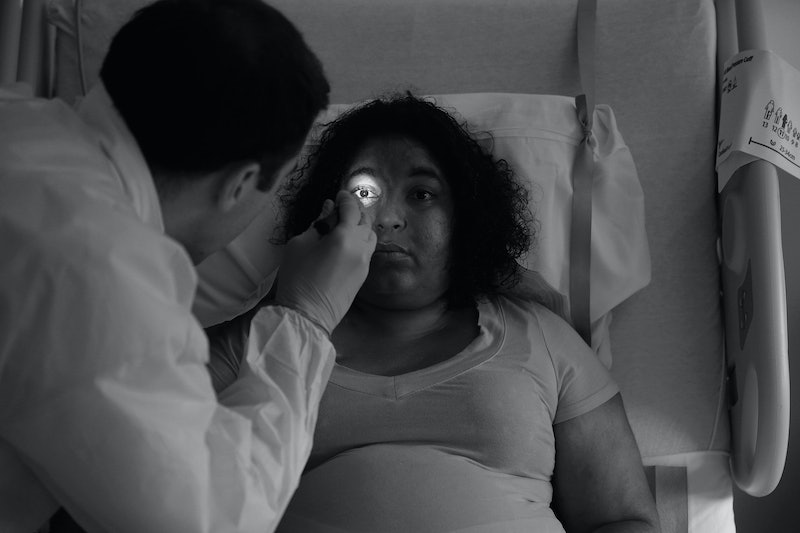 It seems obvious enough that sexism and discrimination don't belong in health care. And yet, here we are, watching Republicans in the House of Representatives push for health care legislation that, thanks to a slew of misogynistic policies, stands to have some serious repercussions for women. The House passed the Republican's amended American Health Care Act (AHCA) on Thursday. However, recent revisions to the bill have made the misogyny behind the AHCA more blatant than ever. In the recently added MacArthur Meadows Amendment, House Republicans define rape and postpartum depression as pre-existing conditions in a clear sign of their total disregard for women's health.

House Republicans have spent much of the week scrambling to shore up support for their recently revised AHCA after their first attempt to repeal and replace former President Barack Obama's Affordable Care Act (ACA) failed in March. But in tweaking the bill to garner the support of the conservative House Freedom Caucus, senior Republican leaders have put women's health on the chopping block through things like the MacArthur Meadows Amendment, which has many outraged.

Prior to the ACA, insurance companies could factor in a person's current health status and medical history when deciding premiums, meaning those with pre-existing conditions were often priced out of health insurance or denied coverage altogether. Under the ACA, however, those with pre-existing conditions were guaranteed coverage. The MacArthur Meadows Amendment, co-sponsored by New Jersey State Rep. Tom MacArthur and North Carolina State Rep. Mark Meadows, aims to change that by enabling states to return to the practice of discriminating against those seeking insurance based on their medical history should they choose to lift the ban on denying coverage for pre-existing conditions.

However, the amendment may be particularly devastating to women as it defines sexual assault, postpartum depression, cesarean sections, and domestic abuse as pre-existing conditions that insurance providers can use to deny coverage. The amendment also enables states to strip away preventative health services like mammograms and gynecological screenings. The amendment stands to make survivors of domestic abuse or sexual assault particularly vulnerable to health care discrimination as reporting and seeking treatment for their physical or psychological injuries could result in their insurance being denied or raised.

Even more absurd is the fact the amendment denies that defining postpartum depression, cesarean sections, domestic abuse, or sexual assault constitutes gender-based discrimination. "Nothing in this Act shall be construed as permitting health insurance issuers to discriminate in rates for health insurance coverage by gender," the amendment reads, as Mic reports. However, statistics regarding such conditions say otherwise. One in five women has been sexually assaulted while postpartum depression effects one in nine pregnant women, the Center for Disease Control and Prevention reports.

"My understanding is that it will allow insurance companies to require people who have higher health care costs to contribute more to the insurance pool that helps offset all these costs, thereby reducing the cost of those people who lead good lives, they're healthy, you know, they are doing the things to keep their bodies healthy," Brooks said in an interview on CNN. Sadly, it's not altogether surprising to hear a Republican talk about sexual assault as if it's something women choose.

Yet because the majority of those who get pregnant or are victims of domestic abuse and sexual assault are women, or people who identify as women, it's hard not to see the MacArthur Meadows Amendment as anything but a misogynistic policy that aims to make being a woman a pre-existing condition.