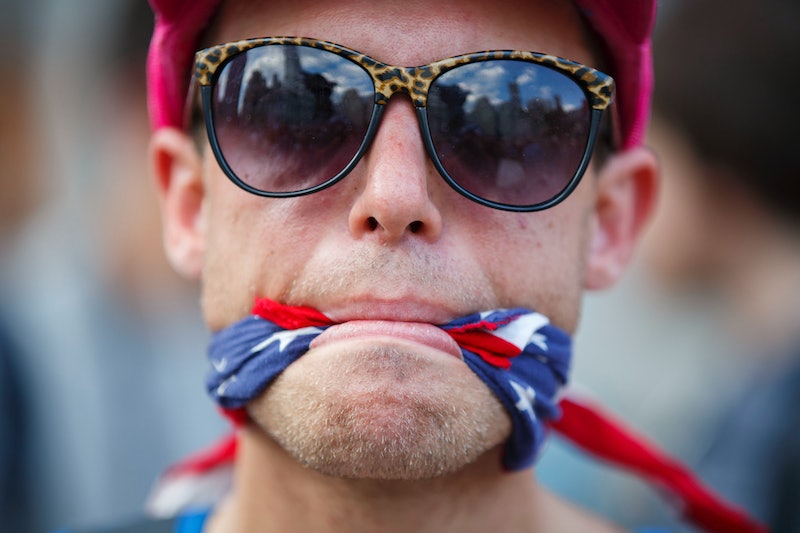 On Monday, Donald Trump took action to reinstate the Mexico City Policy, also known as the Global Gag Rule, which denies U.S. funding to non-governmental organization (NGOs) whose services intersect in pretty much any minor way with abortion services. Much has been said about how this is another example of the Trump administration's war on women's and reproductive rights. However, there is a point that is often overlooked: the Global Gag Rule is also an affront to another fundamental American right, free speech.

The Global Gag Rule is aptly named because it is a violation of the First Amendment right to free speech, according to some of its critics. The rule doesn't just deal in preventing public money from funding abortions. It gags pro-choice advocacy efforts in foreign nations. If international family planning and healthcare NGOs want to receive funding from the United State — which is the largest bilateral donor to healthcare and family planning services in the world — they must agree not only to refrain from providing abortions in countries where it is safe and legal to do so, but they cannot refer women to other clinics for abortions, offer abortion counseling, or even provide literature on the topic. They also are barred from lobbying for pro-choice legislation in the countries in which they are working.

"What we've seen previously when this rule is instated is that it really decimates the family planning and healthcare systems of many developing countries," Elisha Dunn-Georgiou, vice president of programs at PAI, an international family-planning and women's rights advocacy group, tells Bustle.

Without the Global Gag Rule, legislation still exists to prevent U.S. dollars from paying for abortions internationally. The Helms Amendment has barred this practice since 1973. Opponents say the Global Gag Rule goes above and beyond what is constitutional by restricting the services these organizations provide with their own privately-raised funds.

The First Amendment states that:

Congress shall make no law respecting an establishment of religion, or prohibiting the free exercise thereof; or abridging the freedom of speech, or of the press, or the right of the people peaceably to assemble, and to petition the government for redress of grievances.

Creating a law that ties government funding to the condition of restricting free speech and advocacy directly conflicts the first amendment.

"We know what the impact of this policy will be because we've seen it before," Lori Adelman, director of global communications for Planned Parenthood, tells Bustle. "It also stifles free speech, so regardless of whether any one health center or doctor signs onto this policy, we know that its overall effect is weakening to civil society.

This policy stands to roll back the progress made worldwide by family planning NGOS under the Obama administration, which is significant, advocates say.

"We've had a real forward movement over the past eight years in helping to get women onto contraception and get them family planning services," says Dunn-Georgiou. "There's also been in many countries a move towards legalization of abortion services that didn't previously didn't exist last time the the gag rule was implemented. So, there has been a real sea change in the uptick of contraception worldwide as well as an increase in women's access to abortion services worldwide."

But even in the years when the policy has been repealed, the consequences have still been felt, said some Global Gag Rule critics. They argue the policy has had a self-censoring effect on some aid organizations.

"We know that the policy, whether or not in place, has a chilling effect, because many organizations understandably fear that the policy will come back even when it's not in place. So they think, 'Well maybe I should just stay away from this topic entirely or I'll lose access to funds that are keeping my doors open,'" says Adelman.

So how do we do away with the threat of this policy, which is felt even when it is dormant? New Hampshire Sen. Jeanne Shaheen will be introducing a bill this week that will call on Congress to permanently repeal the Global Gag Rule, so it can no longer restrict the work of these international healthcare organizations.

"The Trump administration and Republican leadership have made no secret of their dangerous obsession with rolling back reproductive rights,” Shaheen stated in a press release. “President Trump's reinstatement of the Global Gag Rule ignores decades of research, instead favoring ideological politics over women and families."

If the historic outcome of this past weekend's Women's March is any indication, women are not going to take any legislation that infringes on women's rights lying down, whether stateside or worldwide.

More like this
This Company Will Send STI Tests Right To Your Door
By Lexi Inks
MOBO Awards Found Kanya King On The Woman Whose Grit & Determination Spur Her On
By Kanya King
Prince William Condemns “Unacceptable” Comments Made To A Black Guest At Buckingham Palace
By Shahed Ezaydi
We’ve Got A Text! Another 'Love Island' Series Is On The Way
By Darshita Goyal
Get Even More From Bustle — Sign Up For The Newsletter