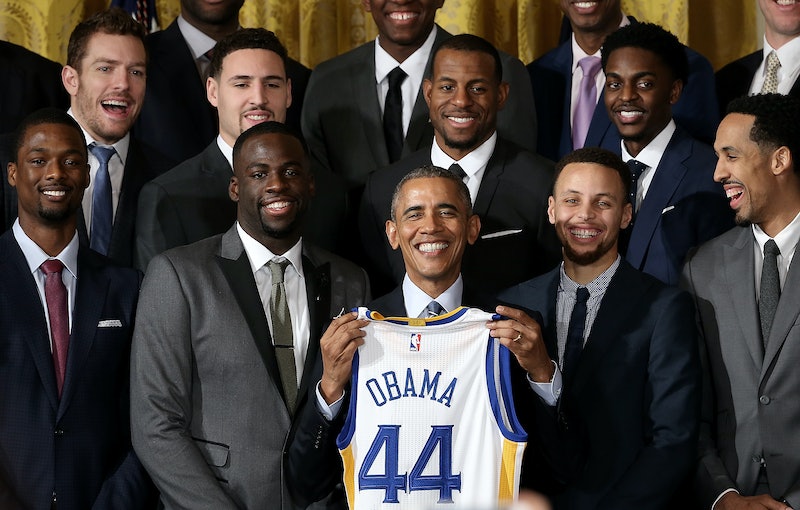 Earlier this month, President Donald Trump faced criticism after serving fast food to the Clemson University football team when they arrived at the White House to celebrate their national championship victory. The Golden State Warriors, however, decided to skip the White House entirely as they celebrated their 2018 NBA title, and instead paid a visit to former President Barack Obama. This week, the Warriors met with Obama instead of Trump in D.C., ahead of their Thursday night game against the Washington Wizards.

Last year, the Warriors decided not to meet with Trump at the White House to celebrate their 2017 championship. Warriors player Stephen Curry said that he "wouldn't" meet with Trump even if he and his team were invited, leading Trump to withdraw his invitation. Then, in 2018 — ahead of the championship game between the Warriors and the Cleveland Cavaliers — Trump preemptively announced that he would not invite either team to celebrate at the White House if they won.

So instead of going to the White House, most of the Warriors decided to privately meet with Obama on Thursday instead. According to ESPN, a Warriors staff member initially posted a photo of the team with Obama to his Instagram account, though that photo has reportedly since been deleted. However, Warriors player Draymond Green then posted his own photo on Instagram, captioned "Whole gang with the 44th president of the United States today."

"It was good," Green told ESPN about the meeting. "A private team meeting, team event, it was good."

A Warriors team official reportedly told ESPN that Curry played a role in organizing the team's meeting with Obama — given their friendship and their collaboration on the My Brother's Keeper initiative. Curry, however, told ESPN with a smirk that he had "no idea" how the meeting came about.

The Warriors previously visited the White House back in 2016 — back when Obama was still president — to celebrate their 2015 NBA championship title. During that visit, the team gave Obama a Warriors jersey with the number "44" on it, to signify his position as the 44th president of the United States.

The Warriors' coach, Steve Kerr, told reporters that he was not part of the group that met with Obama, per The Washington Post. However, Kerr said he was "happy" that members of his team were able to meet with the former president.

Obama was not the only prominent political figure that the Warriors met this week. Following their Thursday night game against the Wizards — which they won 126 to 118 — they were greeted by House Speaker Nancy Pelosi, who took a picture with Curry and told Green that she had once purchased his jersey during a charity auction.