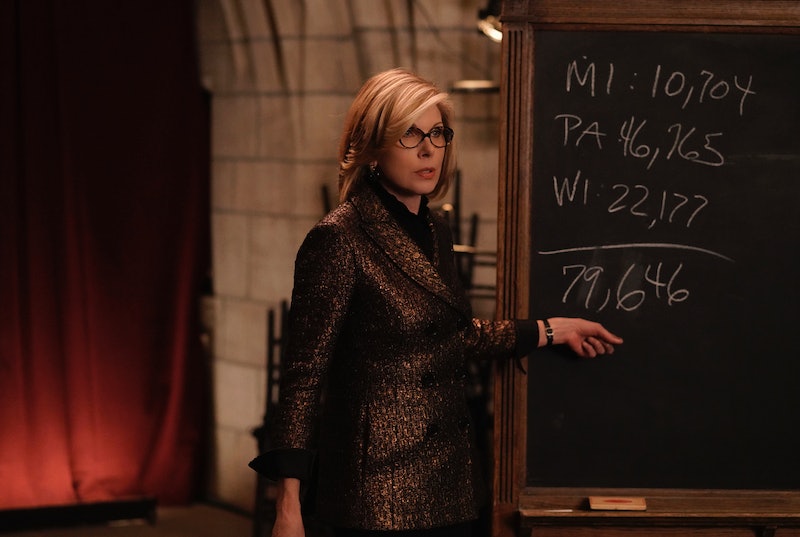 In the Good Fight Season 3 episode, "The One Where A Nazi Gets Punched," the opening titles don't appear until a whopping 17 minutes into the episode. While you may be tempted to skip through the interruption, the sequence provides a perfect break from the episode's quick action. The Good Fight theme is unpredictable in that way, sometimes appearing before an episode begins, sometimes a few minutes in following a cold open, and sometimes a third of the way in, but every time it appears, the Good Fight theme song makes its presence known.

The Good Fight theme song, and much of the David Buckley-composed score for both The Good Fight and its parent series The Good Wife, sounds more appropriate for a British period drama like The Favourite or Downton Abbey than a Chicago-set legal drama, but the classical score is just part of what gives the show its unique flavor. The Good Fight theme song sums up the mood of the show just perfectly as the interplay between gentle strings and a calming flute grow and eventually explode into a flurry of timpani blast and choral stings.

The heft and power of the song is matched with the sight of office items and Trump-adorned televisions exploding.

The opening sequence resulted in one of The Good Fight's only Emmy nominations thus far for Outstanding Main Title Music Theme. Buckley's Good Fight theme first appears in a different form in later seasons of The Good Wife, on which he served as the composer for the majority of the series. While The Good Wife didn't have a theme song, so much as it had a few notes that played during a title card, Buckley's impression was felt in pieces such as "Countdown To Execution" and the titular composition from the series-defining episode "Hitting The Fan" in addition to some of the series' goofier musical moments.

When attempting to conceive how to revamp the background Good Wife music for The Good Fight, Buckley told German publication DWDL.de that the entire composition was reworked with the idea of explosions in mind. "I knew there would have to be an enormity to what I was doing. And I knew I had to — as I often do for this show — navigate between being comedic and serious. I couldn’t be jokey, but I had to let the audience know they were going to enjoy themselves."

While the setting and subject matter of the show may not seem to lend itself to a sweeping classical soundtrack, the period-inappropriate soundtrack highlights The Good Fight's interest in power, class, and royalty — all themes that are popular in the period dramas that the Good Fight score sounds ripped from. Between the empowering score, the hypnotic imagery that accompanies it, and the fact that it always shows up at the perfect time in each episode, The Good Fight theme song proves that a show's theme song is just as important as any scene and deserves the full attention of its audience.