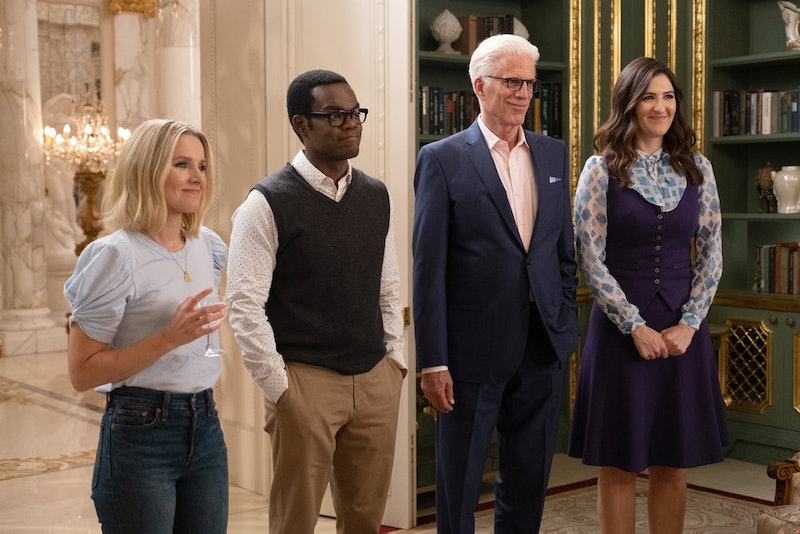 Light spoilers ahead for The Good Place series finale. The Good Place cast is just as emotional as you are that the show is ending. During the series finale on Thursday night, the series' stars took to social media to commemorate their time on the show. Kristen Bell (Eleanor) and Ted Danson (Michael) both live-tweeted the finale, while D'Arcy Carden (Janet) posted on Instagram throughout the day.

"Love this guy forever and ever," Carden wrote alongside a photo of her with Good Place creator Michael Schur. In another post filled with several fun group shots with her castmates, she wrote, "could never explain what these people mean to me. i love them. forever."

Manny Jacinto (Jason) was just as sentimental, captioning a series of Instagram photos, "These are only a few of the hundreds of people I've grown to know and love throughout this Bearimy. To everyone behind and in front of the screen, and to all the loving fans that watched. Thank you for making this show so forking special."

Bell, meanwhile, posted several behind-the-scenes tidbits on her Instagram Story, including a martini with 18 olives, a video of William Jackson Harper (Chidi) dancing in his mailman uniform, and a close-up of Derek and Mindy St. Claire's sex toy closet from the Medium Place.

The true pièce de résistance, though, is the video Danson tweeted just after the finale from his last day of filming, in which he gives an incredibly touching goodbye speech. "This has been the most beautiful day, which is a reflection of the most beautiful show I think I've ever been on, with so many beautiful people who are like-minded in this astounding place," he says, holding back tears. "I will never forget it. Much love."

We'll never forget you either, our dear, sweet Michael.

More like this
Nicola Coughlan Just Revived 'Derry Girls' In The Most Unexpected Way
By El Hunt
Olivia Rodrigo Reunited With Joshua Bassett On The Red Carpet & Twitter Can’t Handle It
By Jake Viswanath
Kanye West Has The Most Kanye Reaction To Kim Kardashian & Pete Davidson's Split
By Jake Viswanath
The 'Big Brother 24' Racism & Bullying Controversy, Explained
By Jake Viswanath
Get Even More From Bustle — Sign Up For The Newsletter