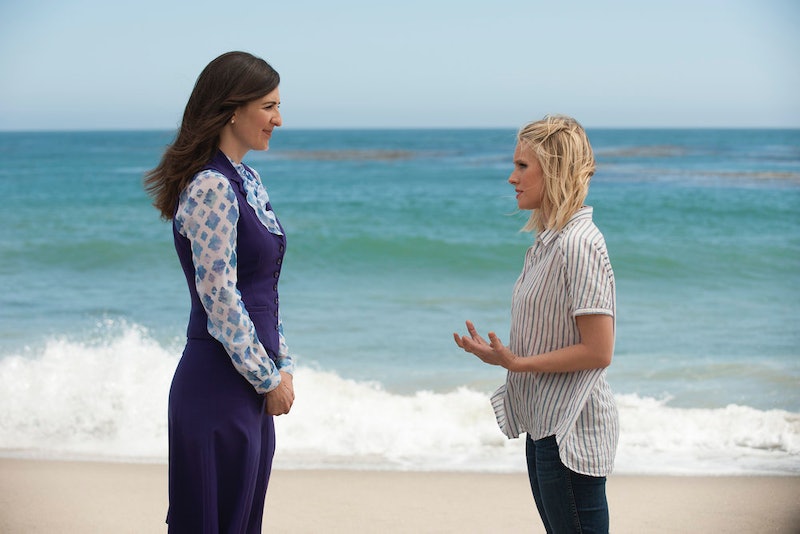 At surface level, The Good Place plays like a whimsical, lighthearted sitcom — the kind of show you queue up for 30 minutes of innocuous comedy and escapism. But it doesn't take long to realize that its joke well runs much deeper. In Season 1, it probed the boundaries between "good" and "bad." In Season 2, it raised questions about whether those qualities are innate or learned. And now, by its midseason finale, The Good Place has begun to feel less like the sitcom it bills itself as and more like sci-fi masquerading as something else.

That's not to say The Good Place is on par with something like, say, Black Mirror, but it does tackle themes often examined within that genre. Take, for example, the most basic elements of its premise. The point system that determines whether or not souls wind up in heaven, hell, or — in Mindy St. Clair's case — somewhere in between, bears a loose resemblance to the social scale depicted in Black Mirror's "Nosedive." And the afterlife Eleanor, Chidi, and co. inhabit immediately recalls the simulated realities found in The Matrix, Star Trek, Twilight Zone and many, many more. Whether they're suffering through a torture-tailored inferno or scrambling to hold together some fro yo-laden utopia, the fact of the matter is that they're dead, and their world — whatever it looks like — is nothing more than an elaborate mental construct.

The Good Place's shift toward sci-fi was not some sudden, seismic deviation; these elements have always been at the heart of the show. But it wasn't until its brilliant Season 1 finale that they came into full focus, and as Season 2 has picked up steam, they've become increasingly explicit. The series has, of course, continued to ponder what constitutes "good" and "evil," but it's also introduced a question near-synonymous with sci-fi lore: what does it mean to be human?

This is most evident in Michael and Janet, two intrinsically non-human characters. As a literal demon, Michael is inherently evil, and his singular purpose is to inflict torment without conscience. Janet, on the other hand, is the celestial equivalent of a smartphone. She's likable and cheery, but is expressly designed to be detached and matter-of-fact. Even when she was married to Jason, she didn't quite grasp the weight of what it meant. But somehow, even against their deepest impulses, Season 2 has seen Michael and Janet soften into moral, emotional beings. In Episode 6, Michael couldn't bring himself to "kill" Janet because, after an actual eternity, he'd found in her his first true friend. That he can care about someone else signifies his grasp on compassion; That he can care about someone like Janet, a thing, not a person, that makes no rational sense to care about, that makes him human.

Janet, meanwhile, has been struggling with real, genuine emotion. For Jason, the countless reboots have obliterated any memory that they were ever a married couple, but for Janet — who gets more sophisticated with each reset — they've only intensified her love for him, and seeing him with Tahani is too much for her to bear. Her response isn't calculated, like a computer, but fittingly flawed — a disastrous spiral that should feel familiar to anyone who's gone through a bad breakup. She suppresses her feelings, leaps into an ill-fated rebound, and eventually resigns to the wane of heartbreak. When Eleanor asks Janet if she's worried she'll start glitching again, she responds, "I think I'll be okay now that I understand what I'm going through," demonstrating a sense of maturity and self-awareness that feel fundamentally human, or at the very least, beyond the capabilities of what Janet is designed to be.

It's these story lines that feel so distinctly, inarguably sci-fi. In the last few years alone, projects like Her, Westworld, and Bladerunner 2049 have all challenged the idea of humanness. Generally, it's a discussion reserved for hyper-intelligent technology, but The Good Place has proved it doesn't color inside the lines; it's unsurprising that it found a way to approach the debate from a fresh angle. And, like many great sci-fi stories, it doesn't attempt to answer the questions it poses, but rather makes you think, sparks conversation, leaves you wondering.

It's still incredibly forkin' funny, but beneath all that humor is a show that, like its characters, is too complex to put into one box.