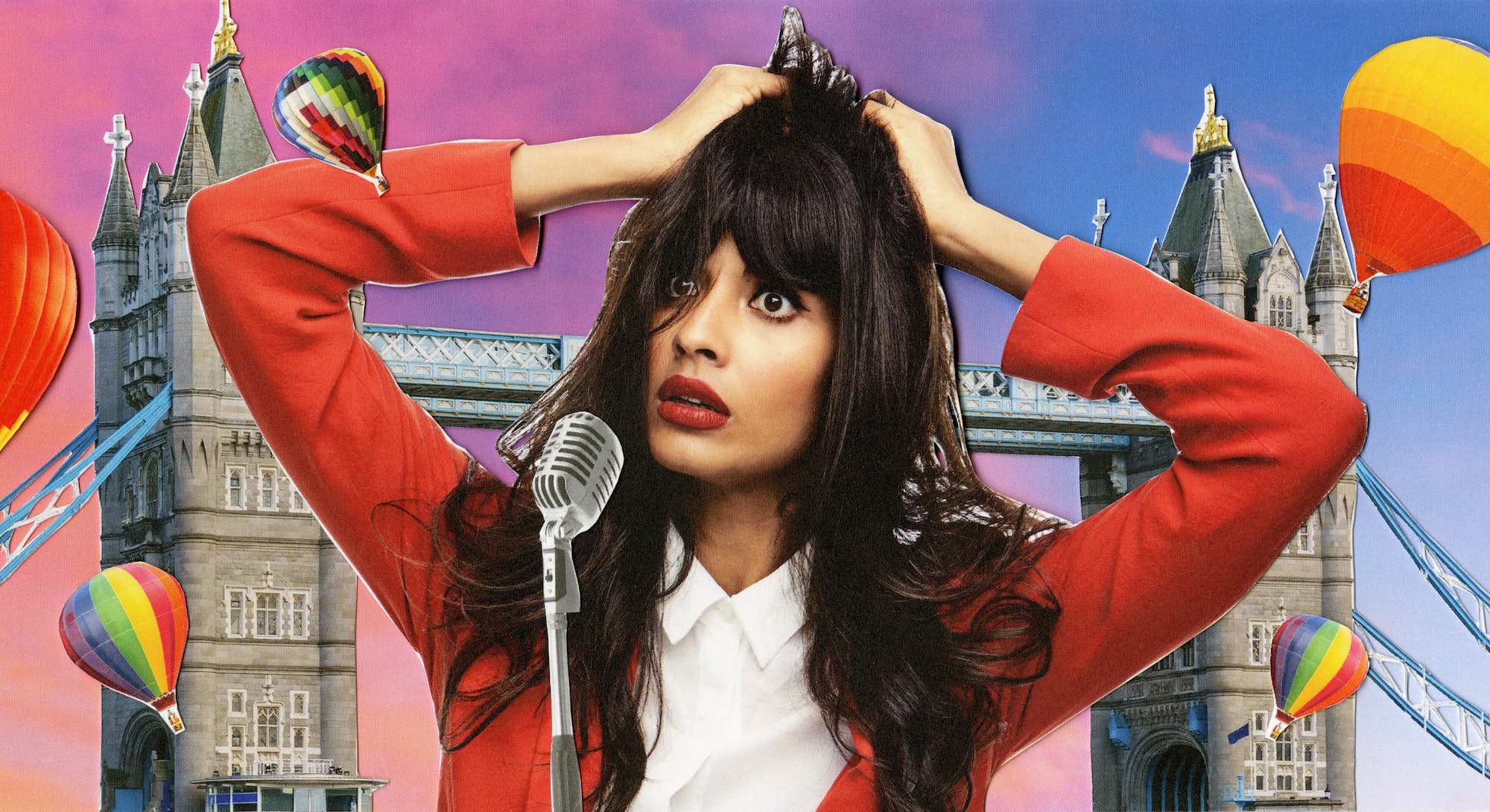 I hate to break it to you, but we're in the bad place. While we often flock to Hollywood's many delights (especially when they're marathon-able on Netflix) to escape the reality that threatens to make us all mad day in and day out, one starlet is determined to disintegrate those delusions. (Sorry.) While many of Hollywood's dark corners have been uncovered in the last year, there's one piece that's still hiding in plain sight. And The Good Place star Jameela Jamil is dedicated to making it unmistakably apparent to us all.

"I have a very big mouth," she says with a lofty laugh. She's sitting crosslegged on a couch at Culver City's breezy Smashbox Studios, in a tomato-red suit she says she loves because it allows her to sit "like I’m about to give birth." She says she prefers "comfortable" and "liberating" suits to the fluffy, ruffly dresses that her Good Place character Tahani is known for or the fashionista-approved frocks she first donned upon entering the entertainment industry as a TV & radio reporter in England. "I think that the industry just sort of pushed me towards that and moving to America has allowed me to get a chance to get away from all that and find my own thing and be comfortable. Sit like a woman in labor again."

Though her look, with its matching crimson lipstick and strawberry earrings, is playful, Jamil is dead serious. While her character Tahani is known for starting charities and hosting fundraiser balls solely for the prestige and the fame, Jamil has her sights set on actual change with her Instagram (and soon-to-be foundation of the same name) called iWeigh. Jamil encourages women ("and men!" she specifies) to send in photos of themselves with descriptions of what they "weigh" in accomplishments and character, rather than a number on a scale, and then posts them one by one. And while it's affording her some additional fame, when her iWeigh movement started, she wasn't setting out to be the face of a foundation or even a hashtag. She was just pissed off.

"Men are told to be successful enough to date a supermodel, women are told just to be a supermodel. This is ridiculous. It’s so empty and boring. So I felt empty and bored, and I snapped one day when I saw that Instagram post that took five, six, however many of them there are — loads of successful business women — and just wrote their weight across them as if that was their net worth. I just can’t," she says, referring to a meme that showed the weight of each Kardashian & Jenner sisters (below). Jamil posted the awful meme along with her own improvement on the meme: writing out what she "weighs" with elements like "I make an honest living" and "I speak out for women's rights." The idea caught on and became a movement, much to Jamil's surprise.

"I didn’t mean to start a campaign," she says, admitting that she cried when thousands of women began responding to her "war path" tweet and accompanying Instagram story with their own "weights."

"A lot of women have been writing to me that they’d never even considered what was good about their lives until the iWeigh thing. They were so busy hating themselves for the way they look."

Jamil has firsthand experience with that feeling. She's spoken openly about being told she was "too old" or "too ethnic" or "too fat" for Hollywood and the fact that magazines have photoshopped her nose and skin to look more caucasian. But, she says, the industry's standards started hurting her long before she joined its ranks — that's part of the reason she's so determined to turn the iWeigh movement into a foundation. "I’d like to be a voice of reason because I didn't have any of those when I was growing up. When I looked to celebrities everyone was just almost anorexically thin and heroin chic was a term that was used unironically or not in a sad way, but as in a glorified, high fashion term," she says, her voice dropping for a moment. "And so, I’m in my 30s, I finally know who I am internally, and I don’t need to be reassured by other people. I don’t need to meet anyone else’s expectations for the first time in my life, and I could have gotten to this place much earlier if it hadn’t been for this industry. And not just being in this industry, but seeing the magazines and seeing what’s online and seeing social media. I think it’s really held us all back."

Looking at Jamil's most recent contributions to body image, women's rights, and consent conversations, you might think she's a rather severe person. From calling out Emile Hirsch for being cast in Quentin Tarantino's next film despite being convicted of assaulting a film executive in 2015; to bemoaning the fact that Kim Kardashian promoted appetite suppressant lollipops; to taking aim at a culture that has turned consent into something that can be coaxed or convinced out of a sexual partner in the wake of the Aziz Ansari scandal; to telling me that how frustrated she is with the lack of consequences for powerful men ("If you hurt a woman, you have to bugger off. Forever. I don’t care about 'sorry.' We have to make examples of these men until it stops"), she's often on a bit of a soapbox.

But as she delivers these drops of wisdom, she takes up a lackadaisical pose, listlessly pulling her earrings in and out of her ears. She wafts between blithe quips and hard truths. When she's not ribbing me for having "a horn for Ol' Danson" (her The Good Place co-star, Ted Danson) or filling me in on how attractive her other co-star Manny Jacinto is IRL ("It's offensive ... He’s too hot to fancy, you know what I mean? It’s too much. He needs to chill the fuck out") she lays down her unrelenting thoughts about a culture that rewards thinness and privilege, not as soundbites ready for the picking, but as unfortunate facts that, quite frankly, bum her the hell out. There's no spark in her eyes when she delivers a closing line, no notion that she's just landed the dismount. She's quite clearly just tired of all of it.

"I consider myself kind of a Trojan horse in this industry because I want to expose the secrets and I want to change all the things about this industry that really hurt me and my friends when we were young," she says. "What I’m saying isn’t anything profound or controversial, I’m just telling people to stop treating women like shit. Please stop treating women like shit. We are 50 percent of the world and we made you and then we fed you with our tits. Stop it."

Of course, it's a bit easier to be an effective Trojan horse when your audience is feeling receptive, and Jamil's platform is one that appeals to a rather thoughtful, mindful group of people. Her only claim to fame in the U.S. is her first ever acting gig on The Good Place, which is technically a sitcom, but is more realistically a parable on good and evil, with doses of philosophy to drive it all home. ("Kierkegaard, what a weird punch line," she says with a laugh.) The series focuses on four deceased humans who are sent to The Good Place only (nearly two-year-old spoiler) they're actually in The Bad Place, and even the ones who originally seemed like saints (a moral philosophy professor whose learnings render him incapable of actually living or making a single decision and Jamil's Tahani, who's raised millions for charity, but only in the service of gaining famous friends and impressing her parents) are bad seeds. And while the series sounds like a show that could never get a foothold on network television, it's still here.

"I don’t think it is too high-concept for network. I think, if anything, network needs to become more high-concept. Like, the people can handle it. We didn’t bomb," she says. "I think it’s the fact that [creator Michael Schur] pushes boundaries and he teaches people something and it’s a show that makes people talk and think differently — I think about morals way more than I ever used to."

She points specifically to the "points system" devised in Season 1 — the idea that for every action we humans do on earth, we either lose or gain points for a final score that determines whether we go to The Good Place or The Bad Place. Tell a woman to "Smile" and lose 53.83 points, commit harassment (sexual) and it's negative 731.26, but bring your own bags to the grocery store (+1958.96) or help a hermit crab find its shell (+17) and your score goes back up. Jamil says it governs her every move, even though she knows it's a work of fiction. "I’ve become a better person for sure and I’ve made sure that the good things I do are from the heart, not because they are the right thing to do, but because my motives are as pure as they can be for an English person," she offers, justifying her English person quip with a quick "We’re terrible people, that’s why we’re so quiet."

But as we approach the third season of this implausible sitcom, Jamil says it's only going to get, well, good-er. While she won't divulge how ("We could be lovers and I wouldn’t tell you a thing"), she will describe it with emojis (the "aubergine" and the "shocked emoji with the blue head") and say it's the funniest season and includes the highest caliber guest stars the tiny sitcom has ever seen. "I’m working with one of my all-time comedy heroes next week. I must try very hard to not shit my pants — shirt my pants," Jamil says, making a last minute correction to Good Place-sanctioned curse words (those familiar with the phrase "Holy motherforking shirt balls" know what I mean).

What she can divulge, is that once she's done filming this season of the NBC series (she's only got three episodes to go when we speak in early July), she's fully focused on setting up an iWeigh foundation and, hopefully, getting women to feel the way she now does. "I feel very free and I actually feel very happy whenever I see what society would view as flaws and stuff. Like I wanna post those photos. There’s a photo of me from today, where I look about 25 months pregnant because of the way my suit was blowing in the wind, and I was like, I really like that photo. You can keep all those photos. I just feel very comfortable with myself and showing me and all of my humanity. It's good and it's also an excuse to never have to go to the gym," she says.

And as she gets closer to making her dream a reality — she's found a "wonderful woman" to help her with that process — her biggest hurdle is getting people to just care. And yes, celebrities would be mighty helpful in getting the masses to care, but Jamil is also hopeful that non-celebs will continue to send her their iWeigh photos and start the process for themselves: "Anyone who reads this and wants to contribute their own post of about what it is that they think they’ll be thinking about on their deathbed. And Christ, I hope it’s not their cellulite. I won’t be thinking about mine," she says, "And I have a lot."