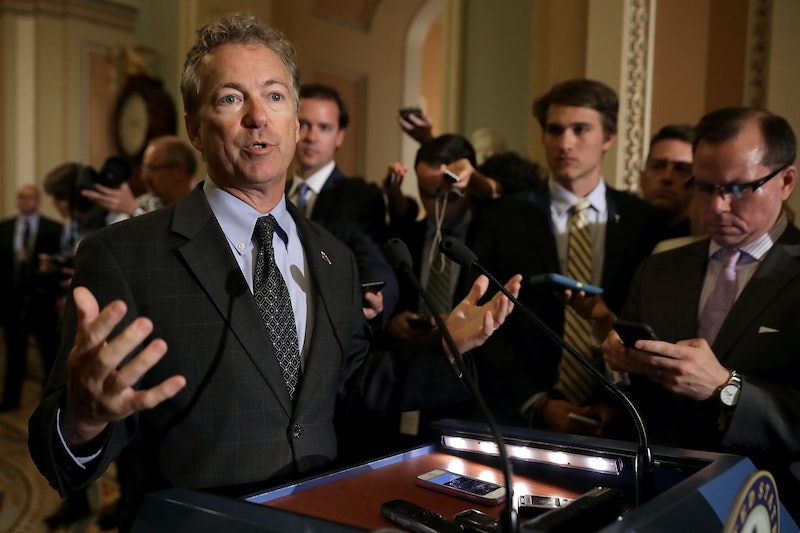 On Tuesday morning, with a hotly anticipated motion to proceed vote on the horizon, Kentucky senator Rand Paul declared the Obamacare replacement bill effectively dead in a string of tweets. Paul announced that Senate Majority Leader Sen. Mitch McConnell told him that the "plan for today is to take up the 2015 clean repeal bill as I've urged," and that Senate Republicans would need 60 votes for its health care bill to pass, which would be impossible even if all 52 GOP senators vote yes.

A member of the Senate GOP's hardcore conservative wing, Paul has long opposed his party's legislation to replace the Affordable Care Act, arguing that it doesn't go far enough, and that the GOP should instead vote on a full and total repeal of the health care law with or without an immediate replacement. And according to his analysis, at least, that may be what ends up happening.

It's all thanks to the Byrd Rule, which dictates that the Senate process of reconciliation can't be used to pass bills containing elements that the Senate parliamentarian deems irrelevant or unrelated to the budget. This is crucial, because a reconciliation vote only requires 50 votes for passage, while a vote on a normal bill requires 60 votes to break a filibuster.

Considering that the Republicans were struggling mightily to cobble together just 50 votes for their hyper-controversial, hyper-unpopular health care legislation, and that they only control 52 seats outright, a 60-vote threshold is a virtual death sentence for the bill.

Which is why, according to Paul, the Senate leadership is now considering what he's been begging for all along: a vote on fully repealing the ACA, even though it won't immediately be replaced with anything. Many Republican senators have floated the idea of voting for a full repeal which delays implementation by two years, thus giving the GOP-led Congress time to craft a replacement policy, and pushing the impact of its decision back past the 2018 midterm elections.

It's unclear if that's precisely what will be voted on if the motion to proceed passes on Tuesday, but it's clearly what Paul is rooting for. For the record, the Congressional Budget Office's scoring for full repeal is even more cautionary than its scoring for the Senate's replacement bill ― more than 32 million Americans would be projected to lose their health insurance if a full repeal were passed.

While it's not clear when precisely the motion to proceed vote will occur, it's widely expected to be happening on Tuesday afternoon. At the time of this writing, it's an open question whether the GOP will get the 50 votes necessary to move to floor debate. If it does, however, a vote on full repeal is the likely outcome.