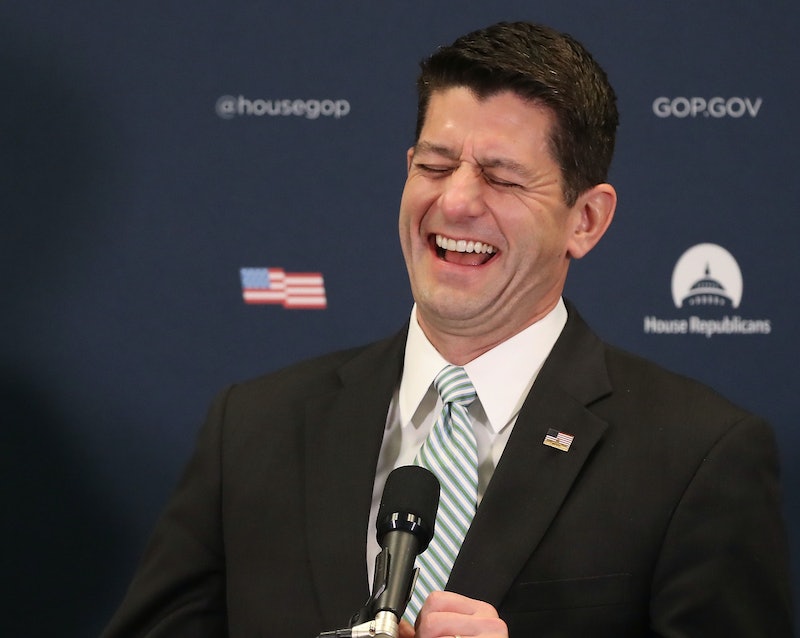 As legislation aimed at repealing and replacing the Affordable Care Act narrowly passed through the House on Thursday, House Republicans were reportedly already busy organizing a party to toast themselves. As an amended version of the American Health Care Act passed the House in a narrow 217-213 vote, multiple journalists reported seeing cases of beer being rolled into the U.S. Capitol. Although no fete has been confirmed, many on social media were angered at the idea of House Republicans throwing a party to celebrate the AHCA, a bill that stands to dramatically raise the cost of insurance for those with preexisting conditions while leaving an estimated 24 million people without health care.

As votes on the AHCA were being counted in the House, Alexandra Jaffe of Vice News reported seeing "cases upon cases of beer" being rolled into the Capitol on a cart via Twitter. Any efforts to roll the drinks into the building incognito were, it seems, a complete failure, as Jaffe reported being able to see "Bud Light peeking out from the sheet" draped over the cases. Although Jaffe noted she did not know where the beer cases were being taken or who had ordered them, the AHCA was by far the biggest piece of legislation up for a vote in the House on Thursday.

As curiosity about the alleged cart full of beer continued to grow on Twitter, Jaffe tracked down the cart to ask the person pushing it where it was being taken. "Asked if they were going to a GOP conference meeting & he said 'no, different meeting,' no further details," Jaffe tweeted along with a picture of the cart.

Or perhaps there was no party, and the Bud Light seen at the Capitol was merely meant to be an aperitif for the House Republicans heading to the White House to mark the AHCA's passage at a press conference in the Rose Garden. "Republicans will be having a big press conference at the beautiful Rose Garden of the White House immediately after vote!" President Donald Trump tweeted Thursday. Dana Bash, CNN's chief political correspondent, reported two GOP sources had told her House Republicans planned to travel to the White House "for [a] victory event" following the vote.

"Millions of Americans are about to lose health care coverage and the Republicans are drinking beer. Outrageous," Rep. Rosa DeLauro tweeted.

If House Republicans are popping open cans of Bud Light to celebrate the AHCA's passage in the House, it's a party seven years in the making as many within the GOP have been eager to see Obamacare repealed since the day it became law. But party or no party (or drinks aboard a party bus), it seems beyond tasteless to celebrate legislation that stands to leave so many people without insurance.