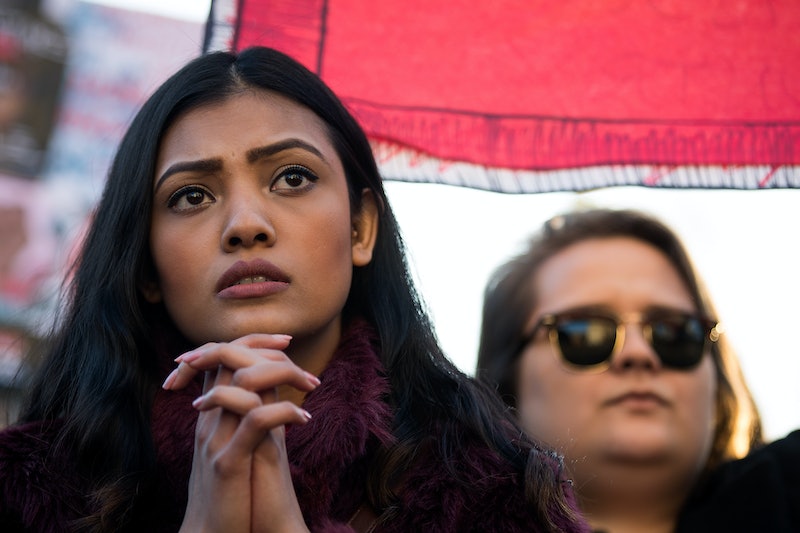 The Senate voted to pass a sweeping GOP tax bill on Saturday morning while Americans were sleeping, in a move that was sharply criticized by both Democrats and the public. While the biggest takeaway is that the wealthiest people and big corporations would receive massive tax cuts and reap the most benefits, the GOP tax bill would dramatically affect millennial women by slashing investments in women and families programs, gutting a key provision of the Affordable Care Act, and placing more financial burdens on young women.

The bill included key revisions from the original House legislation passed on Nov. 16. A joint conference committee will have to figure out an agreement, as both chambers have to pass identical bills before President Trump can officially sign the legislation into law. Trump has said that he wants to sign a tax bill by Christmas.

The 479-page Senate legislation — which was still being worked on nearly up until the vote — would cut home mortgage interest deductions and eliminate higher education tax credits, two provisions that could potentially make it harder for millennial women to buy homes and pay for their college education.

It would also place a financial burden on working moms by excluding low-income children from tax credits, meaning that the young women who could benefit most from tax breaks now could face even higher financial burdens when it comes to college, health care, or taking care of their families.

The Senate bill would allow people to opt out of the Affordable Care Act without any penalties, meaning less healthy people will be inclined to buy health insurance. As a result, premiums would rise, because there would be less healthy people in the market.

Nearly 13 million people could lose their health coverage if premiums go up, according to Vox — this would include millennial women who rely on the Affordable Care Act for birth control, among other reproductive health care benefits. After Obamacare took effect in 2010, the rate of uninsured millennials fell by 40 percent. Almost 3.6 million millennials also gained coverage as a result of Obamacare.

It Will Hurt Millennial Moms And Their Families

While the top 1 percent will benefit from the biggest tax breaks from the bill, lower-income families and women in the bottom 20 percent bracket will actually see a 0.1 tax increase in order to make up for the tax cuts. Because millennials have a fairly low median income, coupled with the fact that the new bill will add more than $1 trillion to the national debt, this could be a huge burden financially for millennial women. A higher national debt could lead to increased prices on basic goods and services and higher interest rates, which would make it more difficult for young people to purchase a home.

Families and children could also be hurt by the bill. People, including young moms, will no longer be able to claim personal exemptions for themselves, their spouses, or their kids under the Senate's revised bill.

Millennial moms would also be impacted because the bill excludes 10 million low-income children from claiming tax credits. Because women still mainly shoulder the responsibility for child care, families in the lowest income bracket won't receive tax benefits for their children when they're the ones who need it the most.

It Will Hurt Children Who Attend Public School

This bill would also eliminate the ability for public schools to claim tax deductibles under state and local taxes. Experts have said that this provision in the tax bill could cost public schools upwards of $17 billion and could hurt the quality of education for children. Currently, nearly 51 million students attend public school, accounting for about 90 percent of the students in the U.S.

Public schools with middle-class students tend to be higher quality, because they can afford teachers with higher salaries and extracurricular activities. Getting rid of tax deductibles also makes it more appealing for wealthy families to opt out of public school and send their kids to private school. This could hurt young parents who are more likely to be unable to afford private schools, because the basic quality of public education would decline as these incentives disappear.

The current law allows property taxes to be deducted from the federal tax, while the GOP Senate bill put a cap at $10,000 for property tax deductions. The new bill also lengthened the amount of time you must live in a home in order to claim tax-free exclusion when you sell it. For millennial women, this could make it more difficult to pay off a mortgage or buy a home, because they would no longer be receiving mortgage interest deductions.

The Senate bill also has repercussions on higher education, and could make it more difficult and expensive for millennial women to attend college and graduate schools. Because taxpayers are only allowed to deduct up to $10,000, colleges fear that wealthy Americans will have less incentive to invest in public schools since they'll no longer receive a tax break, possibility leading to increases in college tuition fees.

Currently, more than 1-in-5 millennial women live below the poverty line and millennial women have higher student debt than men. By limiting educational opportunities for young women and placing more financial hurdles on moms, the GOP Senate tax bill could make life more difficult for young women and families in order to give tax cuts to big corporations and the rich.