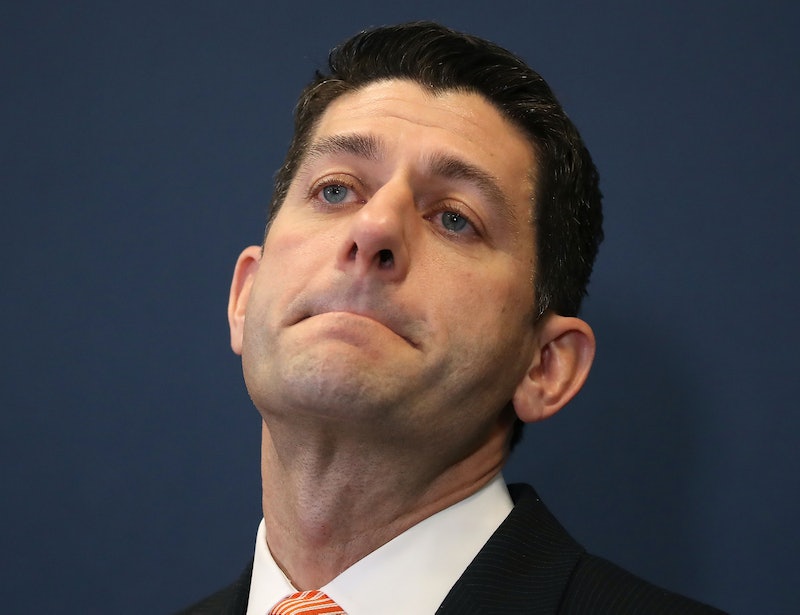 Although Republicans are vocal about their desire to repeal the Affordable Care Act, they haven't provided specifics on what a repeal bill would look like. But on Friday, Politico published what's alleged to be a draft of House Republicans' Obamacare repeal legislation. The document is dated Feb. 10, and it is not clear what changes legislators have made to the plan since then. However, according to this version, Republicans plan to eliminate Obamacare's Medicaid expansion, the subsidies it provides low-income Americans, and all of its taxes. The office of Speaker of the House Paul Ryan didn't return Bustle's request for comment on the document's veracity.

According to the document, House Republicans plan to eliminate the foundational elements of Obamacare: Namely, the expansion of Medicaid, the discounts that low-income Americans receive when purchasing health care plans, and the individual mandate. It also repeals the minimum coverage standards all health care plans must adhere to, which include maternity and pediatric care, and eliminates funding for Planned Parenthood.

Like Obamcare, the plan detailed in the leaked document offers subsidies to Americans for use in purchasing health care. But while Obamacare based those subsidies on income, with poorer Americans receiving more generous subsidies, the Republican plan as outlined in this document instead bases it on age. Younger Americans, regardless of medical history or income, will receive fewer tax credits, while older Americans will receive more substantial subsidies. However, the plan also allows insurers to charge older patients more for premiums, a practice Obamacare places sharp limits on.

There are many more components to the draft proposal, which runs roughly 100 pages long and is available to read here. However, it should be stressed that this is still very much a preliminary document, and its source is unclear. Although its markings indicate that it's being drafted by the House, as opposed to the Senate, it's unclear which subcommittee in came from, which lawmakers crafted it, and most importantly, whether any changes have been made to it since this version was completed.

Furthermore, any Obamacare repeal legislation will have to be passed by both the Senate and the House in order to land on President Donald Trump's desk, and the two bodies don't always act in lockstep — especially on major pieces of legislation like this.

Finally, it's not a given that Trump will sign any old Obamacare repeal bill that the House sends him. He's insisted that any repeal bill must also provide universal health coverage to Americans — and while the leaked House proposal hasn't yet been graded, a similar Republican plan to repeal Obamacare would have resulted in roughly 18 million Americans losing their health coverage, according to an analysis from the Congressional Budget Office.

If genuine, the document that leaked Thursday provides a helpful insight into the House GOP's thinking with regard to Obamcare repeal. But it's far from the final word on the matter.