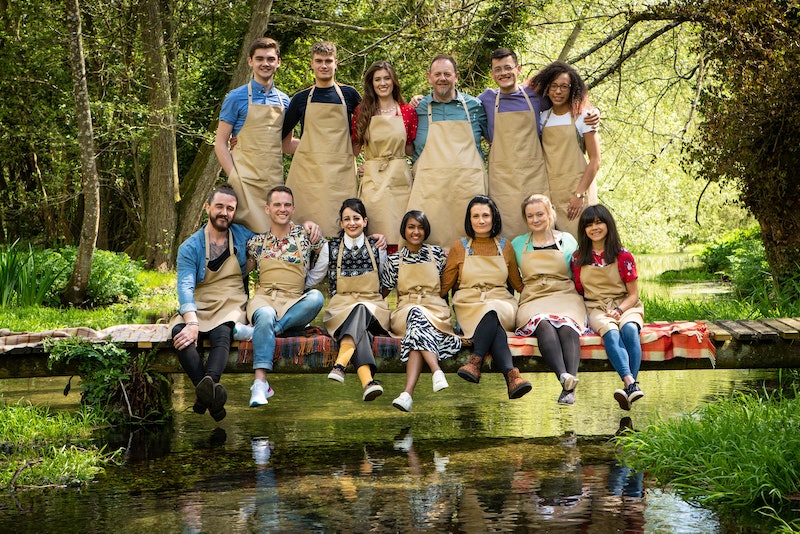 If you've been having Great British Bake Off withdrawal symptoms, I have good news for you: the show is coming back reaaaal soon. And to whet your appetite for the incoming soggy bottoms and other numerous puns we're sure to encounter this year, the GBBO 2019 line up has been revealed, so we can start guessing our front runners already.

This year's lineup is decidedly younger than previous years, with more than half of the contestants in their 20s. Flying the flag for millennial bakers (yuuussss) we have a teacher, a vet, and a sportswear fashion designer, among others. The line up will see 13 bakers (instead of the usual 12), taking to the baking tent to cook up a storm.

The show will be returning on Tuesday 27 August, and will feature the same judges (Paul Hollywood and Prue Leith), as well as the same pair of hosts (Noel Fielding and Sandi Toksvig).

Take a look at the full line up here:

Rosie: A 28-year-old veterinary surgeon who live in Somerset. Rosie bakes consistently in order to unwind, and first developed a passion for it when she was given a children's baking booking at a mere five years old.

Phil: A 56-year-old HGV driver who bakes four or five times a week, and began baking way back in school during his home economics class. It sounds as though he's a bit of a bread expert, often baking focaccia, granary bread and brioche.

Michael: A 26-year-old theatre manager and fitness instructor who lives in Stratford-upon-Avon. His baking is particularly inspired by his Indian heritage.

Henry: At 20, Henry is the youngest contestant, and is still a student at Durham University. He studies English Literature, and tests out his baking on his uni housemates.

Priya: A 34-year-old marketing consultant who lives in Leicester. She started getting really into baking after she was given a mixer at her wedding. She likes to cook vegan, and is also writing a novel.

Steph: A 28-year-old shop assistant living in Chester. She has a passion for wellness and sport, which inspires her slightly healthier bakes.

Helena: A 40-year-old online project manager who lives in Leeds but spent much of her childhood watching her Spanish grandmother cook and bake.

Dan: A 32-year-old Support Worker from Yorkshire. Dan started to get properly into baking at 21, when he wanted to impress his girlfriend. He went on to bake the couple's wedding cake.

David: A 36-year-old London-based international health adviser who is originally from Yorkshire. David's mum loved to bake, and his own passions escalated when he went to Malawi, and he learned to build an oven out of an oil drum, as well as inventing a cake that could steam cook over a village fire.

Michelle: A 35-year-old print shop administrator working in Tenby, Wales. She bakes almost every other day, usually making fresh bread for breakfast, and delicious puddings for after dinner.

Jamie: A 20-year-old part time waiter who was born and raised with his identical twin brother in Surrey. Jamie was taught baking basics by his family, but was inspired by Bake Off itself to take his skills to the next level.

Amelia: A 24-year-old sportswear fashion designer from Yorkshire. Amelia developed her baking skills while at uni, and her proudest bake is the snow leopard cake she made for her nephew's fifth birthday.

More like this
'The Last Of Us' Has Officially Been Renewed For Season 2
By Darshita Goyal
Mollie Gallagher Has A Deeply Personal Reason For Taking Up Skating
By Maxine Harrison
'Bridgerton's Regé-Jean Page Is The World’s Most Handsome Man
By Darshita Goyal
Turns Out George Clooney Is A Huge Fan Of This Classic British Game Show
By El Hunt
Get The Very Best Of Bustle/UK
Sign up for Bustle UK's twice-weekly newsletter, featuring the latest must-watch TV, moving personal stories, and expert advice on the hottest viral buys.