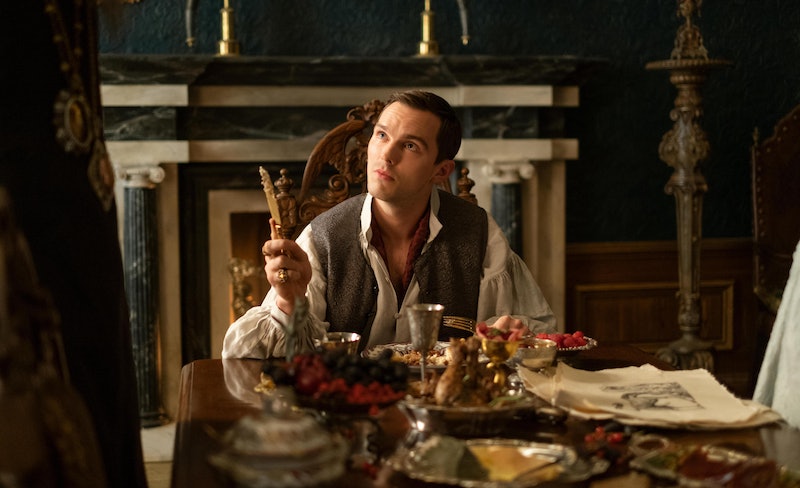 Hulu's new series, The Great, follows Catherine the Great and her husband Peter III of Russia, who died under mysterious circumstances after his brief ascent to power. In fact, he ruled for only six months — from January to July 1762 — before Catherine succeeded him, ruling for 34 years. No one seems to know definitively how the emperor died, but many historians believe he was murdered.

As depicted in The Great, Peter (Nicholas Hoult) was ill-suited for the throne. Not only was he quite unintelligent, but according to Encyclopedia Britannica, he strongly favored Prussia and hardly spoke Russian (he was half Swedish and lived in Germany for a large portion of his childhood). Furthermore, he and Catherine (played by Elle Fanning in the Hulu show) were polar opposites. Whereas the Prussia-born empress loved reading Voltaire and enthusiastically learned Russian, Peter was preoccupied with the military and loved playing with toy soldiers, per Biography.com.

Neither were faithful to the other; according to the History channel, Catherine even claimed in her memoirs that the couple's son, Paul, was illegitimate. It's also been rumored that Peter was infertile or that the two never consummated their marriage. Catherine's many lovers — who she entertained both during and after her marriage — included Sergei Saltykov, Stanislaus Poniatowski, Grigory Orlov, and Grigory Potemkin, among others.

After gathering support from the church, senate, and guard, Catherine overthrew her husband in a July 1762 coup, per Encyclopedia Britannica. Peter was imprisoned in a village called Ropsha and died eight days later. The official report says that he had nasty hemorrhoids and died of an apoplectic stroke, but most people don't buy that version.

Per Biography.com, experts contend that Peter either died by suicide or was killed while fighting with his guards. Many believe that he was murdered by Alexei Orlov (the brother of Catherine's paramour, Grigory), who was one of Peter's captors. Susan Jaques' 2016 book The Empress of Art claims that the emperor was strangled. Whatever the case, historians have not been able to conclude whether or not Catherine was complicit in Peter's death.

As for The Great, it's evident from the trailer that it will only loosely follow real history, so expect some major embellishments when it comes to Peter III's life, brief reign, and mysterious death.