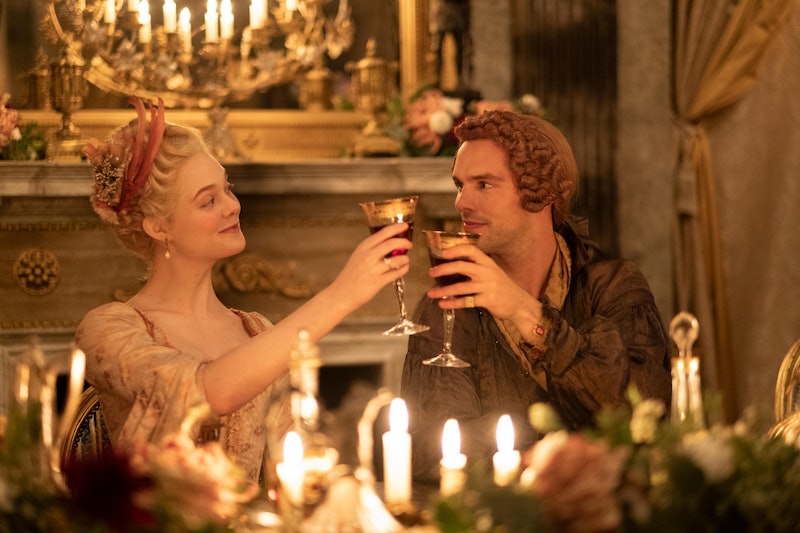 There's nothing like a great royal love affair, is there? Well, Hulu's new limited series is not the typical story of two lonely souls from opposing kingdoms coming together in the name of true love, but it might be even better. Hulu's newest trailer for The Great stars Elle Fanning and Nicholas Hoult as the world's hottest new royal couple, Catherine the Great and Emperor Peter the III of Russia. But as viewers will quickly learn, not all royal romances were fairytales. And this couple is far from Meghan Markle and Prince Harry.

The Great focuses on Catherine the Great's rise to the longest-reigning female ruler in Russian history, documenting her journey using only historical facts. Just kidding. The series takes a satrical and at-times nonsensical look at how Catherine came to power, which, according to a press release obtained by Bustle, involved beating the church, baffling the military, getting the court on her side, and most importantly, killing her new husband.

The new trailer shows Catherine becoming disgusted with Peter faster than Madison fell out of love with Peter Weber on The Bachelor. They clash on everything from decorum, to military, to Peter's foolish antics, like launching a dog off the balcony with a parachute. Basically, think of Hoult's character from the Oscar-winning film The Favourite, but more mischievous and without the cleverness or intelligence to back him up.

It's no coincidence that Hoult's character seems so familiar. Both The Favorite and The Great put a comedic lens on powerful female rulers in history, and that's due to creator Tony McNamara, who created the mini-series and co-wrote the screenplay of The Favourite. The key difference between the two is historical accuracy. While The Favourite is primarily based on facts and tales of Queen Anne, The Great takes much more liberty in depicting what actually happened to Catherine the Great, which Fanning thinks is key to the show.

“We pride ourselves on not being historically accurate, so there is room to experiment,” she said during a Television Critics Association panel, as per IndieWire. “You can look at so many oil paintings of someone, but they probably didn’t even look that way. So, it doesn’t help me so much as the script does with capturing the character that Tony has created, her essence, and what’s her journey.”

The Great starts streaming on Hulu on May 15.